North Korean Cars — made in the DPRK

Continuing our ‘Made in the DPRK’ series – featuring such gems as the Arirang smartphone, the Samjiyon tablet and the Red Star OS – we continue our look at the homegrown products of North Korea! Up next: the automotive industry of North Korea.

The punchline of the Eastern Bloc

Automobiles produced in socialist countries have always been a bit of a punchline. “Do you have a radio for a Trabant?” starts an old East Germany gag; “Sounds like a fair swap,” comes the devastating comeback. Trabants, Skodas, Ladas – all products of the Eastern Bloc automotive industry, and all with pretty bad reputations.

South Korean cars obviously have quite a good reputation – Hyundai and Daewoo being two reputable car manufacturers that spring to mind – but whilst their Northern counterparts have hardly set the world on fire, the country’s Juche ideology, which is all about self-reliance, means that the DPRK has been manufacturing its own vehicles since the get-go. 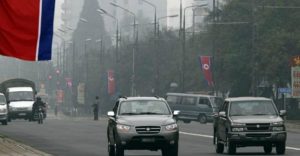 This doesn’t mean that they were manufactured completely independently, however; in the beginning the vehicles were produced in partnership, and licensed by, the USSR. Such gems as the GAZ-51, GAZ-69 and GAZ-M20 were produced locally in the DPRK under this partnership.

From 1950-2000 these cars were built in the Sungri Motor Plant, but from 2000 on, the automotive industry in North Korea was to receive an unexpected boost.

Founded in 2000, Pyeonghwa Motors in Nampo is an auto-manufacturing and retail joint venture between South Korea’s Pyeonghwa Motors (owned by Sun Myung Moon’s Unification Church) and North Korea’s Ryonbong General Corp. In case you’re out of the loop, the late Reverend Moon was simultaneously leader of the World Anti-Communist League and an investor in North Korea (for instance, he invested in the Pothonggang Hotel).

Most of the cars produced in Nampo are sold as cheaper alternatives to expensive foreign cars, and despite the limited market, the company has reported a profit.

The Pyeonghwa-Ryonbong partnership has even made the international jump, and the vehicles it produces are now sold in Vietnam! Interestingly enough, the only ‘private’ advertisement to be seen in Pyongyang is for the ‘Peace Car’ and its extremely congruous dove logo.

North Korean cars might never take over the world, but if sanctions are ever relaxed then this is one ‘Made in the DPRK’ product that might make it further afield.

Check out North Korean cars for yourself on one of our tours!

.
< PREVIOUS
Is the birthday of Kim Jong Un a holiday?
NEXT >
North Korea flag – History and meaning