Made in DPRK – Samjiyon Tablet

North Korea often unfairly has a reputation as a place where things don’t work, but it really should be remembered that they are also a nation under some extremely prohibitive sanctions. They are also governed by the Juche ideology of self-reliance, and, since day one, have at least tried to do things their way. It is with this is mind that we introduce our ‘made in DPRK’ series of products you may not realize are made in North Korea.

The Samjiyon Tablet is one of my favourite for a number of reasons. Firstly, it dispels the myth that North Koreans don’t do electronics, and secondly because I used to own one! Five years ago whilst visiting the Rason Trade Fair I purchased one and played with it for quite a while. Alas I don’t know much Korean, so it wasn’t all that much, but I digress. 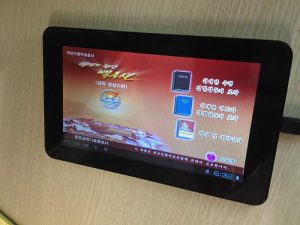 The Samjiyon was created by the Korean Computer Centre, the main people that make computers in North Korea. It works on the Android system, which obviously many people from the usual circles have criticized, but hey shouldn’t an open-source operating system like Android be much more socialist than Mac OS?

It comes preloaded with games, Korean language bits, and most things you would expect from a tablet.

Overall it is a good tablet, and I enjoyed having one. There are persistent rumours that the Samjiyon was made in China. Was it? I don’t know, but in my humble opinion I don’t see why it would have been. Then again, opinions are like arseholes: everyone’s got one. This is unlike the Samijyon tablet, where few people have one outside North Korea (except me).

Next in made in DPRK: the Arirang Phone!

Interested in getting your hands on some North Korean tech yourself? Check out our tours to the DPRK!

.
< PREVIOUS
Communist Culture in Yan’an
NEXT >
Made in DPRK – Arirang Smartphone