If you ask most people what they associate with the country Moldova, many can’t think of anything to respond. For those that can, the most common reaction is ‘poverty?’ Well… they’re right. Moldova has earned the brand, without trying, of Europe’s least-visited and most poverty-stricken country. Moldova is landlocked, has no natural resources outside of fertile agricultural land and has recently been relying on handouts from the EU to try and keep their country together. Unfortunately, a handful of politicians in the country embezzled the vast majority of this money and ended up stealing over $1 billion from the country (which is an eighth of the country’s GDP) before fleeing to a sunny island somewhere. As a result, infrastructure is in a critical state of disrepair, corruption is rampant, Moldova tourism is non-existent and unemployment is sky high.

On our Transnistria tours, we pay a visit to Chisinau, the capital of Moldova, as part of the tour. This is usually most of our customers’ first and last time inside the country.

Moldova tourism: why is nobody going there?

Firstly, Moldova is very disconnected with the rest of Europe. Finding cheap flight tickets is difficult, due to it being outside of the EU and a rather esoteric destination. The easiest way to get to Moldova is to fly to Bucharest, but which then involves a Soviet-era night train – not for the fainthearted tourist – or to go the even rougher way via the border with Ukraine. The latter involves navigating the breakaway state of Transnistria and, for those without knowledge of the Russian language, can prove difficult.

Secondly, the state fails miserably in promoting Moldova tourism; it seems to be the last thing on the government’s mind. Hence the reason that few people know what to associate the country with, or what there is to see and do in Moldova. 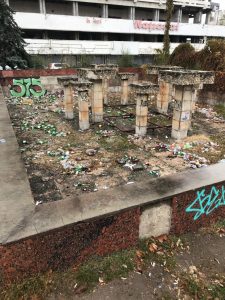 Thirdly, whatever reputation Moldova does seem to have is never positive. Europe’s most impoverished country conjures up images of lawlessness and crime, which is not true. In the 1990s, it was true that Moldova was an infamous smuggling route for everything from people and weapons to drugs and radioactive materials. Thankfully, those days are long gone. The people of Moldova are industrious and take whatever honest work they can to survive, and petty crime is not a worry when travelling around the country.

What is there to see and do in Moldova?

One of the country’s biggest exports is Moldovan wine, and it’s pretty damn good! A staple feature of all YPT tours to the country is the Cricova winery. Located just outside the capital city of Chisinau, it’s a vast underground network of caves which create and store one of the finest wines in the former USSR. Inside are the wine collections of many well-known figures such as Angela Merkel, John Kerry, Herman Göring (former collection, taken by the Red Army in 1945) . In the tasting suites that we hire out, we have the choice of ‘The Presidential Suite’ – where the president of Russia, Vladimir Putin, spent his 50th birthday party – or the Yuri Gagarin suite, where the first man in space spent three days drunk on wine and eating Moldovan food. 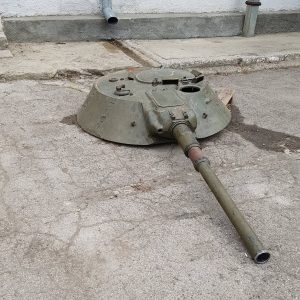 The country has a huge amount of ancient fortresses left from the many empires that stormed through this land countless times, monasteries (usually with an old Moldovan winery in the cellar), stunning scenery and hiking routes. Whilst not as widespread as its breakaway neighbour of Transnistria, Moldova also boasts a fair few crumbling communist monuments and relics dotted around the country. A YPT favourite is an abandoned government bunker in rural Moldova designed to protect against a nuclear blast. Today it is long forgotten and overgrown (wild Marijuana even grows inside the bunker due to the strange climate inside) but a great place for a YPT party with a difference. Nobody can claim we’re not doing our part for Moldova tourism!

What is the future for Moldova tourism? 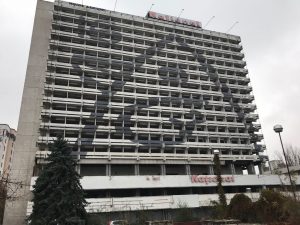 The reality is that the future isn’t bright. Outside Hotel Chisinau are two examples of sobering reality. Opposite the hotel is a crumbling hulk which was formerly the Hotel National, a business which collapsed due to lack of guests and now remains a stark warning for any foreign businesspeople who might think about investing in the country. Right outside Hotel Chisinau you will find a huge amount of minibuses and coaches all ferrying people out of the country to work abroad. Moldova is one of the worst countries in Europe for ‘brain drain’ and almost every lamppost is emblazoned with advertisements to basically get out of the country. For those who can’t work abroad (usually women) there are advertisements to sell their hair which, are then used for hair extensions in Western countries and labelled as ‘Russian Hair’. The EU has sent many grants to try and aid development in the country, but these grants have seemingly vanished into thin air. 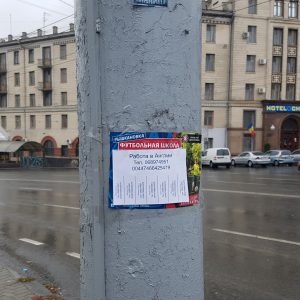 To see this fascinating but often sad country, you can join one of our many Soviet Europe tours to the region. Some of our tours to Moldova also include a trip into Gagauzia, the least-visited part of Europe’s least-visited country, and Soroca – also known as ‘the Gypsy Capital of Moldova’.