North Korea statues and monuments: the ten most iconic

In North Korea, statues and monuments are kind of a big deal — and nowhere are they bigger than in the capital of Pyongyang. Throughout the city you’ll find mosaics, statues and dioramas galore. Here are ten of the most famous. 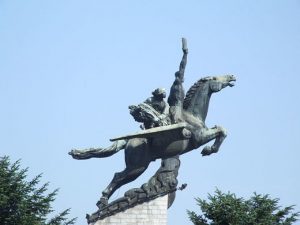 Of all the North Korea statues, this is one of the oldest: the Chollima statue was revealed on the 49th anniversary of the birth of the first leader, President Kim Il Sung. While a winged horse might seem an odd choice for the occasion, it commemorated a powerful post-war movement to rebuild the country’s devastated economy after the Korean War.

Chollima translates into 1000-Ri Horse (about 400km), and is a legendary horse said to be able to cover that distance in a day, so the horse was used as inspiration for Korean workers. Exemplary factories such as the Chollima Steel Works also received the moniker (it was previously known as the Kangson Steel Works, after the county it’s located in).

The monument features a male worker clasping a document from the Workers’ Party, and a female farmer holding a bushel of rice. The monument rises 46 meters from the ground, with the bronze sculpture atop reaching 14 meters high and 16 meters long.

Fun fact- ‘Chollima’ is also the nickname of the DPRK National Football team. 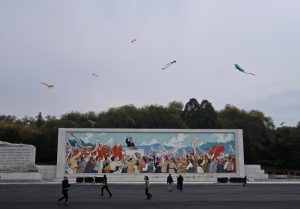 Situated at the base of Moran Hill and close to both the Kaeson Metro station and Kaeson Youth Park, this mural depicts the first speech given by Kim Il Sung after his return to Pyongyang. At the time he had earned a fair degree of fame for his role as an anti-Japanese guerrilla leader, but Soviet sponsorship of the event also surely helped to draw in a large crowd. The mosaic depicts a crowd waving banners and cheering fervently for the returned leader. Notably absent however, are the members of the Red Army and the Red Army medals that can be seen in photos taken during the event. 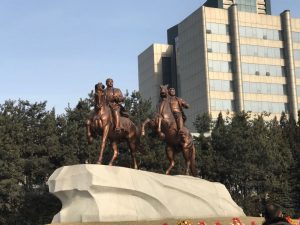 The Mansudae Art Studio is by far the most prestigious art studio in North Korea, with as much as half of all Merited and People’s Artists in the country said to work there. (‘People’s Artist’ is the highest title a North Korean artist can hold, ‘Merited’ comes second in rank, and ‘First Class’ is considered a top artist within their own province). Mansudae Art Studio is responsible for possibly all of the country’s large artistic works- from the Monuments at Mansu Hill to the Wangjaesan Grand Monument in the far northern county of Onsong.

So it’s fitting that one of the first statues of former leader Kim Jong Il appeared here- at the entrance to the studio can be seen bronze statues of President Kim Il Sung and General Kim Jong Il riding horses. With large portraits framing the buildings along side of each leader and a joint portrait opposite, it makes quite an impression on what would seem an otherwise modest complex at first glance.

While it’s the first publicly displayed bronze statue of the second leader, it wasn’t the first to be commissioned – statues such as the ones at the Revolutionary History Museum of the Ministry of the People’s Armed Forces, Kim Jong Il Military Graduate School and other restricted-access facilities predate it.

While this might be cheating a bit in terms of a mural, we think it deserves more recognition than it gets and is close enough. North Koreans are truly talented when it comes to the art of dioramas and it’s always a challenge to spot where the background painting begins. While there is more than one diorama at the museum, our favourite is definitely the creatively-titled ‘Construction of Pyongyang Metro’. The museum is currently closed for renovations, but with the excellence of these dioramas we’re fairly confident they’ll still be a feature after its modernisation.

Mansudae Art Studio was, of course, responsible for these Panoramas and has also famously created panoramas and dioramas for the Angkor Panorama Museum in Cambodia and Syria’s October War Museum. 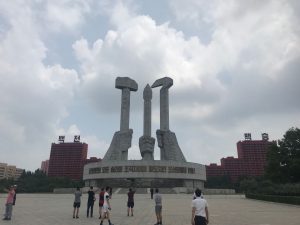 Perhaps another slightly iffy inclusion, this certainly leans miles away from ‘statue’ and into ‘monument’. However, it’s just too famous to exclude and its bronze reliefs are kind of murals. Also known as the ‘Monument to Party Founding’ depending on whether you prefer accuracy over fluency when translating, the monument features three hands: one clasping a sickle, one a hammer and one a calligraphy brush, representing the three key groups of society (worker, farmer and intellectual). The hammer/sickle/brush combo is also the symbol of the Workers’ Party.

Unveiled on October 10th 1995 for the 50th anniversary of the founding of the Workers’ Party of Korea, the monument is often the backdrop for Mass Dances and other performances during National Holidays, and is generally considered one of Pyongyang’s must-see sites. 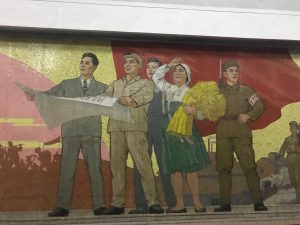 The Pyongyang Metro is famously deep, famously mysterious and famously ornate. While the first two stations in particular – Puhung (reconstruction) and Yongwang (Glory) – are the most spectacular, there are stunning mosaic murals to be found throughout the system. For anyone who’s a fan of Korean art or trains, it’s well worth looking for a tour such as our Unseen DPRK Tour which will visit every Metro station that’s available. It also bestows some bragging rights, as very few people have ever seen that much of the Pyongyang subway system. 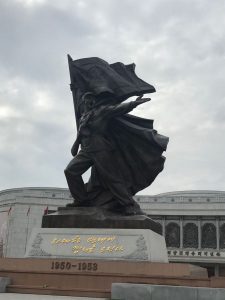 The centerpiece is the most commonly-depicted statue from the Korean War Museum, and stands directly in front of the museum, framed by the wings of the building behind and a fountain in front. However, while certainly the largest and arguably the most impressive, it’s only part of a group of statues that are found around the first stage of the museum. The others consist of bronze sculptures depicting Korean People’s Army forces fighting during the Korean War, and are also well worth inspection. 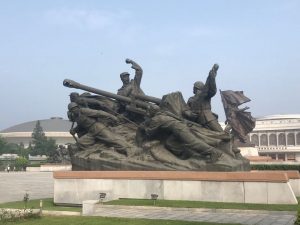 The outer area of Pyongyang’s War Museum also features a collection of captured enemy vehicles and equipment – most famously the spy ship U.S.S Pueblo, and another collection of “hero” aircraft and vehicles (Namely vehicles/aircraft that performed exceptionally during the war).

Just inside the entrance to the museum is also a coloured plaster statue of a young President Kim Il Sung during the war, which is often mistaken by visitors for the current leader Marshal Kim Jong Un, and seems designed to highlight their similarities. At this statue guests are usually expected to bow. It’s also not permitted to take photos inside the museum, but as there is plenty to see in the outside exhibits and there are refreshments and souvenirs available inside, so it’s still worth taking your wallet and camera or phone. 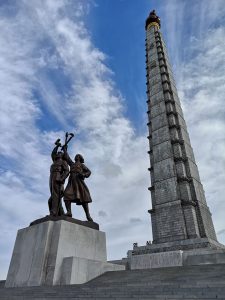 While visiting the Juche Tower don’t forget to take a walk down the steps to the river and check out the stunning bronze statue at the base, which was inspired by the famous 1937 Soviet work ‘Worker and Kolkhoz Woman’, which featured at the Soviet pavilion of that year’s World Fair in Paris. In North Korea, statues are bigger and better: it’s 30m high, outstripping its inspiration by 5.5 metres. Also unlike the Soviet statue, the Juche Tower statue includes the intellectual – as does the Workers’ Party of Korea itself.

It’s not only an incredible standalone sculpture, but its location with the tower behind makes it an inspiring shot, especially for anyone equipped with a fish-eye lens. There are also smaller statue groups in the park around the tower that are worth a quicker look. 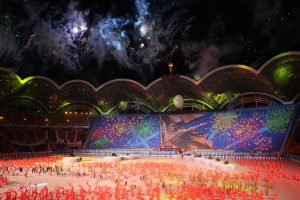 Often referred to by locals as the world’s largest mosaic murals, or more frequently/humorously these days as the world’s highest pixel screen, these images are made by literally thousands of students flipping coloured cards in perfect synchronisation. While Mass Gymnastics performances have been held on a national scale in North Korea since 1961, their history goes back even further than that. The Arirang Mass Games was when they first came to receive greater recognition in the West, and when they first were held in the famous May Day Stadium (in the 90s there were also mass game performances held in Kim Il Sung stadium, but with so few tourists they never came to prominence abroad).

North Korean Mass Games made a huge return last year for the 70th celebration of North Korea’s National Day, under the title ‘Glorious Fatherland’. Mass Games have also been announced for this year, with expectations being for a return in late June. This year they return under a new title: ‘People’s Country’. While the Mass Games in 2018 were updated with new technology such as drones and projectors, the famed card mosaics remained, and we hope to see them again this year. 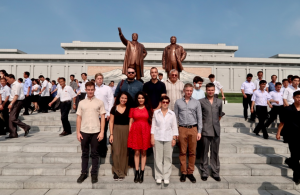 Whilst most pictures online show only the admittedly extremely impressive 20 meter tall Bronze statues of President Kim Il Sung and General Kim Jong Il, the monument also consists of two groups of sculptures in front of and to the sides of the monument. These represent the anti-Japanese struggle and the socialist revolution of the Korean people. In total the monument features 229 figures. It also includes the massive mosaic mural of Mt Paektu in the background behind the statues.

The monument was first unveiled in 1972 for the first leader Kim Il Sung’s 60th birthday (A very special anniversary in North Korean culture). Later, after the passing of Kim Jong Il in 2011, his statue was added and the original statue of his father was modified to show him at an older stage of his life and with the signature smile you’ll see on many portraits of him throughout the country.

While it’s often said that visitors must bow and present flowers when visiting the DPRK, this isn’t actually true for foreign tourists. Presenting flowers is completely optional, although if you elect to visit the statue you will need to bow; however, it’s not a mandatory stop for tourists at all. The dress code for visiting the statues is not as strict as Kumsusan Palace of the Sun, but guests should zip or button up any jackets or coats, remove any sunglasses or hats and not wear any overly informal footwear such as flip-flops or sandals.

See Pyongyang’s most iconic statues and monuments yourself on one of our tours!

Troy is YPT’s DPRK Managing Director and a University of Auckland Business School graduate. He has been regularly traveling to North Korea since 2008 and has visited pretty much every place a foreigner can.