What are the differences between Sudan and South Sudan

Sudan,  which used to be Africa’s biggest country, was split in two after a civil war — from which emerged the world’s youngest country in 2011, South Sudan.  As it used to be the same country, you might think there aren’t many differences between the two, but you couldn’t be more wrong! In this article we will check some of the differences which make Sudan and South Sudan such varied countries, both worth visiting!

First thing first, the two countries couldn’t feel any more different! Sudan is definitely within the Arab sphere of influence and shares a lot of characteristics with other Northern African nations, most notably Egypt. Indeed, Sudan is filled with mosques but also great pyramids and temples from ancient nubian times. You won’t find clubs or alcohol here! Most of the buildings are quite old either from the british times or the Muslim times.

South Sudan, since its creation, has been gravitating around the East African sphere of influence. You’ll find that it has a lot in common with countries like Rwanda and Kenya. The presence of NGO is very notable and you are very likely to bump into blue helmets as well as NGO workers when you go out for a drink in one of the many bars of the capital.

Sudan is one of the strictest Muslim countries in the world. It is known for its application of  Shariah law on many matters and relationships between unmarried/unrelated men and women are heavily scrutinised. As with most Muslim countries,  modesty in dress is preferred, and lots of women there wear burkas. Alcohol and pork are banned in Sudan. The government of Sudan is an Islamic government and expect the people to follow Islamic principles. Sudan is also known to share the sense of hospitality many predominantly Muslim countries are known for, and Sudanese are known to make exceptions to their rigorous lifestyle when it comes to visitors who they know might not share their lifestyle. 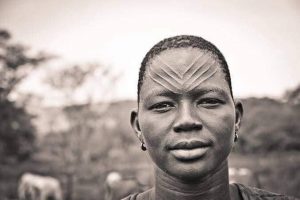 South Sudan, in comparison, is a mostly animist and Christian country. As such, it is quite a melting pot of beliefs and taboos and is not standardized. Some tribes prefer living naked while others have adopted Western clothing. A myriad of fashion styles can only be seen in South Sudan like intricate tattoos and traditional scarification. Many beliefs of South Sudan, one of the world’s least visited countries, are still unknown to the rest of the world, a situation similar to Papua New Guinea. It is a goldmine of ethnological and cultural variety. 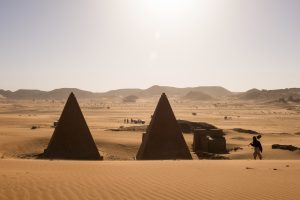 The north of Sudan has always been the historical centre of empires, such as the Nubian dynasties. It has always been a centre of wealth and, as such, has many sites to visit such as the the Pyramids of Meroe and a multitude of mosques. The Sudanese style of architecture, found in the north, has influenced the whole of North Africa, with houses of its style found as far away as Mauritania and Mali, on the other side of the continent. It has connections to Egypt by ferry and airports with frequent flights to the rest of the world.

South Sudan’s infrastructure, on the other hand, is extremely limited when compared to the rest of the world. One paved road connects Juba to Uganda and the rest of the roads are mud roads. It is an emerging country in all senses. It might be tomorrow’s booming economy however, as it has the third-biggest oil reserves of Africa. Those oil reserves were a central point of tension during the civil war and most drilling was stopped due to the facilities being destroyed during the conflict. Multiple NGOs as well as Chinese companies are invested in the country and the infrastructure of Juba are quickly improving. For example, Juba airport was only a tent a couple of years ago whereas it is now a complete airport with even retina scans!

Arabic is the sole official language of Sudan. It is its own variety of Arabic, on the same level as Egyptian Arabic, Levantine Arabic or Moroccan Arabic. The intelligentsia of Sudan can also speak Modern Standard Arabic or Al Fusha.

In South Sudan, the official languages are both Arabic and English, with English being more and more favoured. English is used as the lingua franca between tribes, which all have their own languages and dialects.

South Sudan has had 7 years now to build its own political structure and it is already quite different from the government of Sudan. Their constitution is still a transitional one, where many powers are given to the President in order to keep the order of this fragile country and the people who are leading the country are those who were at the head of the independence movement. The government already has its assembly and their own currency, the South Sudan Pound. The first elections of the country are planned for 2021.

The government of Sudan, on the other hand, has been in power since 1989 after a coup led by the current president, Omar El-Bashir (update: now former president!). The creation of South Sudan forced Sudan to rewrite its constitution, which now has 26 states led by governors and ministers. Where South Sudan has a coalition government (with three vice-presidents at the moment), Sudan had a heavily centralized government with El-Bashir as the centre of most committees.

The best way to discover the differences between these two fascinating countries, however, is to book our tours to both countries. YPT currently has a group tour scheduled to Sudan and can organise independent tour to South Sudan.

.
< PREVIOUS
How to Get a Visa for South Sudan
NEXT >
Victory Day Parades in the former USSR