Victory Day is a holiday that commemorates the surrender of the Nazis in 1945. It was first inaugurated in the 15 republics of the Soviet Union, following the signing of the German Instrument of Surrender, late in the evening on 8 May 1945. It is one of the most important days in the Russian-speaking world and in all countries who fought on the Soviet side in WW2.

Seeing a Victory Day parade should be on the top of the bucket list of all communist history nerds. Typically beginning with a gigantic Soviet-style military parade, followed by patriotic speeches and national displays, the celebrations typically roll on into the night with all sorts of fascinating (and sometimes bizarre) side shows going on.

With May 9th a staple date in YPT’s tour calendar, we decided to list the best places to watch a Victory Day parade in the former Soviet Union:

Naturally, the best place to see the parade is in Moscow. The parade takes place in Red Square, the place where the captured flags of the Third Reich were lowered and trampled on in 1945. This is undoubtedly the most grand of all Victory Day parades. The problem is, getting a seat at the actual parade is impossible for the average person, unless you’re close mates with Vladimir Putin or a president of a former Soviet republic. But there is good news: the days running up to Victory Day are rehearsal days which are open to the public with tanks, preparation military parades and concerts that roll on into the night! 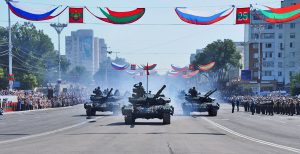 It should come as no surprise that one of the best Victory Day parades can be found in the Soviet rebel republic of Transnistria. The territory was the site of the Jassy-Chisinau offensive, a bloodthirsty push into Bessarabia. The land of Transnistria is still littered with bunkers, trenches and rusting war remains to this day. Each year YPT run a tour to take part in the celebrations. Whilst not as big as Moscow’s, the Transnistrian parade is still very impressive and the public are allowed to attend, with tanks often rolled out and celebrations running well into the night with cheap vodka and shashlik. After the parade, if you still don’t have your fill of Soviet nostalgia, we often travel out of the city to the civil-war-ravaged villages with bullet-riddled Lenins and Soviet palaces of culture. 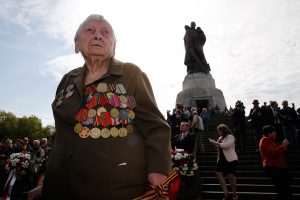 Since the collapse of the DDR, Berlin still has many Russian expats. Every year on May 9th, they gather together at Treptower Park – a memorial complex with many Soviet monuments including the hulking Soviet Soldier and Child staring down upon all of them. Many Russians also travel from abroad, including the infamous Russian motorbike club ‘’The Night Wolves’’, to pay their respects to their fallen relatives and celebrate Victory over the Nazis in the former capital and site of the last major battle on the Eastern Front.

Located in Belarus – referred to as “Russia’s little brother” – the Minsk Victory Day parade is a big deal. The city was the place where the infamous ‘’Operation Bagration’’ culminated; the offensive led to the destruction of the German army group centre and the Soviet capture of Belarus and Eastern Poland. Over 150,000 German prisoners of war were marched through the streets of Minsk. Rumour has it that the Russians fed them soup with rotten meat the night before, to ensure diarrhea on the parade in front of the local population. The last destination was Siberia. The parade features a military parade with all the important people in Belarussian life and politics present. It’s also one of the few places that feature a parade of dump trucks to celebrate the famous Belarussian dump truck company of Belaz.

To witness a Victory Day parade for yourself, check out our Ultimate Transnistria Victory Day Tour. Alternatively, if you wish to visit another location for Victory Day, we can also organise affordable independent tours with ease.

.
< PREVIOUS
What are the differences between Sudan and South Sudan
NEXT >
What is Nowruz?