As a peninsula, Korea as a whole only share two land borders with other countries. Those borders are exclusively found in North Korea, with South Korea only sharing sea borders with China and Japan. North Korea has borders with Russia and China, which are two of its few economical allies. The border with China, certainly, is the most important.

The border between China and the Democratic People’s Republic of Korea is 1,420 kilometres long and is composed of two rivers and a mountain. The two rivers are the Tumen River and the Yalu / Amnok River with the mountain non-other than the most important mountain to the Koreans, Mt. Paektu, known as Changbaishan to the Chinese.

At some points, the border between the two countries gets extremely narrow, such as in Changbai city, where people are really a stone’s throw away from the DPRK. 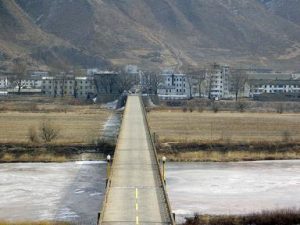 The China-North Korea border is home to an impressive number of border crossings, 26 to be more precise, including defunct ones and some under construction, Most of these borders are used for trade and not for tourism. At the moment, only five borders can be crossed by third-country nationals. The border has often been described as the lifeline of the DPRK, which is under sanction and cannot get much products from the outside world outside of China, since the fall of the Soviet Union. Over ninety percent of the DPRK’s trade is with China.

The Sino-Korean border has evolved through history and some cities now belonging to China were in fact Korean cities in the past, this even includes an ancient capital of Korea, now known as Ji’An to the Chinese. This explains why a very high number of ethnic Koreans can be found in China, along the border, especially in the region of Yanbian, in Jilin province. Many islands are on the Yalu River and instead of cutting them in half along the border, these islands were distributed to both countries following a border treaty signed in 1962. Along the river, 78 were given to China and the rest were given to North Korea.

The biggest city along the border is Dandong in Liaoning province. Dandong is also known as the main land-entry point for tourists heading to the DPRK. The second most common border for foreign tourists is the border between the cities of Tumen and Namyang, the main access point to the province of North Hamgyong. Other border cities, such as Linjiang City also fill an important role in the trade between the two countries.

Want to experience the entire China / Korea border for yourself? Check out our upcoming Borderlands tour – the road trip of a lifetime.

.
< PREVIOUS
Is Eritrea truly the “North Korea of Africa?”
NEXT >
7 Amazing Photos of Korea before the War