Aside from Young Pioneer Tours regularly blogging about our budget tours to North Korea and the many new North Korean Tourist attractions that pop up in Pyongyang and other cities, we also try and do the odd piece about the wider issues and interests of the DPRK, so we carry on the Borderlands Series with our fifth part: Linjiang City. 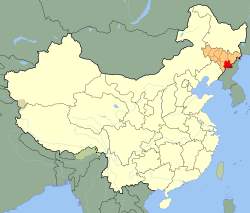 Linjiang City (literally Lin-river city) is a county-level city in southern Jilin province. The city briefly served as the capital of the Japanese puppet-state of Manchukou, led by the last emperor of China, Pu Yi. It has a population of 190,000 people, most of whom are Han Chinese. As you approach Linjiang from the road leading into town, the mass of bright lights create excitement, due in part to it looking like a mix between the worlds biggest Christmas party and Las Vegas. This excitement fades quickly upon arrival when one discovers it is not, in fact, anything like Las Vegas. That taken aside, Linjiang is quite a pleasant town with a nice offering of decent food, interesting scenery, and some great views of North Korea.

By plane: The nearest airport is in Baishan which tends to offer seasonal routes to most major Chinese cities and even a few cities in South Korea. Depending on the time of year the airport is about a five-hour drive from the village.

By train: Linjiang has a small regional train station that services most major cities in the province.

By bus: There are regular buses headed east to Changbai Mountain, as well as west to Linjiang which can be flagged from the main road.

Being a pretty small town, most of Linjiang can be navigated by foot unless you need to head out to the outskirts. If you do need a taxi they are easy to catch, and start at just RMB 5 per trip.

Being so close to Korea there are plenty of Korean restaurants and influences but- generally speaking- it is a Han area with the locals speaking their own regional style of Mandarin.

Being rural China there are plenty options to suit most budgets and tastes but, again, very little that is exciting or worth writing home about. Fortunately in Linjiang they are a little bit more relaxed about which hotels are allowed to host foreigners.

Want to learn more about the Borderlands of North Korea?

.
< PREVIOUS
How we moved to Central Asia, and why
NEXT >
Celebrating New Year’s Eve, Uzbek Style