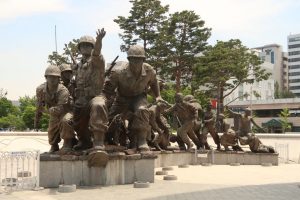 After your visit to Pyongyang’s Victorious Fatherland Liberation War Museum – a must-see and staple on any of our Ultra Budget tours – learn about the South’s versions of events at Seoul’s War Memorial of Korea. Seeing both sides’ impressions of the Korean War is a fascinating insight into the differing ways the world documents history.

Recently shared by both Kim Jong Un and Moon Jae-in during their inaugural summit in April 2017, Naengmyeon, or, Pyongyang Cold Noodle Soup, is similarly enjoyed down in the South. Show the waiters you know your stuff by requesting the essential hot mustard, vinegar and soy. Perfect on those hot summer days. 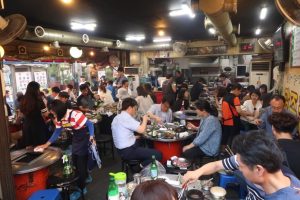 Just a short stroll to the next metro station is the Dongdaemun Street Foot Market. Here you’ll find a huge array of local foods at dirt cheap prices – be it sundae (blood sausage) or tteokbokki (spicy rice cakes), wander the markets and refuel for the day with some delicious Korean street food. 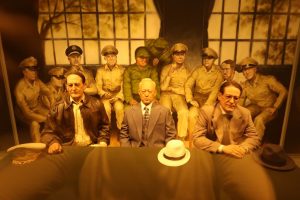 For history buffs, head to the Seodaemun Prison History Museum. The prison was used during the Japanese colonial period to incarcerate Korean liberation activists and used by the South Korean government after liberation in 1945. Opened in 1992 as a historical site, seven of the prison complex’s original fifteen buildings are now preserved with the History Hall acting as a memorial, showcasing those imprisoned during Japanese colonial times.

Go to a political rally

Witness Seoul’s fierce democratic political climate by attending a political rally happening in the city. If available, head down to the Blue House to see the executive office and official residence of President Moon Jae-in. 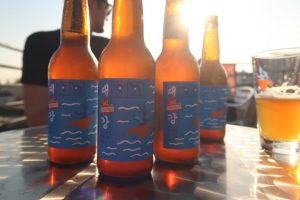 While not the same Taedonggang beer you may have developed a penchant for while travelling in North Korea, the southern counterpart is a controversial “better” version, although we’re not too sure about that statement! With the ‘Gang’ portion of the label censored due to conflicting interests against North Korean sanctions, the southern Taedonggang beer is much bitter and floral, verging on Indian Pale Ale levels of hoppiness. Still goes down a treat in the sun though.

So you’ve visited the Pyongyang Metro on our Unseen DPRK & Entire Metro Tour? Compare your experiences with Seoul’s extensive metro network of 21 lines running from 5.30am to midnight, connecting the entire city’s must-see sites. Pro tip: Most metro stations have free wifi available to help navigating to that next location. 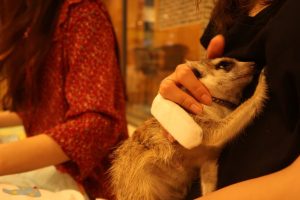 There’s no shortage of weird n’ wacky things to do in Seoul, and top of the list is almost definitely visiting a Meerkat Café. Live out some peoples’ life long dreams of cuddling meerkats and allowing them to climb all over you and groom you after a long day out in the city. If meerkats aren’t your thing (…uh, what?!) there’s raccoon cafes, owl cafes, cat cafes and puppy cafes – so take your pick!

From May to June 2018, head down to an extremely homely bar, aptly titled ‘the Living Room’ to catch YPT friend and past traveller Alicia Janeiro’s photography exhibition “Behind the DMZ: A Traveller’s Photos of North Korea.” Alicia’s taken some superb snapshots of life in the DPRK, with all prints available at affordable rates.

Live it up in the neon-lit jungle of Gangnam 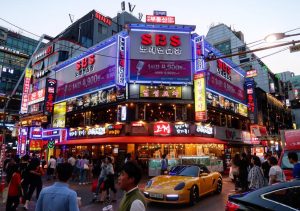 Tonight’s dinner is on the person who inevitably yells ‘OPPA GANGNAM STYLE!” (please don’t). A visit to Seoul’s trendiest, upmarket neighbourhood of Gangnam is essential, with more restaurants, bars and designer goods stores you can poke a stick at. Missing the newly acquired karaoke skills you picked up in North Korea already? Soak up the atmosphere and head to one of the many KTV’s to sing the night away.

Visit the South Side of the DMZ

After visiting the Northern side of the DMZ on any of our full tours or as a DMZ extension, contrast the experience on the South side and marvel at the fact that you were recently mere meters across that very DMZ line running through Panmunjom. You might even recognise your Northern DMZ military guide peering over at you into the South. 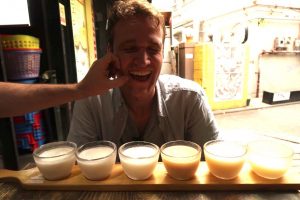 Take your pick of the many bars and micro breweries focusing on brewing makgeolli AKA fermented, unfiltered rice wine. With a sweet, often fruity or nutty taste, order a flight to sample the range of different flavours and varieties available.

Blow your savings and party in Hongdae

Head to Seoul’s University Town and main youth nightlife centre for partying, drinking, eating and shopping: Hongdae. An assault of the senses, if you can’t find fun here you’re doing it wrong. Explore the streets and watch as massive crowds gather around budding vocalists or aspiring K-Pop dance troupes and boy bands strutting their stuff to screaming, adoring local fans. That mass dance in North Korea feels a long way away now and we’re not in Pyongyang anymore, Totto. Our pick of watering holes is a relatively hidden local dive bar by the name of Bar Da, with an impressive (and very affordable) whiskey selection – bonus points for finding it.

Eat Korean BBQ: Lots of it. 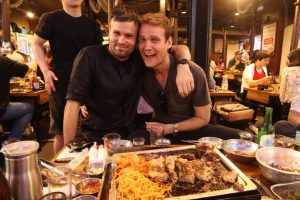 No really, eat yourself stupid with some exceptional Korean BBQ this side of the DMZ. You can’t really go wrong with fatty slices of beef, pork ribs or lamb, combined in a lettuce parcel of perfection with garlic, kimchi and “special sauce.” Wash it all down with a communal bottle of soju. Heavenly.

While you’re in the Hongdae area, take your significant other or group of travelling pals for a picnic or cheeky soju at the idyllic and very vibin’ Gyeongui Line Forest Park. Perfect to visit at dusk with loads of affordable eateries and watering holes a mere stone’s throw away.

Watch the sunset at a rooftop bar in Itaewon

Take it all in and watch the sunset over the city in one of Itaewon’s Rooftop Bars. The perfect end to any day with impeccable, 360 views over the city.

Already visited Seoul and you want to see what life’s like over in the North?

From study tours, political interest tours, bicycle tours, photography tours and every National holiday in North Korea – check out our list of upcoming group tours to find the tour exactly for you.