Young Pioneer Tours Chinese-speaking guide John describes his recent trip to Yanbian, on the China-North Korea border, with an American family who adopted from China. It was Nora’s first trip back to the place she was born and first time to meet her Chinese adoptive family who looked after her until she was 3.

“I’m not going on any boat!” Teressa insisted as we approached Tumen, the Chinese city separated by just the narrow width of the Tumen River from North Korea. I knew Lisa would be up for it, and Linda is famed for not wanting to miss out on things, so she would be in, and Nora was up for any adventure. In the end as we walked up to the river in Tumen’s main square, in the biting November cold, our problem was solved for us, as the river was totally iced over 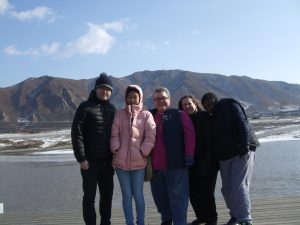 “Not to worry, let’s climb that hill,” I said, where we could get a great look over the other side, right into Namyang in North Korea. “It might be a bit windy so bring your scarf and hat.” Famous last words, which Lisa in particular enjoyed repeating back to me. “It might be a bit windy eh John?” Buffered by an icy gale, we still made it to the pavilion, took our photos, and everyone else left for the car as Nora and I made our way up further, looked around the sculpture park and wound our way back along the snowy path through the forest, getting even greater views of the Korean villages on the other bank.

The Yanbian Ethnic Korean Autonomous Region in Jilin, northeast China, is not the best spot for a holiday in November, it must be said. But we were not there on a normal tour.

I was with Nora and her family, from Kansas City. Nora was adopted from Jilin province ten years ago, and this was her first trip back to the place where she was born.

Our plane from Beijing landed into Yanji, the main city in Yanbian, with the snow having been cleared from the runway again that morning. Our driver, Mr Yang, picked us up and we headed straight to the hotel and then out for lunch.

Our first lunch was of classic northeast China dishes – disanxian, a mixture of potato, green pepper and eggplant, and the local specialty of guobaorou, sweet fried pork. We liked this dish so much it would end up on our menu at every opportunity! 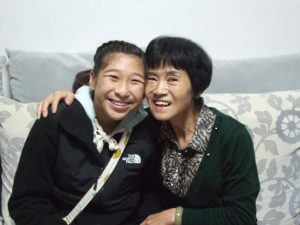 That afternoon we went to see Nora’s ‘nainai’, her Chinese granny. Nora had lived in an orphanage in Yanji, and Yang Yi, one of the workers there, had arranged for Nora, along with her ‘brother’ Zack, to live with her mother, Nora’s nainai.

Armed with the traditional offering of fruit, essential for a visit to somebody’s house, we arrived at the door, and the closeness of the two families, who had never before met but who were united through Nora, was immediate.

Nora sat on the sofa next to her nainai, arm in arm, looking through photo albums of her early childhood, while Lisa brought out albums showing Nora’s life in the US. Nora was able to ask questions about her childhood, and her nainai was able to ask about her life in the US. They were not surprised to find that Nora had become so sporty, particularly good at running, recounting how she had started running everywhere as soon as she was able to walk!

As translator, I was trying hard to be as accurate as possible, and to not be affected by the rising emotion of the occasion.

Nora’s nainai began to recount her feelings on the day that Nora left for the US. Nora was taken by the adoption agency to Changchun, where she met Lisa, and her nainai spent the whole evening on the floor sobbing. Her husband and daughter left the house, leaving her to her emotions. But, she said, it took six months for her to recover from that evening, losing Nora.

She continued. “It was the right thing to do though. Nora is lucky to have her family and her life in America. That night I thought I’d never see her again, so to have her back today and to see all of you is really special.” 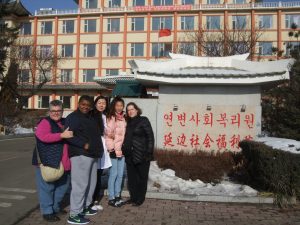 The next day we went to the old orphanage. The orphanage had moved to a different part of town, and the old building was now a retirement home, and nainai’s daughter Yang Yi still works there. She showed us the room that Nora had slept in before she moved in with her nainai, and the room that used to be the playroom.

Afterwards we journeyed down to Tumen, and then on to Hunchun, the city where Nora was born. Now a modern, well-off city, Hunchun is dominated by a central strip of restaurants, bars and karaoke houses. We had more great food: Korean bibimbap – clay pot rice, pork and vegetables – and even went to a North Korean restaurant where we had Pyongyang Cold Noodles and an array of dishes, with kimchi to spare. Hunchun is near the tri-country border between China, North Korea and Russia, so we couldn’t leave without a Russian lunch of borsch!

We wandered around the city centre, looking through the department stores and supermarkets, walking through the main park, giving Nora a feel for the place where she was born. 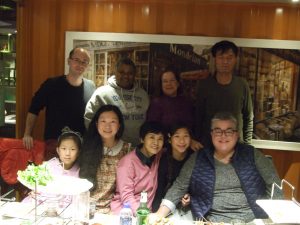 For our last night, we returned to Yanji, going out for dinner with Nora’s nainai and her family. We went for barbecue, a great mixture of beef, lamb and chicken alongside kidney and even cicadas for the more adventurous, which included Nora! By this time, we were all close, and it felt like a barbecue with old friends. We all hugged as we parted and got into our taxi, “come back again soon Nora,” her nainai said with a big smile on her face.

Just before bed, relaxing in the hotel bar with a beer, I said “next time you come back try to make it in the summer when it’s not so cold. That way we can definitely get a boat trip on the river.”

Teressa’s eyes lit up. “I’m not going on any boat!”

.
< PREVIOUS
The Top 7 Soviet Jokes – Newly Declassified!
NEXT >
What’s it like to play golf in North Korea?