On the night of the 26th of November 2015, Young Pioneer Tours were lucky enough to be the first – and still, only – foreign tour group to attend the Turkmenistan Independence Day Celebrations in the newly redesigned Ashgabat Stadium. 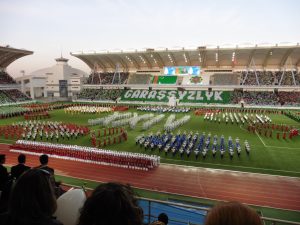 Our group of ‘Young Pioneers’ if you will, were on their best behaviour. We wore traditional Turkmen hats, waved our Turkmen flags and clapped along enthusiastically to Turkmenistan’s answer to the Mass Games that North Korea is famous for. We stood when we were meant to stand and actively participated in what was no doubt a once in a lifetime experience for us all.

It was quite surreal being in the stadium, seeing the choreographed dance movements by tens of thousands of performers, somehow perfectly and gracefully moving in time with one another. One thing different to the Mass Games you might see in North Korea or a similar event you might see in China, is that they also included some more lighthearted moments such as kids on roller-skates and a group of cyclists doing a lap of the stadium in a mock race. This was meant to showcase the President’s emphasis on health and fitness. 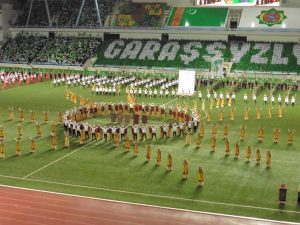 On the 27th, I received notice that due to our good behavior, the Tourism Minister had decided to let us attend not the original horse themed event we had been invited to, but instead, we were invited to the top horse themed event. An event which HE would be at. The Akhal Teke horses are the pride of the Turkmen people; these horses appear on their national emblem, they have pictures of them posted around the streets and as such a lot of events either feature these noble creatures or focus entirely on them. A famous tale tells of the near destruction of the Akhal Teke horses during the 1920’s and 30’s.

The Soviet Union experiencing civil war and starvation ordered that these horses not only have little emphasis placed on their survival but should be eaten to save other precious food supplies. A group of Turkmen took it upon themselves to ensure the Akhal Tekes’ survival and rode a herd of them from Ashgabat to Moscow across the hard and harsh conditions between the two places. On their arrival in Moscow, the powers to be were so impressed by the horses’ hard working and noble characteristics that they decided to preserve them. 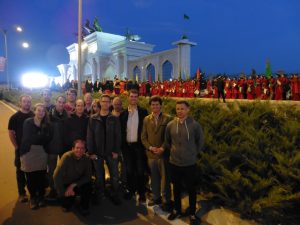 One problem with being upgraded to such a prestigious event was that we had to leave our hotel at 6 am to arrive at 7 am for a 10 am start. Of course as we were told many times, “you guys are lucky, most people have been here since 3-4 am!”. The other problem, of course, is no one was really sure where we fitted into the grand plan of the event. To start off with we walked into the complex down one of the most magnificent carpets one could lay their eyes on. It was only when we noticed no one else dared stand on the carpet and in fact were jumping over it to get to the other side that we realized this carpet was meant for one guest only. 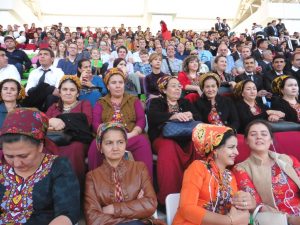 Another thing we hadn’t really realized is that during the lead up to the event and the event itself, no one moved from their seats. Getting up and leaving was not really an option. Of course one of our group naturally eventually needed the bathroom. Upon them getting up and heading to the exit, 5 men in black suits had already jumped up “Where are you going? What do you want?” they yelled, except their yelling was more like strained whispering as they also couldn’t possibly cause a scene.

Amongst these and other little indiscretions, our biggest mistake was attempting to bet on the outcome of the event. Our own Young Pioneer Leader Eilidh from the start ensured she knew which horse the President owned in each event, as it was clearly the best and always won every race. So the biggest mistake, don’t attempt to bet on a Presidential horse race with Eilidh.