Dead goat polo, belt wrestling and eagle hunting – the Nomad Games are exactly what they sound like. Beginning in 2014 with only ten sports, this is the third time the event will be held on the shores of Lake Issyk Kol, and this year there will be thirty-seven sports, with 3,000 athletes from 80 countries taking part. There are all the countries you’d expect to be involved like Kazakhstan and Mongolia, but you might be surprised to see teams from the USA, Germany, Canada, the Netherlands, France and Switzerland, competing in archery, horse racing, falconry, and taigan hunting, just to name a few.

Not only can you see some of the most obscure sports you’ll ever have come across, but there’ll also be a traditional nomadic village built nearby in the picturesque Kyrrchyn Gorge. A large yurt village will be set up, based on the times of Genghis Khan, with hundreds of yurts and wooden constructions and loads of people in national dress. Various customs and traditions will be displayed – from the birth of a child and his first steps to a spectacular equestrian show.

This can be done as a stand-alone tour, paired as a combo with the Kyrgyzstan Independence Day Tour or for the ultimate adventure join us before on our Central Asian Summer Combo Tour! 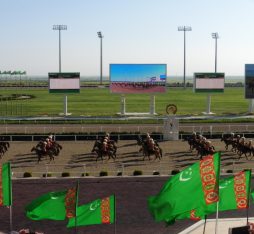