Welcome to Samarkand, one of Central Asia’s oldest inhabited cities.

Located in modern day Uzbekistan, a large number of ethnic groups still call Samarkand home. Thus, it is a city of preserved history and culture of not one group, but many groups – and is even recognized by UNESCO as the “Crossroads of Cultures.”

While your feet can’t always travel,  your tastebuds still can. In this series, we’ll be sharing some of the traditional (and might we add – delicious!) recipes from Samarkand, found in Carline Eden and Eleanor Ford’s book, “Samarkand.”

Central Asia has vast flat plains, including the world’s largest steppe region, ‘the Great Steppe’, as well as mountain regions. This expanse of grassland is renowned for its rich, smooth dairy products made from cow, goat, sheep, horse and even camel milk. Suzma is a tangy yogurt cheese which is spooned into soups, mixed into salads or eaten with bread and fresh tomatoes as a simple meal.

You can make your own yogurt-based suzma as in this recipe, or substitute the yogurt for cottage or cream cheese, sharpened with a squeeze of lemon juice. Start a day or two before you want to serve. Season the yogurt with a generous pinch of salt. Hang a muslin bag over a bowl, or line a colander with two pieces of kitchen paper and set it in a shallow dish. Pour in the yogurt and tie the muslin at the top to form a tight bundle (or cover the colander with clingfilm) and leave in a cool place for 24–36 hours for the liquid to drain off and the yogurt to thicken. Discard the liquid. You can either eat the suzma as it is, or flavour it in one of the ways below. 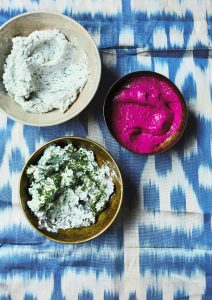 Finely chop the white and green parts of 4 spring onions, and a small bunch each of coriander, dill and flat-leaf parsley. Stir through the suzma and season with salt and pepper.

Stir in 1 crushed garlic clove and 1 teaspoon of finely chopped dill. Season with salt and pepper.

Blend 2 cooked beetroot until smooth. Stir into the suzma with 1 teaspoon of sugar. Season with salt and pepper.

Want more than just a taste?

Join us in Central Asia this summer

.
< PREVIOUS
Colour and Creativity – Travelling to Somaliland
NEXT >
Must-Have Tools for a Perfect Camping Experience