On board the highest train in the world

They say that time runs slowly on the railway to heaven. Not least when your iPad, packed full of movies and tv shows, decides to break a few minutes into a 41-hour journey. Well the journey is part of the destination, right? Here is my recollection of my trip on the train to Tibet, the Beijing-Lhasa train.

Leaving the sprawling city of Beijing at 20:00 sharp you become quickly acquainted with your room companions as evening falls, middle-class Chinese holidaymakers taking advantage of the early summer just before peak season. You also note the emergency oxygen outlets by every bed for our destination is Lhasa, the provincial capital of Tibet, and you will be undertaking the highest train journey in the world.

For the first 12 hours the train races through the heartland of China, skirting over the edges of the vast Gobi Desert before in the afternoon gradually making the climb up onto the Tibetan Plateau where you begin to spot the occasional yak and antelope across the expanse. You now have adventure access Tibet!

As a solo independent Western traveller on board the train you are viewed as a both a curious and minor celebrity. Expect to be politely but persistently invited into compartment after compartment for photographs, swapping of WeChat numbers and of course the obligatory shots of baijiu (a delectable grain-based liquor around 45% ABV).

The train and compartment itself are clean, comfortable and there is no lack of washing facilities or hot water dispensers. Food wise there are only so many instant noodles and snacks one can eat and so the dining car is gladly welcomed. Expect a set meal of diced beef (yak?), rice and soup for 40 CNY. Conversations are enjoyed with nearly everyone in the carriage via Google Translate – security officials taking up their shift in Tibet, students on a group trip, photographers heading up to the Himalayas.

The train now crosses past the clear blue Qinghai Lake, the largest in China, before taking the Tanggula Pass through the mountains. Reaching a maximum height of 5,072m above sea level and surrounded by snow peaked cliffs, you understand the effort and expense that has been put in place to build the railway. Parts of it are even built on permanently frozen ground, supported by bridges and venting pipes.

On the third day you skirt around the sapphire Namtso Lake and start to see small villages and herds of grazing livestock. Rumbling through the countryside the ground flattens, although you are still at an altitude of 3650m.

The train roles into Lhasa precisely on time and as you step out of the train station you are confronted with an endless sky and mountains all around. A quick perfunctory stop at the nearby security bureau to check your permits and you are free to go. A short shared taxi-ride finds you in the old town, a bustling neighbourhood full of fluttering prayer flags and incense smoke. You find yourself in front of the 1300 year-old Jokhang Temple, the centre of Tibetan Buddhism surrounded by groups of pilgrims prostrating themselves outside. You have arrived at the roof of the world.

Visit Tibet with YPT on our annual summer trip! 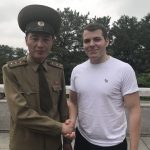