Mass Games 2019 have been confirmed! We have just got some exciting news from our partners in Pyongyang that the Mass Games will be starting in late June this year and running all the way through October, giving everyone that comes to Pyongyang during the summer and fall seasons a chance to see the greatest spectacle on earth: the Mass Games, which this year will be titled “People’s Country”.

A mixture of incredible martial arts, fantastical music performances, electrifying gymnastics and breathtaking live theatre performances with over 100,000 performers, the North Korean Mass Games are a spectacle like no other in the world. 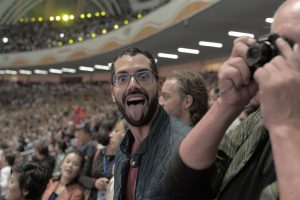 We are extremely pleased to announce the following summer tours to North Korea will also now include Mass Games. To see the full list of 2019 Mass Games tours, please click here.

Pyongyang Language Study Tour With Mass Games (1499 Euros / 2499 Euros) – Our most comprehensive DPRK tour. Spend a month with us in Pyongyang learning Korean and experience the Mass Games.

Moscow To Pyongyang by Train Tour With Mass Games (1695 Euros / 2495 Euros) – A tour for true Pioneers take the world’s longest train Journey all the way from Moscow to Pyongyang. Along the way we will also explore Rason, the special economic zone of North Korea, with the Mass Games as an epic finale.

Victory Day and Mount Paektu Tour With Mass Games (1345 Euros) – Come with us on our chartered flight as we head to the DPRK’s most sacred mountain: Mount Paektu. We will also be taking part in Victory Day Celebrations in Pyongyang and attending The Mass Games. 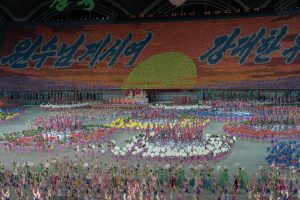 Pyongyang Summer Mini Break Tour With Mass Games (795 Euros) – Spend 3 nights in Pyongyang with this budget package that takes in all the highlights of the city, the DMZ and of course the Mass Games

Liberation Day and Summer Tour (945 Euros / 1145 Euros / 1445 Euros) – One of our favorite tours of the year – you’ll have the chance to visit both costs of the DPRK during the height of summer. We will also be celebrating the end of Japanese Occupation in Korea with the locals. 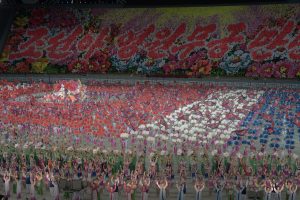 August Ultra Budget and DMZ Tour with Mass Games (475 Euros / 595 Euro) Our cheapest package taking you to Pyongyang, The DMZ and the Mass Games.

For a full range of dates, Detailed itineraries and list of tours including the Mass Games, click here.

If none of our dates work for you we can also tailor-make your dream North Korea itinerary for as little as 738 Euros for a two-night stay. Please contact us for more information on Independent Mass Games Tours.

For a first-hand perspective of what you can expect check out this video of YPT’s Matt at the performance last year and this breathtaking photo gallery.

Demand will be incredibly high for Mass Games tours this year so please contact us by clicking here to secure your spot on tour and avoid disappointment.

We look forward to seeing you for the 2019 Mass Games!