If you’ve spent any time following Young Pioneer Tours, you’re probably aware that we are nothing if not passionate ferroequinologists (pretentious-speak for ‘train enthusiasts’). To our mind, there’s nothing more fun that travelling on the North Korean railway, and we like to see ourselves as pioneers of the rails.

If you’ve spent any time following Young Pioneer Tours, or better still have visited North Korea with us you will realize that we do love a North Korean train! In our mind there is nothing more fun than traveling by train through the DPRK and we like to see as ourselves as Pioneers of this mode of transport!

Who runs the North Korean Railway?

The very socialistically-named Korean State Railway Corporation is the government monolith that takes care of train travel in North Korea. They superseded the Choseon Railway company, which was established during Japanese colonial rule. It is colloquially called ‘State Rail’ (국철, Kukch’ŏl).

State Rail has a veritable cornucopia of train types – electric, diesel and even old-school steam locomotives roam the rails of the DPRK, making some truly classic train journeys available.

How many countries is the North Korean railway connected to? 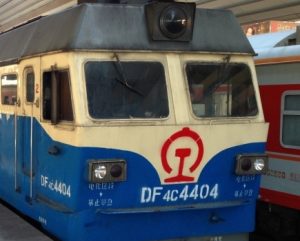 North Korea borders three countries: China, Russia and South Korea. There are six connections to China, one to Russia, and the seldom-used connection to the South.

China, North Korea and South Korea use the same gauges; Russia uses different gauges to the other countries, but these can be switched if/when necessary for the DPRK connection.

How many railway lines are there in North Korea?

North Korea has an extremely well-connected train network. There are eleven lines that link the whole of the country together; a massive achievement when it was completed.

There are some fantastic train stations in North Korea. Some are more impressive than others, but they all have that Soviet chic that we at YPT love.

What about the presidential trains?

All of the leaders of North Korea have had personal presidential trains, two of which can be seen preserved at the Kumsusan Palace of the Sun. These trains can and do travel internationally, as last seen when Kim Jong Un met Donald Trump in Hanoi.

The future of the North Korean railway

North Korea’s rail infrastructure undoubtedly needs further work, which should (hopefully) occur if sanctions are ever eased/erased. There have also been ongoing talks about a Trans-Korean railway linking Russia, North Korea and South Korea, but this is, at present, something of a pipe dream.

If you want to experience life on the North Korean rails, as well as the only tour in the world where Westerners cross the Russia-DPRK land border, join us on the Moscow to Pyongyang by train tour – the world’s longest train journey!