To say that the Pyongyang skyline has changed quite a lot over the last ten years would be quite the understatement. Previously there were much fewer cars, frequent blackouts, and not actually much in the way of a skyline. Nowadays the city is booming and has an actual skyline, and a large part of that is down to Ryomyong Street.

Ryomyong Street, which was completed on April 13th 2017 (just in time for the Day of the Sun), is one of the most luxurious and prestigious places that a Pyongyanger can live.

The street consists of 24 buildings of various uses and sizes (shops etc.), as well as the tallest residential in North Korea, with 82 floors and ideally no power cuts (Pyongyang also boasts the world’s tallest unoccupied building in the foreboding shape of the unoccupied Ryugyong Hotel.

The other buildings, ranked by number of floors and height, are as follows:

The street took just under one year to build, and was opened to great fanfare: both domestic and foreign media attended. 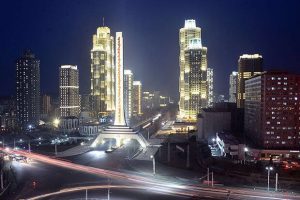 Amazingly – and something that the North Koreans should rightly be very proud of – is how eco-friendly the development is. The power requirements of the street lighting and many homes are satisfied in part, if not wholly, by the solar panels installed in the area.

As always, however, quality doesn’t come for free. It’s estimated that North Korea spent over $200 million creating the street (though it is notoriously hard to estimate costs in a socialist economy).

And who, exactly, lives in the Ryomyong Condominiums? North Korea being a socialist country, they can’t simply be bought! Each according to their need and all that.

Check out Ryomyong Street on one of our North Korea tours!