In late 1935 the Communist Party of China, led by Mao Zedong, arrived in Yan’an, a remote northern city in Shaanxi province, at the end of the mammoth Long March from southeast China.

They were to make Yan’an their base for the next 12 years and hone their political ideas in practice, which would be used as a model for the whole country after victory in the civil war in 1949. The current president of China, Xi Jinping, was ‘sent down’ to the village of Liangjiahe outside of Yan’an city as a youth during the Cultural Revolution, and Yan’an symbolism has featured highly in Xi’s ideas for reforming the CCP and China today.

Yan’an symbolises the Communist Party philosophy of ‘plain living and hard struggle’ as well as maintaining the purity of party cadres. It was here where the first ‘Rectification Movement’ was initiated, aiming to purge the party of those straying from Mao’s socialist road and reinvigorate its ideological sense.

In Yan’an the Communist Party first put into practice their ideas of agricultural cooperatives – in Nanniwan, in particular – as well as fighting guerrilla warfare against their Guomindang opponents in the valleys of the ‘Yellow Earth Plateau’, as this area is known. Mao also formulated his philosophy of New Democracy in Yan’an, and if you’ve ever wondered what the stars on the Chinese flag represent that will give you the answer. 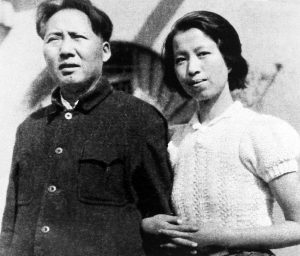 They also formed their ideas of political work amongst the masses and the idea that culture should serve the revolutionary – not reactionary – classes. In Mao’s talks at the Yan’an (Yenan) Forum of Literature and Arts these talks were put down, and it even President Xi refers to these talks regularly today.

With increasing talk of Xi Jinping’s China as ‘Maoist’ the city is, of course, centre stage. But Yan’an today is more of a thriving city built on the profits of the coal reserves which have been exploited there since the 1980s.

If you wander the streets you may see the local delicacies of goat’s feet being sold in bowls of spicy broth, stalls of dates from northwest China and the ubiquitous ‘yangyu chacha’: bowls of steamed potato with a tomato and chilli sauce. Potato became the staple diet after its introduction in the 1970s and is eaten more widely than rice or noodles even, making it the perfect city to visit for an Englishman.

Politics is almost a thing of the past though; on May 1st you’re now more likely to see a parade selling mobile phone contracts than one of international solidarity. But with myriad political historical sites to see, Yan’an is firmly at the heart of China’s ‘red tourism’ craze.

Visit Red Yan’an with YPT on our revolutionary red base tour every autumn.

.
< PREVIOUS
What’s the cheapest way to get from North Korea to Singapore?
NEXT >
Made in DPRK – Samjiyon Tablet