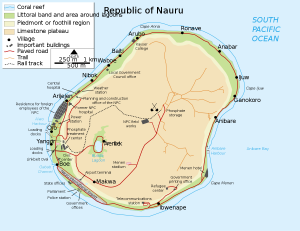 Once considered the wealthiest country on Earth in 1980, Nauru’s story takes a darker turn in recent news. As of 2017, it is now listed as one of the top 5 poorest countries in the world by BusinessTech. The history of this tiny Pacific island is both interesting and bizarre.

Nauru is a small island in the Pacific Ocean about 1,800 miles of Australia. It is the world’s smallest republic, and least visited country in the world. Originally occupied by people from Micronesia and Polynesia, it has been colonised by several countries since the 19th Century. First claimed by Germany, it was then administered by Australia, New Zealand and the United Kingdom. During World War II it was occupied by Japanese troops. Nauru then gained its independence status in 1968.

The country quickly moved from rags to riches with the help of its rich phosphate resources, thanks to the large population of seagulls using the island as a nesting spot. Companies use such phosphates to produce fertilizers, amongst other things.

The countries economy boomed, and residents were quick to use their newfound affluence to buy cars and large houses, and the government built up the island with impressive buildings and hotels. They even founded its own airline to import Western food.

However, all good things come to an end. Shortly after the boom in the 80s, the 90s took a turn for the worst in Nauru. Due to over-mining, the phosphate resources became depleted and the country fell into debt. By the early 2000s, most of these resources had almost entirely disappeared.

To counteract this, the government in Nauru took a very unique approach.

The government decided, with the advice of their top financial advisor, to invest in an innovative piece of musical theatre. This move would later cost the country over $7 million. The show loosely based on the life of Leonardo da Vinci didn’t make global headlines as hoped, and instead sparked this review from The Independent:

“Art historians in the audience may have felt queasy midway through Act One when Leonardo da Vinci slapped the Mona Lisa on the bum, and asked her to ‘help me with my research.’”

This is when Nauru’s history takes a darker turn.

At the end of the 90s and start of the 2000s, the number of refugees coming to Australia increased dramatically. To ease this influx, Australia set up a number of off-shore centres to both deal with and deter future asylum seekers. One such centre was set up in Nauru. Both Australian and Nauran governments attempt to keep media about such centres on the low, due to apparent poor conditions and treatment of refugees. In order to get a visa as a journalist for the country today, you need to pay over $8000. Photographs are not allowed inside the centres themselves, nor are smartphones with a camera feature.

The centre in Nauru closed down in 2007 due to overcrowding and lack of drinking water, sparking the Australian government to redevelop the camps. They then reopened in 2012. According to reports, improvements in conditions in the camps has been minimal.

Due to years of mining for phosphates, 70% of Nauru is now uninhabitable and employment rates boomed to a massive 90%. Detention camps remain open.

There is only one plane that accesses the island, and flights are less than daily.

So, what is there to do on this tropical island, and why should you visit? Read on here.

Find out more about the world’s top 10 least visited countries here, and more information on how to visit them.

Be one of the 160 visitors this year and take a trip to the world’s least visited country with YPT.