Young Pioneer Tours – What is a Pioneer?

Over the years there has been a lot of talk – and, we daresay, even controversy – over the name ‘Young Pioneer Tours’, why we chose it, and what its meaning is. Here we are, then, to give you the full lowdown on the Young Pioneers movement that inspired our name.

The Vladimir Lenin All-Union Pioneer Organization – shortened to ‘the Young Pioneers’, or ‘Young Pioneer Movement’ – was a mass youth organization of the Soviet Union that existed from 1922-1991, for children aged between 9-15 years old, and can be considered analogous to the Boy Scouts movement in western countries.

History of the Young Pioneers 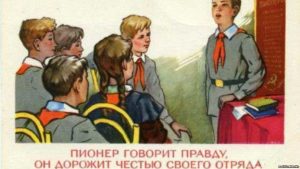 Contrary to popular belief, when Lord Baden-Powell founded the Scouts it was a much more militaristic movement, and was aimed at training young boys to grow up and be soldiers. It was only after the carnage of World War I that the Scouts morphed much more into what it is today. Thus, during the Russian Civil War, Scouts and Scout Masters found themselves on different sides of the conflict.

Following the civil war and reorganization of the Soviet Union, Komsomol (the All-Union Leninist Young Communist League) and the Red Army were instrumental in transforming the Scout movement into the Pioneer Movement, with them even keeping/changing the motto of “be prepared” to “always prepared”. By 1923 the Young Pioneers already had over 75,000 members.

Being a Young Pioneer 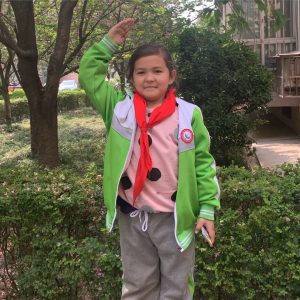 Young Pioneers shared a great deal in common with their Scouting cousins with the emphasis being on learning skills and stuff like camping, but with the added socialist element of training people to be good citizens and leading them towards eventual party membership.

Uniform of the Young Pioneers

The iconic uniform was actually part of their regular school uniform but with a red neckerchief.  The organizational and rank badges were worn on white shirts. Boys wore pants and girls skirts, with optional side caps as headdress.

Whilst Boy Scouts (as I can attest in England) swore allegiance to “God and the Queen”, things with the Young Pioneers would obviously be a little different. Before joining the Young Pioneers, members would have to promise the following:

I, (last name, first name), joining the ranks of the Vladimir Ilyich Lenin All-Union Pioneer Organization, in the presence of my comrades, solemnly promise: to passionately love and cherish my Motherland, to live as the great Lenin bade us to, as the Communist Party teaches us to, as require the laws of the Pioneers of the Soviet Union.

Not a lot of ambiguity there!

The Motto of the original Soviet group consisted of an obviously Scout-inspired question and response, consisting of the following:

Summons – Pioneer, to fight for the cause of the Communist Party of the Soviet Union, be prepared!

Pioneer Movements Around the world 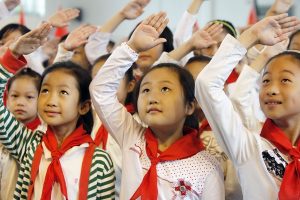 As Soviet Communism spread across Europe and the world it became pretty much policy for Pioneer Movements to be set up in these communist countries (and, indeed, non-communist ones). Many of these groups took their own regionalized names, with many still existing today.

The ones in still-socialist countries such as China, Laos, Vietnam, and of course North Korea, remain extremely visible and active. In China (as I can very much attest) it is still a huge honor to be made a Pioneer. The Jose Marti Pioneer Organization is also still extremely active, and has even won awards for its contribution to society from the UN.

An interesting side note is the Pioneers of the Workers Party of Belgium, who are the most famous of the non-communist country movements.

Controversy with the Young Pioneers 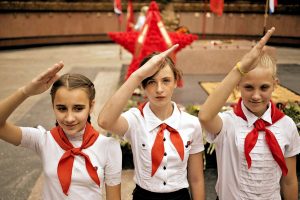 Socialism and communism obviously bring up different feelings for different people – and obviously a fair bit of controversy – and the Young Pioneer Movement is no different. In fact, it cannot help but recall that other infamous state-sponsored youth organisation founded in 1930s Germany. But like most things there were (and are) a lot of positive elements about the Young Pioneers, and positive memories persist for many former members.

Why call yourselves Young Pioneer Tours?

For this I need to talk about my personal inspiration for naming the company! Initially we started with tours to North Korea, and I wanted a name that was at least linked to North Korea, but more importantly was separate enough to mean that we could expand into other destinations. I simply didn’t want a name that tied us completely and irrevocably to North Korea.

Secondly I wanted a name that represents what we are. ‘Young’ doesn’t necessarily mean ‘youthful’ but can also connote being young at heart. The ‘Pioneer’ portion of the name represents who we are: adventurers looking to get off the beaten track and explore the world.

.
< PREVIOUS
Made in DPRK – Arirang Smartphone
NEXT >
How to Get a Visa for South Sudan