We began in busy Beijing Central Train Station, grabbing our last KFC and Starbucks before the 6-day journey (no shame) and promise of not-quite Michelin starred meals would begin. Before we even made it to the K3 Trans-Mongolian waiting room in Beijing we’d made our first train buddy, an excitable gent from Hong Kong. He’d be accompanying us until day 3 in Irkutsk. From this point, we quickly found our train gang, which just kept getting bigger day by day.

The gates opened and the train began boarding.

We were situated in carriage no. 15 – the one at the very end. This ended up being both a cruse and a blessing. It made the initial walk to our new moving home rather strenuous since the train/micro-city itself is indeed rather long. However, it meant that we have a lovely little window right at the back where you can look out onto the railway. Also, it meant that people weren’t constantly walking through your carriage.

After the good 5 minute treck down the train to the dining cart and a quick Chinese-style meal and drink, we passed the first few hours enjoying the rural Chinese countryside, counting the numerous hollow cities (cities in which the only high-rise apartment buildings and offices are shells without even glass panes in the windows) and superficial construction sites with no one working on them. And an incredibly creepy, fully functioning fare ground.

The further West we travelled, the more layers we put on. Our once hot and stuffy cabin soon became warm and cosy, until further into the night when it remained cosy, but the warmth gradually started to slip away.

It was then time for dinner, after which we ended up heading down to carriage 15 to party in our cosy new home with our new 6day- buddies to await the Mongolian border crossing. 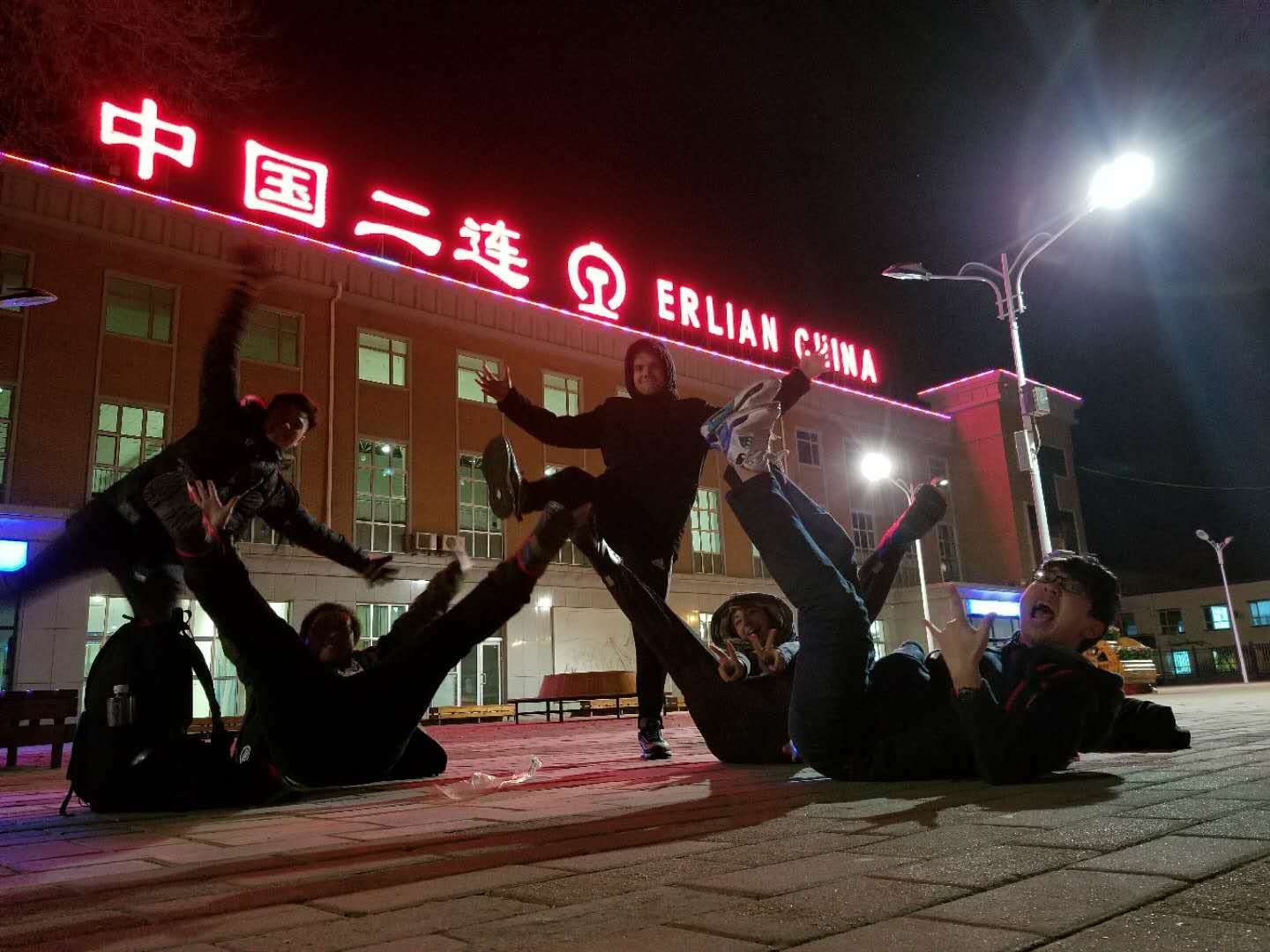 Frustratingly enough, the border crossing takes place over a good few hours, over late night until early morning. The train arrived at Erlian station late in the evening, and after immigration had taken away our passports to check, we were allowed to get off.

What we didn’t realise, is that once you’re off, there’s no getting back on. For a couple of hours.

Much to our joy, we wandered off the carriage to Chariots of Fire blasting out of the train station speakers.

Much to our joy, we wandered off the carriage to Chariots of Fire blasting out of the train station speakers. This was then followed by other anthems including Simon and Garfunkel, and other atmospheric instrumental tunes. This made walking around this desolate station quite pleasant, despite the fact that there was nothing around. After the mandatory Instagram photo shoot, we decided we were a bit chilly – not yet used to being below zero. We turned around to head back to the carriage, which, we had been informed, would leave 2 hours later.

Much to our dismay, our carriage had disappeared.

In fact, 70% of the entire train had disappeared.

Losing one carriage is difficult enough, but the Trans-Siberian is pretty long. And we were in the middle of no-where, so losing 70% of it is quite a difficult task.

We weren’t worried though. Despite the eerie instrumental music and extreme lack of other people around creating a somewhat daunting and doomed atmosphere, I was pretty confident that my (admittedly minimal) Chinese skills hadn’t let me down and that we would indeed not be forever stuck in this small border town. Sure enough, the train slowly but surely started to piece itself back together. Unfortunately, we had to wait a while until carriage 15 got put back in its place and we could get back into the warmth! 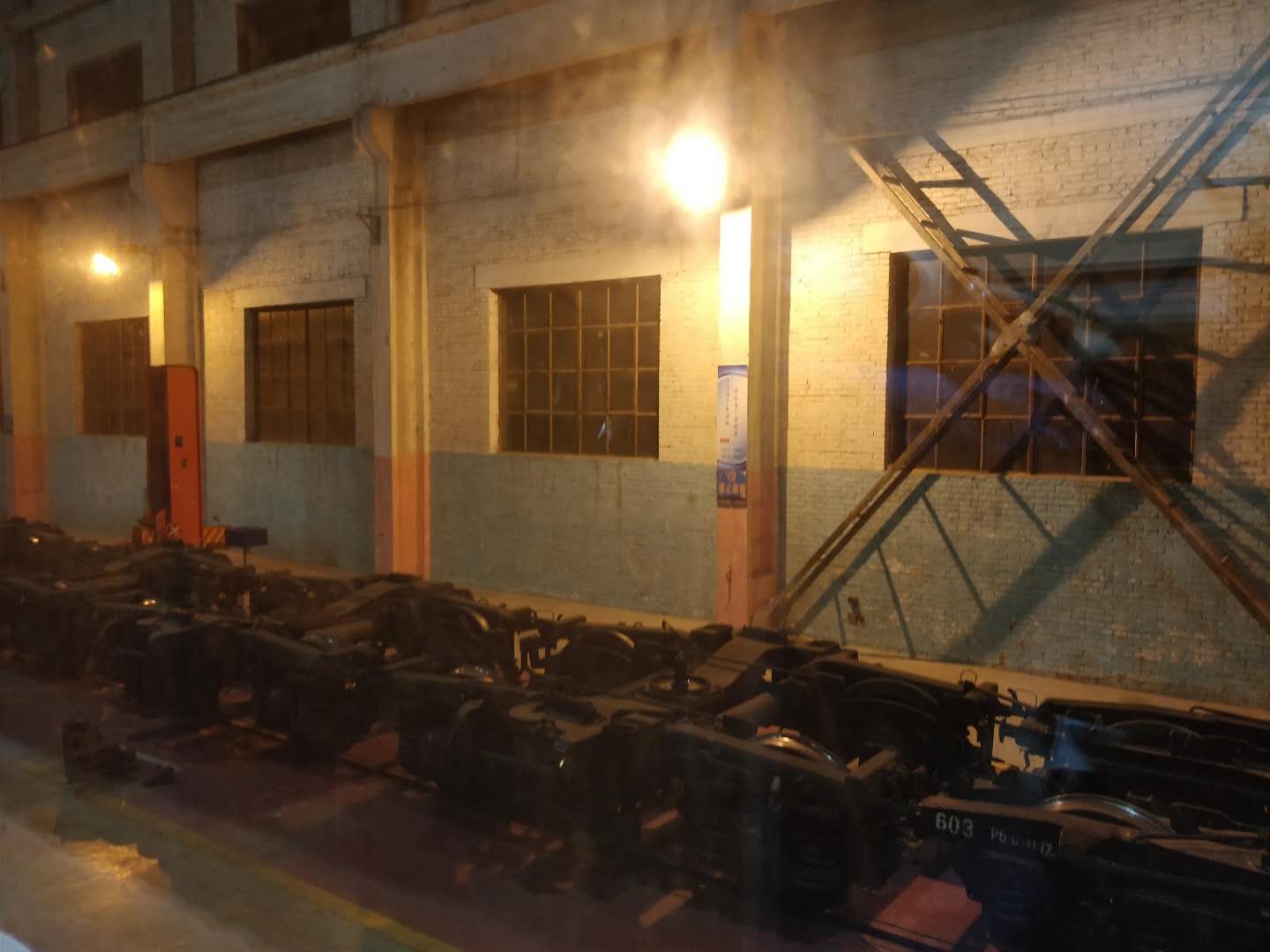 The following few hours were pretty eventful as we headed into a shed and the train was completely dismantled, with everyone still on board. This was particularly exciting since each carriage was lined up to the front and back of you, so you had some new buddies across the street from you in a weird neighbourhood kind of feel. You were then placed on some kind of equipment to lift up each carriage, the wheels were changed, and you were attached together again.

Because this all took place between 10-2am, after the excitement was over, we were very much ready for bed, and to begin day 2!

Waking up in a frosted desert 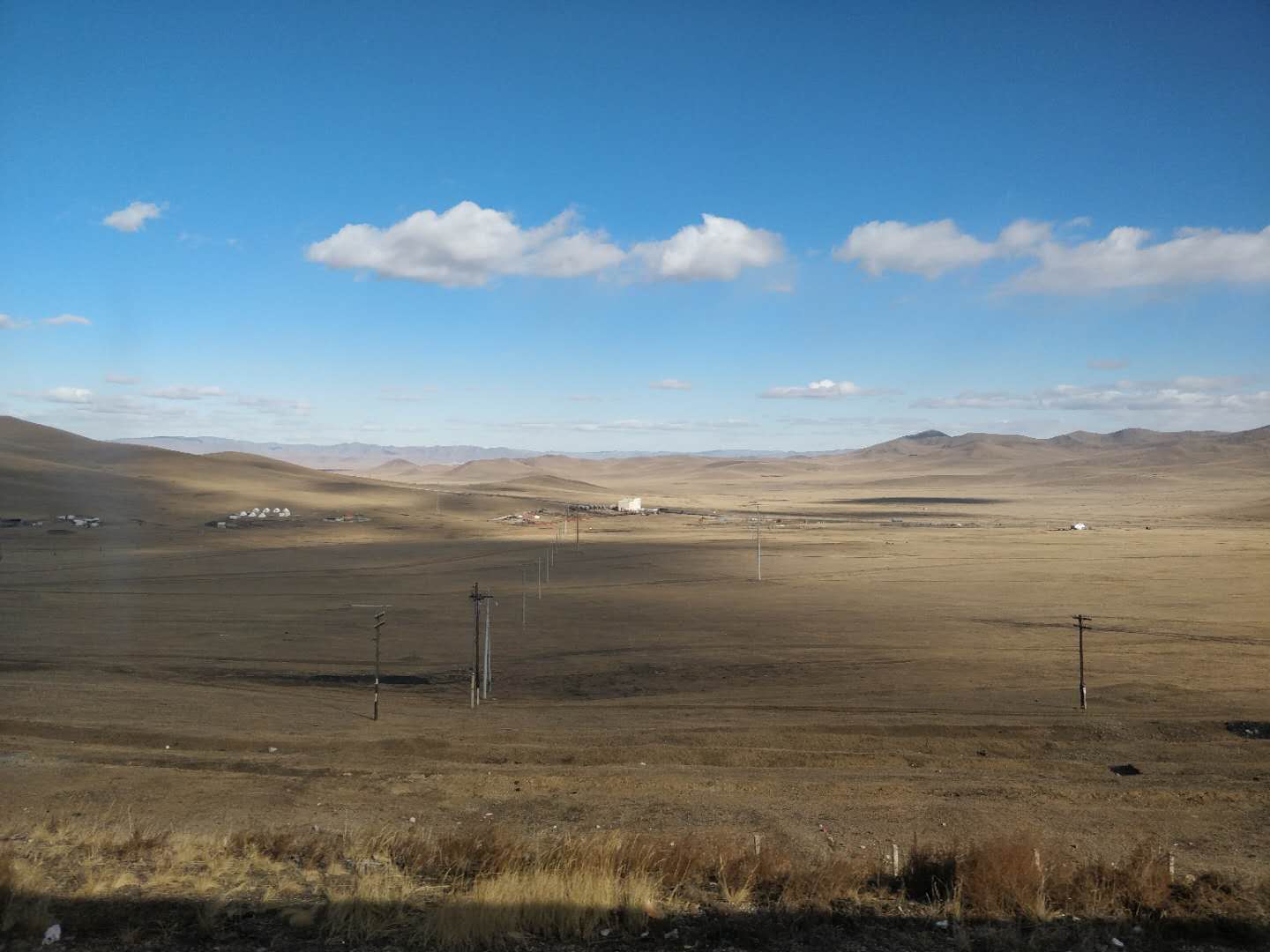 Day two saw a relatively late wake-up in the Gobi desert positively freezing. Experiencing both golden brown and snow-covered sands was certainly something not everyone can say they’ve done!

After watching the outside world and relatively samey scenes of the odd horse and yurt, we headed down for breakfast and received a pleasant surprise. During all the train dismantling fun yesterday, it seems that some of the carriages had changed too. Now as we entered for breakfast, we were in an entirely different and exciting environment. The Mongolian dining cart has an incredible exterior, decorated with extravagant finely carved symbols and patterns.

Not only the interior, but the menu and the staff changed too. My mandarin restaurant vocab knowledge wouldn’t help me here, and English was no good either. Luckily, the menu has pictures so ordering in hand gestures is not a problem, and the menu is definitely something to sample. Meals will set you back anything between around $10-20, but it’s pretty decent and nutritious stuff – everything from egg-based dishes to meat and fish based meals. All full of vegetables too!

Despite the language barrier, the staff are super friendly and will help teach you a bit of Mongolian if you like!

Around 2pm we stopped for our longest stop of the journey so far. We had 1 hour to explore Ulan-Bator where we got ourselves some Mongolian currency and went in desperate search of any alcohol. Never wanting to look at a bottle of Baijiu again, we were in desperate need of some vodka or whiskey. 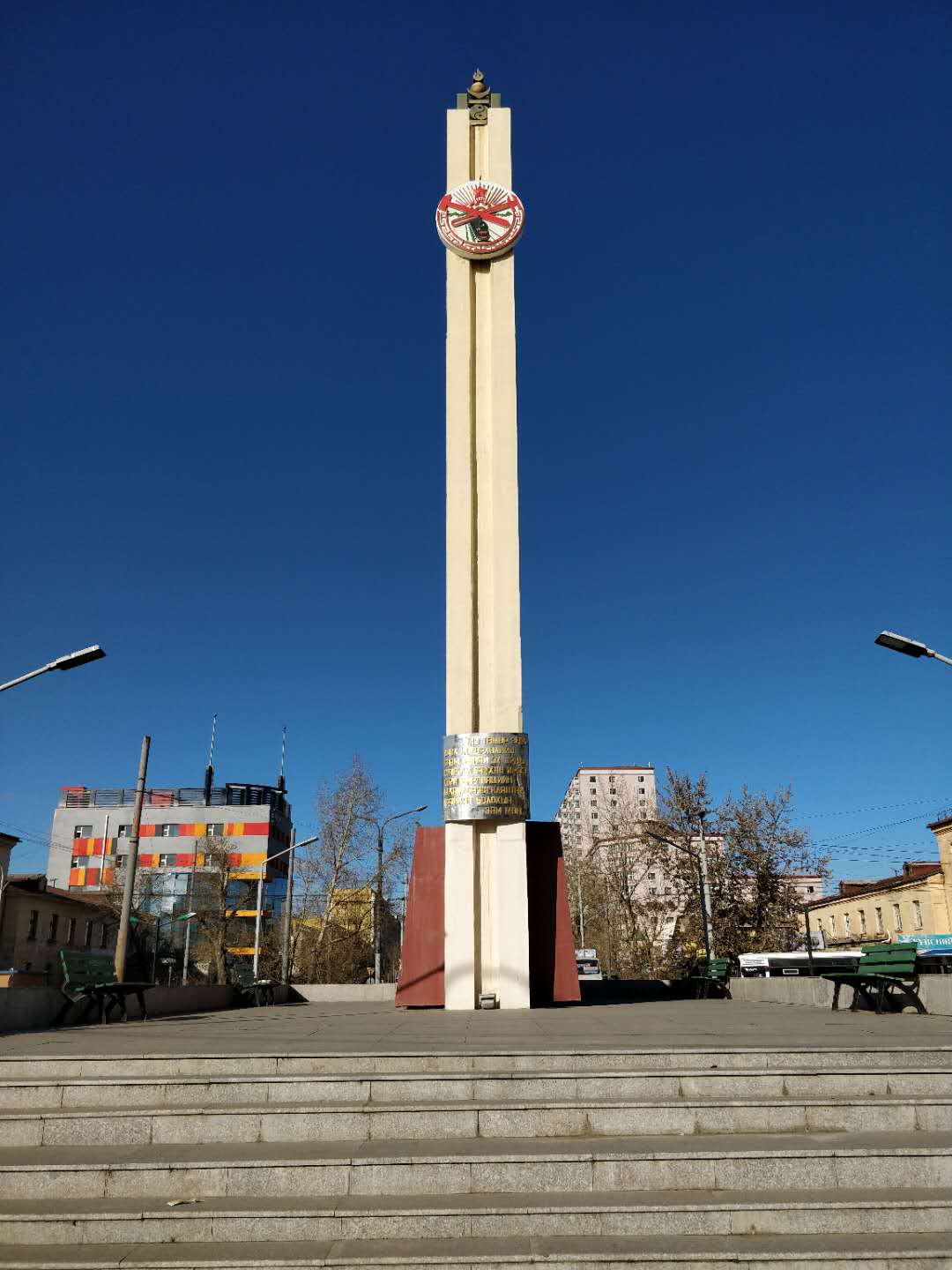 Alas, we didn’t find any. But, we did manage to have a very brief walk around, stretch our legs, and check out some cool sights and markets, before reentering our metal cage.

Excitement over, we headed for a few hours of chill time before hitting up the dining cart (and baijiu) once again, this time with a few more Mongolian friends – as well as some more British and Irish, and the original excitable Hong Kongese crowd.

All too soon it was time for the Russian border control, which was probably the most intense experience so far. Not filling in our forms completely, we were off to a bad start with the stern, incredibly Russian immigration officer. Our cabin was then searched three times, by three different people. This also included a root through our luggage. The fourth inspection also involved army officials coming round with sniffer dogs, which is enough to make anyone at least a little on edge.

We also once again lamented the fact that we had forgotten to do a toilet run 30 minutes before the stop (they close the doors 30 mins prior to arrival at the next station) and were therefore desperate to get going, for many reasons!

We headed off finally in the early hours of the morning – except, it suddenly wasn’t that time. Crossing over into Russia meant -6hrs to what we’d been used to, technically. But, the Transsiberian micro-city keeps its timezone throughout the journey – no idea how this will impact on any jetlag, but I guess we’ll see..!

From deserts to frozen lakes 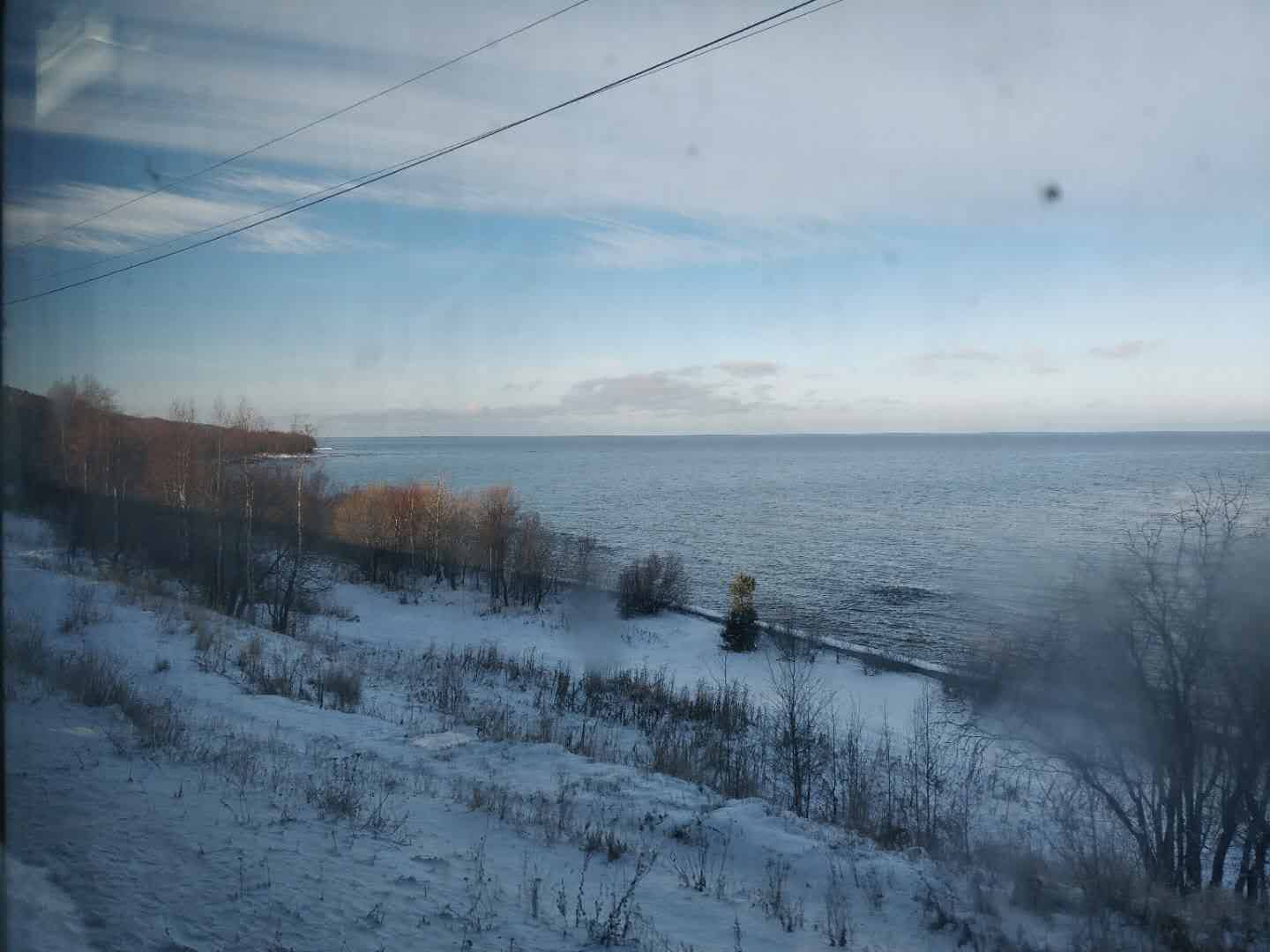 Waking up was incredibly exciting, as the landscape had changed overnight from orange sands to snow-covered mountains and the incredible Lake Baikal. Excited, I jumped out of bed and headed to the back of the train where we’d been able to get some fantastic pictures from the back window. I pulled open the door and, to my horror, there was another door.

You may be stuck in the same carriage for 6 days, but it is by no means the same train.

You may be stuck in the same carriage for 6 days, but it is by no means the same train, and the changes will always keep you on your toes.

This train never fails to surprise me.

Our Chinese train attendants looked at me and seemed more astonished at my astonishment. ‘Chi fan?’ he asked me. Am I going to eat? But the restaurant carriage is a 5-minute walk down the other way, right…?

I pulled open the door to find the new restaurant cart, Russian style. Yet another dining cart to check out! 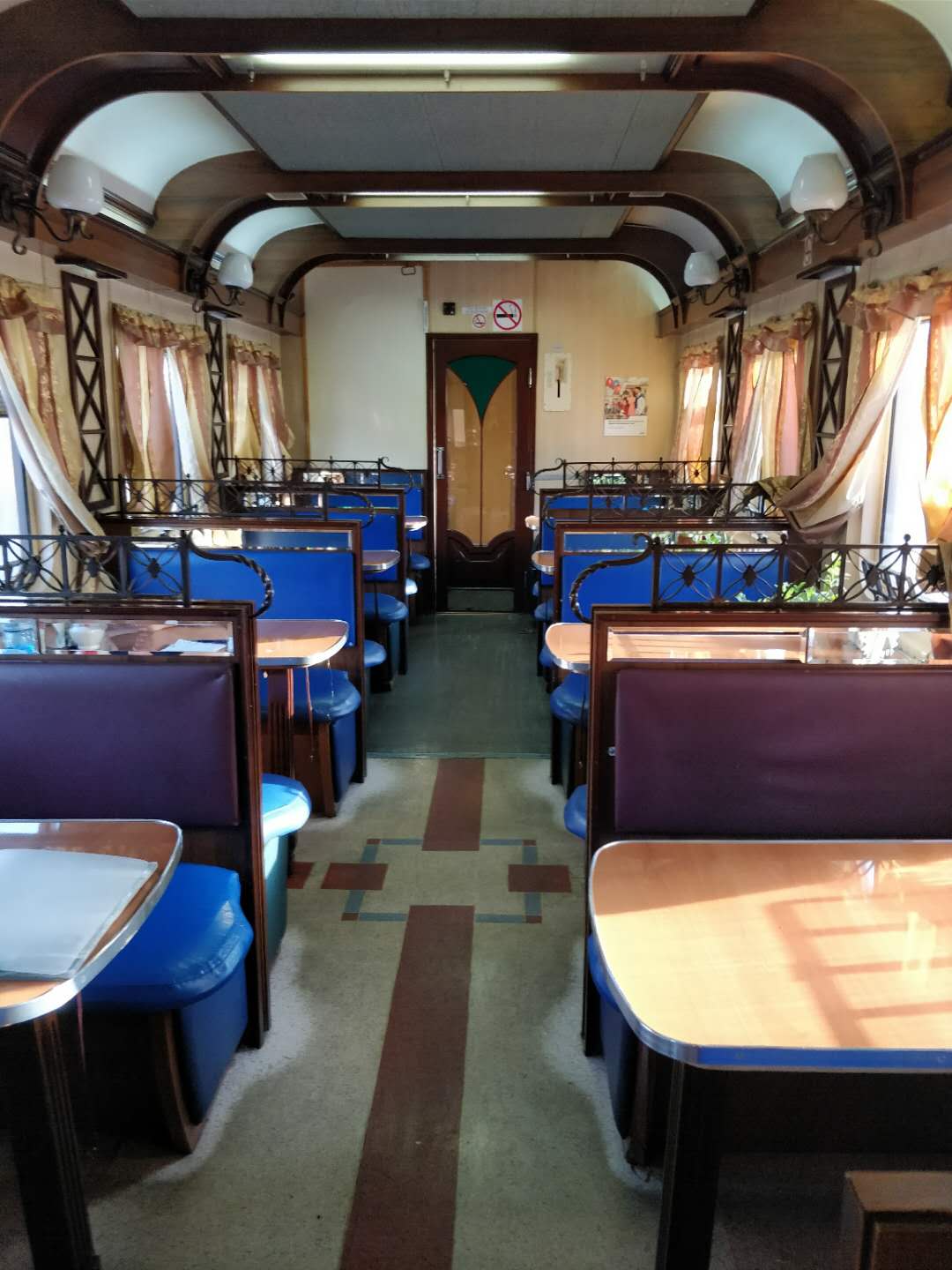 Travelling from the Chinese side of the train to the Russian side was like crossing borders each time.

Now we were actually in Russia the heating on the train was in full blast, meaning a pleasant, if not a tad too warm atmosphere on the train. We cruised for a few hours along Lake Baikal, and stopped off for 20 minutes and checked out the massive train-yard of a station, before settling back into our now cosy cabin.

Next stop, Irkutsk, where we’d be meeting the rest of the group, who would be staying on the Russian side of the train. After a few brief hugs and introductions, the Irkutsk group were eager to get on board. We, however, were eager to stay out as much as possible. We headed out of the platform and out into Irkutsk, where we witnessed our first Russian-style fight. This involved two extremely large Russian-looking lads in a grapple at the top of the stairs to the station. This was made all the more fabulous as they were hit repeatedly by an old woman with a handbag until they stopped. Hello Russia. 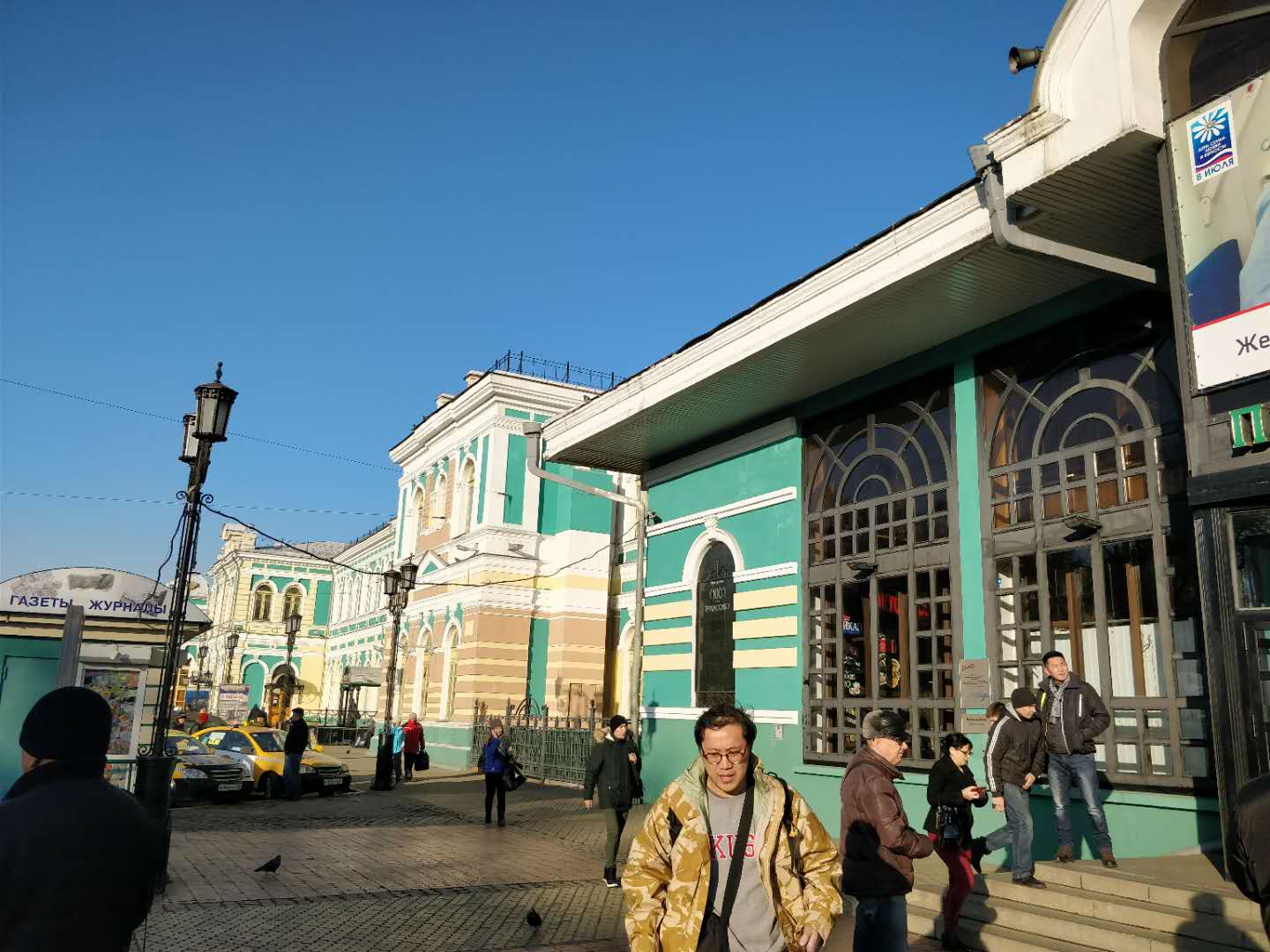 We stocked up on supplies in Irkutsk, including a few litres of vodka, and we were ready to go again.

Thanks to those few litres of vodka, the rest of the afternoon remains a bit hazy. It involved vodka shots and pickles, dried meats, cheese, and bread. So, a pretty Russian start for the journey with the new group.

We’ve been lucky enough so far to have our own cabin to ourselves, so our room then became the party room, much to our cabin attendants dismay.

Half-way through our vodka escapade, we were startled as a knock on the door was followed by three official looking people. 2 Russian officers and our friendly train attendant. We’d heard it wasn’t exactly encouraged to drink on the train…. And there was no hiding those litre bottles now…

They held stern faces and asked for our passports. We all held our breath.

They checked our passports, smiled, and left – tactically not seeing what we were up to…

The party can go on!

Click here for the final 3 days of the journey.

Want to join in on this epic Trans-Mongolian Adventure next year?

Paris has inherited the nickname “Gulliver” for her adventurous pursuits and enduring passion for anthropology. Her desire to find the perfect quote for every occasion has turned her into an avid reader, however, she will only read non-fiction with the obvious exception being Harry Potter.