Transnistria is one of the most obscure countries on the planet and didn’t earn the nickname ‘Europe’s North Korea’ for nothing. This secretive state still holds a sinister air of the unknown, with strong, often false stereotypes being thrown around many travelling circles which would have been valid ten years ago but not today. Modern Transnistria has come a long way since its early post-war years. The Young Pioneer Tours team has been running tours and research trips into the rebel republic for almost ten years and has seen its transformation firsthand and learned many lessons about life in the country. YPT’s number one even lived there!

Why was Transnistria created?

Transnistria under the Soviet Union was a part of the Moldovan Soviet Socialist Republic, formerly Bessarabia. During the collapse of the USSR, Moldova declared its independence and aimed to ‘Romanianize’ the country putting the Romanian language and culture first and Russian second. The largely Russian population on the east side of the Dniester river (which cuts right down the middle of Moldova) began to feel under threat and separatist sentiment grew. The primary reason for this was because of Romanian collaborators who attacked them alongside Nazi forces during World War II. Luckily for the Transnistrians, the remnants of the Russian army and all of their weapon stockpiles were also on the east side of the river. What ensued was a short but bloody civil war which killed over 1,000 people and displaced many more. Transnistria declared independence and Moldova withdrew west of the river. Russian peacekeepers maintain checkpoints at former battleground border crossings to this day. During the post-war years, young Transnistria struggled with organized crime factions warring with each other until the Sheriff strolled into town, which leads us to the next question…

What is the Sheriff Corporation?

Sheriff was formed by a former Transnistrian police chief during the 1990s. It went head to head with criminal factions involved in smuggling and organized crime and either liquidated or locked them up for decades. But afterwards, they simply took over their operations and pocketed the cash. Today, Sheriff has a monopoly on the entire country, owning a gigantic supermarket chain, gas stations, housing complexes, luxury hotels, a football club called Sheriff FC and a multi-million-dollar football stadium. However, the country’s impressive infrastructure and cleanliness can also be attributed to them.

Is it safe in Transnistria?

In short, yes. When YPT first began visiting Transnistria it was no joke: harassment from KGB and organized crime, military curfews and lots of bribes abounded. Thankfully, that is all in the past. Today the country is very safe with organized criminals now wearing suits and running supermarkets, and the streets are safe to walk 24 hours a day. Of course, common sense and being a decent person applies: Do not photograph military bases or personnel, disrespect the locals or their views, or litter. Keep an open mind and your trip will be worry-free.

When is the best time to visit Transnistria?

Transnistria remains a fascinating place all year round, but to visit when the action really is we recommend either Victory Day celebrations or National Day Celebrations on 2nd September. We run popular tours for both of these events, which both feature huge Soviet military parades and celebrations way into the night.

Season-wise, summer is a great time to visit Transnistria for long nights, BBQs and drinks outside in the warm evenings. Whilst winter lacks these bonuses, it also provides a grey, Soviet-style backdrop to all your photos and definitely lends a more sinister (but not too sinister) vibe to proceedings.

Are there any embassies in Transnistria?

Technically yes, but they’re not very useful to most of us. There are only two embassies in the country, that of two other breakaway states: Abkhazia and South Ossetia. Putin has not recognized Transnistria but they still adore him anyway. There is also a Russian consulate where Transnistrian citizens can apply for a Russian passport, as a Transnistria passport is pretty useless. It’s one of the few places in the world where you can see the flags of all global breakaway states flying side by side: Nagorno-Karabakh, South Ossetia, Abkhazia and Transnistria at centre stage. The flag of the world’s youngest breakaway state, the Donetsk People’s Republic of Eastern Ukraine, hasn’t been raised yet, likely over fear of severe repercussions from bordering Ukraine.

What currency is used in Transnistria?

The currency used is different from Moldovan currency and is called the Transnistrian ruble. It is literally the definition of monopoly money and the coins are plastic. It is completely useless anywhere else in the world but it is the only acceptable currency inside the republic. The exchange rate is roughly 20 Rubles to 1 Euro.

What languages are spoken in Transnistria?

What are the attractions in Transnistria?

The main draw of Transnistria is the fact that it’s an open-air museum of the Soviet Union: giant Lenin statues (some bullet riddled), MiG fighter jets and WW2 monuments dot the landscape and for many people, their way of life is still Soviet-style. All of this makes the republic a photographer’s paradise and a dream destination for adventurous travellers who like to explore the weird and bizarre.

Does the KGB still exist in Transnistria? 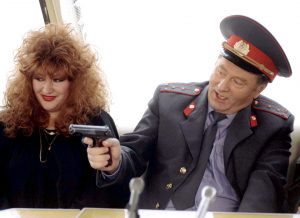 You’re just a few years too late. They were officially called the KGB up until changing their name to the MGB, but the secret police vibe, uniforms and hammer and sickles definitely still remain.

Will I have to pay a bribe?

Thankfully, no. Bribes for foreigners are a thing of the past in Transnistria and whilst locals definitely grease palms to make their lives easier in many ways, foreign tourists are largely left alone under orders from the top. Sheriff are making enough money in their own way and they would rather avoid international attention placed on the small number of tourists the republic receives being hassled or robbed.

Can I use an ATM in Transnistria?

We don’t recommend it. Whilst there is one ATM in the capital that dispenses Russian rubles for an awful rate which you then have to exchange for Transnistrian rubles, the best option (and most economical) is to bring in euros or dollars and exchange on arrival.

Now with all your questions answered, join us and explore Transnistria for yourself on one of our many action-packed Soviet tours to the region!

.
< PREVIOUS
Is weed legal in North Korea?
NEXT >
Angola: 6 reasons to visit