Soviet Batman: what if Batman had been a Soviet citizen?

Batman is someone who needs precious little introduction – he’s a Randian billionaire genius playboy who inexplicably spends billions on brutalising mentally ill people instead of funding social welfare programmes – and there are probably Tibetan ascetics living in caves who’ve heard his origin story.

If you wanted to do a political take on Batman, you could say he’s the ultimate vindication of capitalism – an ultra-rich, ultra-capable Übermensch who single-handedly confronts social ills and leaves the world a better place than he found it. A bit like an Ayn Rand hero who punches people.

But what if Batman hadn’t been born an American? What if he’d been born in the USSR? Luckily, there’s already been a take on what a Soviet Batman might have looked like.

The 2003 Elseworlds (A DC Comics offshoot posing “what if…?” scenarios) series Superman: Red Son posed the question: what if Superman had landed in the Soviet Union instead of the USA?

Without getting into that too much, a corollary of Superman being in the USSR is, naturally, Batman being in the USSR. This Batman, who remains nameless, is an anarchist revolutionary whose parents were gunned down by Stalin’s goons and whose life mission is to avenge their deaths.

How is Soviet Batman different?

First off: obviously his costume is way more ‘Russian’. The famous cowl has been modified into an ushanka (the Russian fur hat with earflaps) and he wears bulkier, more ‘military’ clothing. 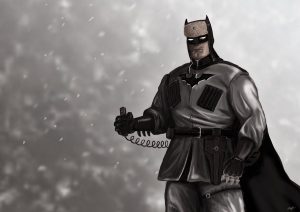 Secondly, his outlook is obviously entirely different. He opposes the Soviet Union – anarchy is not really compatible with one of the most authoritarian regimes that ever existed – and isn’t averse to killing a commie pig if it achieves his goals. Soviet Batman is basically a lot more overtly political than his American counterpart.

What happens to Soviet Batman?

If you wanna read Superman: Red Son for yourself, it might be a good idea to skip this part.

Superman ends up becoming the ruler of the USSR, which puts him directly at odds with Soviet Batman’s stated goals. This leads to Batman kidnapping Wonder Woman (also Soviet, and in love with Superman) to lead Superman into a trap involving kryptonite the simulated light of Krypton’s red sun. Alas, Soviet Batman fails to trap Superman and ends up blowing himself up to evade capture.

Is it a good take on ‘Soviet Batman’?

Superman: Red Son is pretty universally critically acclaimed and remains the darling of the Elseworlds imprint. That said, this Batman is anarchist rather than communist, and a more ‘Soviet’ take might have involved him actually being committed to the principles of communism. After all, Bruce Wayne is a pretty committed capitalist; why wouldn’t his Soviet counterpart be more fully committed to socialism?

Can I see Soviet Batman for myself?

Since he’s fictional: no, you cannot. But you can get a good look at the former USSR on our Summer Soviet combo!