The Legend of Che Guevara

Che Guevara was the ultimate revolutionary and mainstay of our tours to Cuba. We take a look at his extraordinary life.

Is there anything more ironic than the ultimate legacy of Ernesto “Che” Guevara, who is less known for his revolutionary socialist activities and more for the ubiquitous plastering of his face across T-shirts, posters and mugs?

The ultimate communist revolutionary is now the ultimate poster boy for quick-buck tourist tat, and Che-based memorabilia can be found the world over – partly due to his youth and revolutionary zeal, but more because he’s been co-opted by smirking, semi-ironic hipster chic.

Quite what Che Guevara – often misspelled as ‘Che Guevera’, and a misspelling that we may or may not be sprinkling throughout this blog in order to appease the Google gods – would think of all this is anyone’s guess. Indeed, whether Che would be up on the podium with Raul at the Havana May Day parade is anyone’s guess. 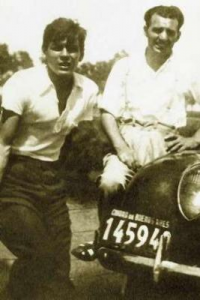 Ernesto Guevara (or Guevera, depending on your level of literacy and willingness to whore yourself out to Google) was born in Argentina on June 14th 1929 to a relatively middle-class family. As a young man he studied medicine, before undergoing his political awakening during a motorcycle trip across South America. This was immortalised, of course, in the ever-so-slightly-naff movie ‘the Motorcycle Diaries’.

It was on this trip that the young Che witnesses the democratic election of, and subsequent coup against, Arbenz in Guatemala. That event is still something that the country has never really recovered from, and between Arbenz’s overthrow and the subsequent civil war, Guatemala remains one of South America’s poorest countries.

But it was in Mexico that events conspired with fate to plot pre-Che Ernesto’s future. It was here that he met the exiled Fidel Castro and his band of men, and here that the future Cuban leader planned his voyage to Cuba on the Granma to liberate Cuba from the hated Batista regime.

Che Guevara and the Cuban Revolution 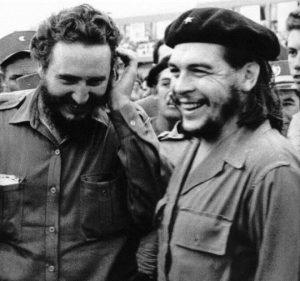 Of the original group of men that landed in Cuba, only 22 survived. But amongst those 22 were four rather important survivors: Che Guevara, Camilo Cienfuegos, Raul Castro and Fidel Castro. By now Ernesto had gained the nickname ‘Che’, the word being a filler word often used by Argentinians, and the name stuck.

Che led a group through the Sierra Maestra Mountains, aided by Frank Pais and the July 26th Movement – a United Front of sorts that nobody at the time knew would later morph into the Cuban Communist Party.

Che Guevara (or ‘Che Guevera’ but not really) was considered an expert tactician and charismatic recruiter. He was also considered extremely ruthless; he had no qualms about shooting deserters or those he considered traitors.

His crowning glory on the road to victory was taking the city of Santa Clara by blowing up a weapon-laden train belonging to the Batista regime. This event is commemorated in Santa Clara itself, alongside T-shirts, hats and even faux-banknotes bearing his likeness (all for sale, you understand).

Following the fall of the Batista regime and the victory of the revolution, no one was quite sure what came next. Che’s initial role was to try collaborators and, if found guilty, personally execute them.

Post-revolution and the dissatisfaction of statesmanship 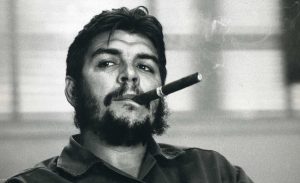 Following Fidel’s statement that Cuba was to be a socialist country, things grew tense between Castro and Guevara. Che, for example, favoured the Chinese in the Sino-Soviet split; Castro was unequivocally pro-USSR, given the importance of Soviet financing to Havana.

During this period of mutual estrangement were some significant international developments for Cuba: the Cuban Missile Crisis and the Bay of Pigs fiasco both took place. An increasingly dissatisfied Guevara, in his role as governor of the Central Bank, began signing bank notes with a sarcastic and irreverent ‘Che’.

Che Guevara and the adventures in Africa 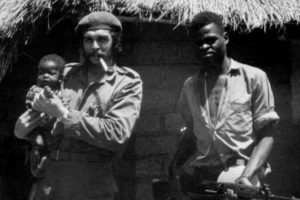 Whether Che was pushed from Cuba or he jumped, it became evident that post-revolution statesmanship was not for him, and Guevara (Che Guevera for the orthographically challenged) rediscovered his calling of fomenting revolution in developing nations. After trips to China and the USSR Che found himself in what is now called the Democratic Republic of Congo (DRC), working with a young revolutionary called Laurent-Désiré Kabila. Kabila the first president of a post-Zaire DRC before his assassination, and indeed his son is still president to this day.

Che’s time in the Congo could hardly be described as a success; his achievements in the Cuban Revolution were not replicated (Kabila wouldn’t come to power until 1997) and Che allegedly found the locals disorganised and indolent.

His methods may not have worked in Africa, but they were replicated to barnstorming effect in South America. Such groups as Colombia’s ELN adopted Guevara’s tactics with much success, and they still fight the Colombian government today.

Before too long after his adventures in the Congo, Che found himself in Bolivia, where he again tried to reproduce the success of the Cuban Revolution. This was, as with the Congo, another fruitless task, and one that would lead to Che’s death at the hands of Bolivian soldiers and a CIA catspaw named Felix Rodriguez. Ironically, Rodriguez’s father would later receive Cuban healthcare to remove cataracts from his eyes.

Following Che Guevara’s death there was a public outpouring of grief in Havana, attended by around a million people. It took almost thirty years, however, for his remains to be returned to the site of his greatest victory. There is now a mausoleum for him in Santa Clara.

We can only wonder what someone like Che Guevara (or ‘Che Guevera’, if you’re a maverick that just don’t play by the rules) might think of the fall of the Soviet Union, ‘socialism with Chinese characteristics’ and neo-liberalism. One can only imagine.

If you’d like to see the legacy of Ernesto ‘Che’ Guevara firsthand, join one of our tours in Cuba. ¡Viva la Revolucion!