How do Chinese names work?

My Chinese friends include guys called Construction, United Army and Born in Beijing. Chinese names are confusing and difficult to pronounce, until you can speak the language anyway. But how exactly do they work?

This practice is followed throughout East Asia including Korea and Japan. Korean names follow the system of Chinese names. Kim Il Sung was, as you should be well aware of, from the Kim family and his given name, of two characters, means Risen Sun. Indeed, if you’ve been to Korea you’ll do well to spend any amount of time there without meeting a Mr or Mrs Kim, and likewise in China you can’t move for those surnamed Wang, Li, Chen or Zhang.

What do Chinese names mean? 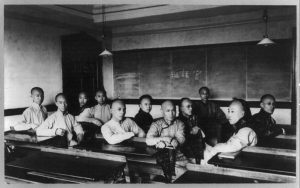 Chinese (as well as Korean, Japanese and Vietnamese) given names generally all have a meaning behind them and often follow national trends. In the 1950s after the People’s Republic of China was founded people named their babies things like Guangqiang (strong country) and Jianguo (established country) as well as Minzhu (democracy). Many were even named Yuanchao, meaning Aid Korea, the official name for China’s participation in the Korean War.

In the 1960s Weihong (Protect Red), Weidong (Protect Mao ZeDong) and Wenge (Cultural Revolution) became popular, and after the reforms of the early 1980s names like Jianshe (Construction) showed the shift from revolution to economic development in Chinese society.

Chinese girl’s names often refer to beauty and elegance, but there are also many women with the character Nan (meaning boy) in the name, reflecting the parent’s wish for their potentially only child to be “like a boy”, not uncommon in still strongly patriarchal China.

Chinese parents often don’t even choose their child’s name, they simply go to a kind of “fortune teller” versed in Chinese geomancy who looks at the date and time of birth, works out which “element” they are lacking or in danger of, and the name will then make up for that defect or combat that risk. If the teller concludes they are at risk of fire, their name will include at least one character with the water element in it.

Do Chinese women change their surname when they get married?

So why are all my Chinese friends called Lily and Frank?

Basically, because their Chinese names are too difficult for you to pronounce, so Chinese people often take a Chinese name when they are younger which they choose for themselves or is given to them by their teachers. Some pick a name similar in sound or meaning to their Chinese name, some pick one in ways we can never begin to fathom. If you teach in China, you’ll quite probably have met a Rainbow, Oreo, Robin Hood, Bunny, Apple, Sherlock, Dinosaur or Octopus.

And lastly, as well as an actual name and an English name all Chinese people will also have a family nickname, referred to as a xiaoming (small name), which is what relatives will call them often up until their adult life. Some are cute sounding, Mengmeng or Tingting for example, some refer to the future wishes of the parents, like Laidi (come little brother, i.e. please give us a son next), some are unexplainable, like Maonu (hairy/furry girl), Xiaoyu (Little Fish) and Ergou (Second Dog).

In conclusion, learn your Chinese friend’s actual names as well as their English names, and if you get on really well you can even refer to them by their nickname, and of course you can choose a Chinese name yourself, then you can amuse your hosts as much as they amuse you!

.
< PREVIOUS
Jobs at YPT
NEXT >
What is the capital of North Korea