North Korea might be famous for its lack of internet, but for those of us old enough to remember there was actually a pre-internet time when people went out and, well, socialized.

We do not have it on every itinerary that we offer, but we do try and include it on at least some itineraries, as a visit to the Golden Lane Bowling alley offers great opportunity to hang out with locals and see how Pyongyangites spend their free time. 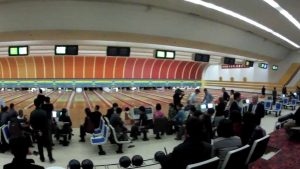 There’s also a few interesting nuances to Golden Lane that we like – or perhaps they’re just of interest to the DPRK geek, such as the slot machines in Golden Lane.

As a famously socialist country, gambling’s illegal in North Korea. But at Golden lane they have slot machines; not unlike the one-armed bandits you see in other countries, but rather than cash they pay out in “tokens” that can be redeemed for prizes. Not technically gambling, but hey: a game of chance is what it is, right?

To summarise, we do not include the Golden Lane Bowling Alley in every tour that we offer in North Korea, but it is certainly available for anyone that wishes to travel on an independent tour to North Korea.

And if nothing else – and certainly our reputation does precede us –surely no one can question our unique status as the one company that certainly knows Pyongyang nightlife like the back of our hands.

Get in touch if you want to add the Golden Lane Bowling Alley to your itinerary, or better still if you need an off-the-record visit to the North Korean nightlife scene!

.
< PREVIOUS
What is the Belarus Exclusion Zone?
NEXT >
Pakistan unveils visa-on-arrival policy for 5 countries, e-visas for 175 more