We have written before about what a Young Pioneer is; indeed, as might be obvious, indeed our company name was indeed inspired by the Young Pioneer movement. Now whilst the Cold War might have ended (or is it back?), the International Pioneer Movement still prevails in certain quarters. In places such as North Korea, international solidarity amongst Pioneer students is still very much a big deal.

Believe it or not, there are Young Pioneer camps in Wonsan that still draws the crowds for international socialist students wishing to see the DPRK. The Songdowan International Children’s Camp (Pioneer Camp), situated in Wonsan, is a huge camp built primarily for the Young Pioneers of North Korea, but is a place where Pioneer students of various socialist organisations are sent to hang out in the summer. 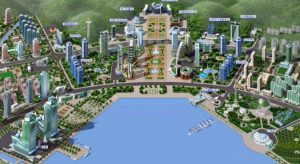 Most of the countries that send Pioneer students to the camp are from African countries that were – or, to some degree, still are – socialist. Lots of old Eastern Bloc countries also still have strong Pioneer movements, and frequently send their lil’ socialists to North Korea for the locals to show them how it’s done.

The Songdowan Camp itself is a very impressive affair; it boasts enough rooms to accommodate thousands of Young Pioneers, as well as various leisure activities suitable for the Pioneer students of the many different nations that visit North Korea.

Wonsan is, indeed, one of our favourite places to visit when in North Korea. We often include visits to Songdowan one of the Young Pioneer Camps. We would say that most guests see it as one of the highlights of visiting Wonsan – though the sannakji (live octopus and squid – not for the fainthearted) restaurant and Wonsan Lighthouse do take a bit of beating, in fairness.

Check out our classic tours if you would like to visit Wonsan and feel like a true socialist Pioneer!

.
< PREVIOUS
Blloku Tirana – “The Block”
NEXT >
US-Iran tensions: what do they mean for your tour?