Having left the relative cool of the Kopet Dag mountain range where we’d spend the previous night with a local family in a village, we drove along the one road heading from Ashgabat to the west of Turkmenistan.

Gradually it got hotter and drier as we ventured deeper into the desert and camels started making regular appearances. Every now and then a child or two, or perhaps an old lady or man, would be standing at the side of the road, whether it be to get a lift, to sell something, or simply to have a look at the minimal amounts of passing traffic. 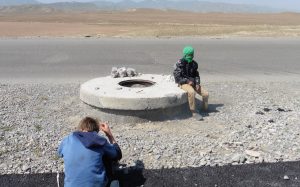 As we hurtled along the bumpy tarmac, we started noticing that several of these people were nursing plastic bags full of something that looked like big, dirty potatoes. Intrigued, we stopped next to two young boys (probably between five and ten years old), to find out what they were selling, and discovered to our surprise and delight that they weren’t big, dirty potatoes, but instead big, dirty truffles. So we each chipped in and bought a shopping bag full of truffles, for a grand total of 5 Manat (roughly $1). Why not? 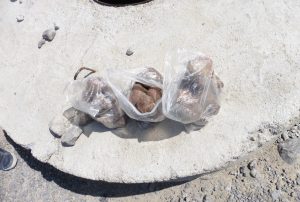 What were we going to do with these things? Surprisingly not a single one of us had any experience doing anything with truffles, let alone somehow preparing them from scratch. Our local guide had also never cooked with them before, but was sure that they’d act just like potatoes, so we should cook them just like potatoes. But where and how were we going to cook them at all? Here we were driving through the desert towards Turkmenbashy, the town formerly known as Krasnovodsk, but renamed after the former President Turkmenbashy, where we’d be staying at the Turkmenbashy Hotel, named after the town named after the former President Turkmenbashy. Not exactly a bastion of tourism, the Turkmenbashy Hotel has all the trimmings – gym, sauna, bar, room service, etc, but none of them are actually ever open or ever work. There is wifi, but only one guy, Arslan, knows how to switch it on, so good luck getting access to it. So I didn’t have high hopes about being able to cook the truffles there.

After arriving and sorting out our rooms and bags for the evening, we made our way to the restaurant in the hotel. We don’t make a habit of eating in hotels, but there aren’t many options in Turkmenbashy (if any), and the retro, kitsch lobby, bar and restaurant, have all sort of become part of the Turkmenbashy experience. My favourite part of this particular hotel is the crockery, cutlery, glassware, salt and pepper shakers, napkin holders, tooth-pick holders, and all other things on the tables, which are decorated with the Ministry of Railways emblem. Nobody can offer a reasonable explanation for this, but they’re really cool none-the-less.

Unsure about the reaction we’d get, I asked Arslan (the same guy as who knows how to switch on the wifi), whether it would be possible to get the kitchen to cook our truffles for us, and offering of course to pay for their service if they would humour our unusual request. Well, we couldn’t have gotten any better a reaction. After a quick meeting in the kitchen he came back and asked us, “Do you want to just go into the kitchen and cook them yourselves?”. Needless to say the reaction from our group was unanimous. We quickly abandoned the various drinks and snacks we had on our table and sprinted into the kitchen where we met Farnas, the plump matriarchal “head chef” of Persian descent, Lydia, her giggling young Russian assistant, and Saule, a gentle and soft-spoken Turkmen woman. 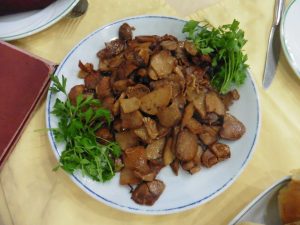 They agreed that slicing the truffles and frying them, just like you might with potatoes, was a good idea, so we set ourselves up in a production line to make it happen. Farnas wasn’t shy about how pathetic she found our truffle-peeling skills though, and soon the production line was just her, Lydia, Saule and one of our group. The rest of us stood around in their kitchen, laughing and joking and taking photos of each other. Once the potatoes were peeled Farnas took charge of the frying – a job that seemed far too difficult and dangerous for our motley crew, so in the meantime, Saule showed off some of the other products from their kitchen – some manty (Central Asia’s version of a large dumpling), pelmeni (a smaller dumpling), and a tray of somsas (pastries filled usually with cheese or meat).

When the precious truffles were finally finished frying, the ladies lined up for a group photo with us, and we were sent away with our truffles, along with many smiles, hugs and good wishes.

Join us in Central Asia for a celebration you won’t forget.