When I first came up with the idea of traveling to Iran I was told, by one twenty-four-year-old man in my German class with rather limited worldly experience, “Good luck as a woman! You want a good, safe country to visit to get the Middle Eastern experience – try the United Arab Emirates.” Having now been to both and experienced both, I would say not only do they offer vastly different experiences and perspectives of Islamic and Middle Eastern culture, but that the general Western perception of both countries, and how safe they’re perceived to be for women, are vastly different from reality.

I travelled to the Middle East in November 2016, and spent most of my time there in Iran. Much has been made of the safety of Iran in general, due to the nuclear weapons tension in the area and resulting sanctions imposed, as well as the safety of Iran for women, which was at least in part due to the now-infamous 1980s book/movie Not Without My Daughter and the issues Betty Mahmoody raised. Everybody seemed to have something to say about my travel plans, from my LGBT friend who said she was incredibly worried for my physical wellbeing; my mom’s friend who worked in Riyadh and said she wouldn’t go near the place for love or money; or my ex US military supervisor who was convinced I was going to be carried off by some rich Arab (plot twist: Most Iranians are Persians, not Arabs).

Well… I went, and can only say the place was amazing. Our trip was two weeks full of ancient cities, beautiful palaces and botanical gardens, mosques with the most unique mosaics and some of the most hospitable people you could ever hope to meet in your life. They will welcome you into their homes and their country, man or woman, young or old.

There are a couple of things, as a woman, you do need to be aware of if you decide to come. To go out in public, you need to wear a long, black or navy gown with a hood called a chador, OR a headscarf with a manteau, which is any long, loose-fitting coat of any colour. Arms and legs generally need to be covered, but in Tehran, Shiraz and Tabriz, you can stretch this a little. Ignore this at your own risk, although if you’re obviously part of a guided tour and you’re at least making a little bit of an effort, you should either be left alone or loaned something. The religious police, in my experience, are a bit like traffic cops in the West. They’re annoying and sometimes arrogant, and you don’t know when they’re coming, but unless you’re rude or don’t listen to them, they shouldn’t bother you too much. 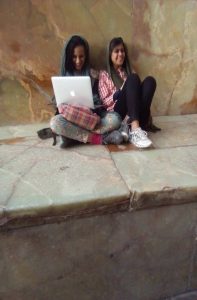 This can be really annoying. While it’s not really a problem on public transport as you just have to sit at the back of the bus, it does mean that if the hotel or town you’re staying in has a pool, hot tub, sauna or gym, it will be open for men and women on different days, and women usually only get a couple of days a week. If women are lucky enough to get their own facilities, they’re not usually as good as the men’s. If you decide to go to Kish Island, the supposedly liberal part of Iran, there’s one single beach where they have female lifeguards it’s fenced off to prevent any possible peeping toms, and women are allowed to wear bikinis. Women can waterski at the main beach too, but have to wear the full-on burkinis. Men, however, can swim at any other unfenced beach on the island they want.

I will shoot down another couple of myths about being in Iran as a woman. One is about driving. Women absolutely can drive in Iran if they have a local or international license, but… once you see the Tehran traffic, I’m not entirely sure why you’d want to, honestly. It sucks, and that’s putting it mildly. But, there are plenty of New-York-style yellow taxis that are cheap and completely safe to take. I’ve taken them alone, with a male driver, at night and sat in the front lots of times and never had any problems except one guy who overcharged me. If you’re really worried, however, Tehran and Qom have a female-only telephone taxi company that employ female drivers and only accept women or boys under 12 as passengers. The other myth is about dating. It’s definitely acceptable to date in Iran. I’ve done it. What isn’t acceptable, however, is massive PDA. 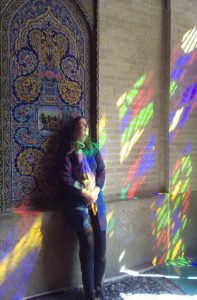 So there you have it. If you’re a woman, you definitely should go to Iran, and you’ll have an amazing, if not occasionally frustrating time. I’m hoping to go back sometime in the next year to see how it’s changed since I was last there.

Experience Iran yourself — check out our Middle East tour page!

.
< PREVIOUS
What do Vietnam and North Korea have in common?
NEXT >
Promoting the communication of deaf people between North and South Korea