YPT is proud to announce the first ever Korean language course tour available to tourists in North Hamgyong Province. This tour is designed for both those looking to gain an absolute basic introduction to Korean and those already possessing Korean language proficiency and interested in learning more about the specifics of the North Korean dialect. To make this tour even more exciting, we’ll be getting out of Pyongyang and heading to the rural north east of the DPRK, way off the usual tourist trail and a part of the country with a distinctive North Korean dialect. Spaced over four classes, primarily located at the School of Foreign Languages in Chongjin, the third largest city in the DPRK. We’ve designed this itinerary to provide you with as many local interactions as possible to practice your language in a real world environment for one of our most unique tours and insights into North Korean culture and it’s people.

Our journey first starts in Beijing where we’ll board our overnight sleeper train to Tumen, a border town of China that lays directly across the Tumen River from the DPRK, only a stones throw away. Once arriving we’ll have time to explore this curious border town and spend the evening at local hotel.

The following morning we’ll go through Chinese immigration and become one of the very few western tourists to walk across a bridge into North Korea. Here we’ll be met by our friendly local Korean guides and head directly to Wangjaesan Grand Monument, one of the most impressive in the country and a must see for any fan of grand socialist monuments.

We’ll then make our way to Hoeryong city, a beautiful city famous in the DPRK for “pretty girls, apricots and the hometown of Kim Jong Suk (Kim Jong Il’s Mother).”
Next on our agenda will be the infamous industrial city and third largest’s city in the DPRK: Chongjin. We’ll head to the Foreign Language School where our first intensive, introductory Korean language lesson will take place. After class we will head to Kim Ki Song Middle School to join a class of Korean students to practice our new Korean phrases and teach some new English skills too. We’ll be able to visit a local kindergarten where the workers of the Kim Chaek steelworks factory send their children to study and explore the recently renovated central square and the revolutionary museum that holds history on the battle for liberation against the Japanese during WWII. Following our second class we’ll head to lunch at the Chongjin Seamen’s Club for more mingling with locals in the front bar and a friendly game of billiards.

Our next destination is Mt Chilbo, famous for it’s incredible nature of both land and sea. Here we’ll indulge in the only home-stay available in the country and Korean class in the homestay village with a local teacher. This is a one of a kind experience which will lead us to spending our day and night eating, drinking, playing sports and exchanging photos with our Korean home-stay family. After dinner we’ll head to the beach for some roasting of marshmallows and campfire chats. We’ll also take advantage of the mountains here and go for gentle hikes along the peak for spectacular views. After saying goodbye to our Korean families we’ll make our way to Rason.

Rason is located in the far North East of North Korea, borders Russia and China and is the Special Economic Zone of North Korea. Definitely the less visited area of the DPRK and perhaps its status as an SEZ tends to make people question how representative of the DPRK it is. Whatever the reason may be, it’s become a true hidden gem of the DPRK. With very few visitors and a relaxed atmosphere, Rason is one of our favourite places to go. The only place in North Korea where you can visit a market as a tourist as well the only place where you can exchange hard currency for DPRKorean Won at the bank (and at real rates too!). What’s more you can actually spend it in local shops and the market! You can also get a DPRK debit card, chat with students at the Foreign Language School, visit factories, drink at local watering holes and more! By this stage we’ll be communicating at these sites with our newly acquired Korean language skills for a truly local experience. This is the perfect trip for returners, or for people who want to see the DPRK and experience a truly local experience. Pyongyang Study Tour: Studying in North Korea for a Month 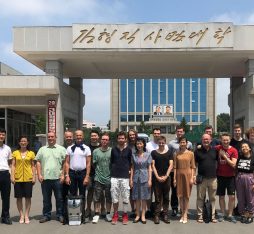 • 4 x 2 hour Korean language classes at Chongjin Foreign Language School
• Twin share accommodation (single supplements are available for an extra 40 EUR per night).
• Railway transport (Beijing to Tumen and Pyongyang to Beijing).
• All meals in the DPRK unless specified in the itinerary.
• Korean and Western guides.
• Air-conditioned bus and driver.
• All entrances (unless otherwise stated).