A new budget way to travel between Beijing and Shanghai

For a long time, the choices to go from the Chinese metropolis of Shanghai to the capital, Beijing, were either flying or taking the train. As trains are often much cheaper than flights, the choice truly came down to taking a slow train or take the high-speed train. There is now a new option which might just offer the best of both worlds.

The new overnight electric train (动车) that links the two cities offers a new level of comfort on routes which were usually served by the slow train. The new overnight trains are slightly faster than the slow trains but much slower than the high-speed train. However, speed is not everything and you might want to consider the overnight electric train as a way to save a night of accommodation as the train leave in the evening and arrives in the morning. You might be 12 hours on the train, but it is 12 hours spent sleeping rather than 4 to 6 hours of your day you could use for other things.

The sleeping classes: not much change 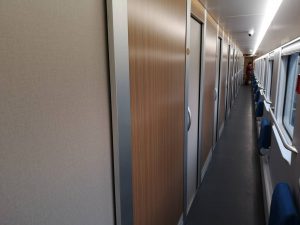 If you have been on a slow train in China before, you will be pretty familiar with what the sleeper carriages look like on this new train. What is called ‘second class’ is very similar to what was called ‘hard sleeper’ in the trains of the old days, which is to say that they’re 6-berth open compartments. What is called ‘first class’ is similar to what was called ‘soft sleepers’ – 4-berth closed compartments with slightly more luxurious mattresses and bedding.

The true difference: the seating class

The main difference between this train and the old trains is the seaters. The seaters do not look anything like the rock-hard wooden benches of the old days but have copied the style of the high-speed-train second-class seaters. The seats are comparable to economy-class seats on an airplane in a 3X3 configuration. Some of the seats have a big table in between them, allowing for families to sit together. The seats recline a bit; about 40 degrees back. It truly makes seaters an interesting option for travellers on a tight budget but two things have to be kept in mind. First, they do not turn the lights off at night, so bringing an eye-mask is pretty essential. Secondly, contrary to a flight, there are a quite a few stops and passengers embarking and disembarking, so your neighbours will switch quite often. If you are sitting in the aisle or in the middle, you might have to stand up and make way quite often. If you can choose and have a strong bladder, try to get a window seat. 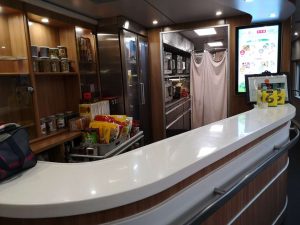 As for the other facilities such as the washroom and the canteen, you will find that their design is very similar to the one found on the high-speed trains. The toilet are spacious and in much better condition than their high-speed counterparts.

The smoker used to indulging their habit between carriages will be disappointed though, as this new model of train is completely non-smoking and much more aimed toward cleanliness than the trains of the older days.

The biggest addition, however, is surely the free WiFi service available on the train. In order to benefit from this service, you will need to download an app which can be gained by scanning a QR code spread out throughout the train. At the moment, the app is only available in Chinese but is quite similar to the one used in the different subway systems of China (Huasheng Wifi), which provides free wifi in Shenzhen and Beijing.

Once the app is installed and you have registered through your phone number and your train ticket, you will get high speed WiFi for the duration of your trip. The app also comes with an entertainment system that features many Chinese TV shows and movies, but also a few foreign movies in their original language. If the selection is not to your taste, you can still log on to your favourite streaming service and watch anything you want, which is truly, in our opinion, a game-changer!

For Chinese speakers, the app comes with a plethora of useful options. You can, for example, book a taxi or accommodation at your destination as well as track your progress along the line and get up-to-date info about delays and estimated arrival time.

It make sense for China Railways to roll out their new model of train on one of their busiest lines. We can expect the country to spread this new model of train to more and more lines and these slow overnight trains make sense; they allow travellers covering long distances to do it overnight and not waste the daytime hours. Frequent commuters will probably find a lot of use for these trains, and they make weekend trips between the capital and Shanghai easier than ever.

Some might, however, miss the special charisma of the somewhat grim old slow-train experience — even the dubious charms of a standing ticket.

If you need help booking train tickets in China, Russia or North Korea,  YPT can easily do it for you!