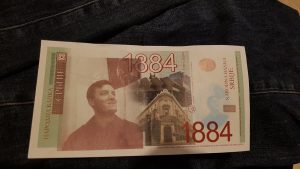 Working as an adventure travel tour guide for YPT to some of the world’s most bizarre destinations, it’s fair to say that I often find out some quirky things that can be done and also pick up some strange souvenirs on my travels. Recently, one of the strangest was printing out a stack of Serbian-currency banknotes with my face on it. After visiting the local flea market in Belgrade, Serbia on our recent Balkan Badlands tour, our local fixer asked if I had bought anything good so I showed him an original Yugoslavian banknote of 500 billion Yugoslavian dinars printed during the crippling economic crisis that hit the Republic of Yugoslavia during the early 1990s, arguably a precursor to the vicious Yugoslav Wars that came soon afterwards.

‘So you like interesting currency?’ he asked ‘I know a cool place to print out your own cash in Belgrade’, we headed through central Belgrade, the former capital of Yugoslavia, past the groups of old Balkan guys playing dominoes with a Turkish coffee in one hand and a cigarette in the other. Whilst I was expecting to be taken into a shady underground printing shop, instead we headed into the stunning building that is the National Bank building. The interior architecture, which is a mixture of Renaissance and Baroque architecture, is all intact after surviving the carnage of the first world war, the Second World War as well as the NATO bombing campaign on Belgrade during the 1990’s. In pride of place is a grand crest featuring the coat of arms of Yugoslavia.

Upstairs is a currency museum with great displays of old coins and money used through the history of Serbia and an interactive exhibit filled with gold bullion and gold bars on handles to see if you can lift it. In the corner of the museum is a functioning bank teller desk, I was instructed to sit down for a photo of me to go on the currency. Naturally striking a classic dictator pose, a few shots were snapped and I was asked to pick one. Within the space of about 5 minutes, I was walking out with a stack of my own personalized currency. The best part was it was free! The worst part was that nobody on the planet will accept a banknote with my face on it!

How you can get your own!

If you would like to print your own personalized banknotes, head to the second floor of the National Bank of Serbia (Nemanjina 17, Beograd 11000, Serbia) it’s open between 7:30am–4:30pm and closed on Saturdays and Sundays. Or you can join us on our Balkan Badlands tour, taking in the most fascinating and harrowing parts of the former Yugoslavia.