Magic Moments of Sagan-Zaba. You know, the more I live the more I get convinced that human personality (and even national mentality, to stretch it farther) is in great dependence of the natural environment. Say, Sagan-Zaba rock formation (located 5 km to the north-east from Cape Krestovsky on the territory of Pribaikalsky National Park) could serve as a nice example of Siberian character – in the distance it looks gloomy and unfriendly, even somewhat indignant, but when you get closer, it proves to be a hospitable chap, rolling out all its treasures in front of you.

Sagan-Zaba looks similar to other crystalline limestone formations in the area, yet it is special.

Firstly, its unusual colour – pinkish-white, which gets more pale or intensive in hue depending on the time of the day and the angle at which the Sun rays fall on it. Secondly, its world famous petroglyphs – over 60 carvings in the rock surface (covering the area of 40 square meters) dating back to the Bronze Age – Late Iron Age (2000 B.C. – 1000 A.C.), i.e. the oldest carving is about 4000 years old! The carvings depict human figures (horns on the heads are suggestive of their shaman origin), animals (deer, oxen, dogs), birds (geese, swans). Academician A.P.Okladnikov the founder of Siberian Archaeological school, a scientist of the Siberian Branch of Russian Academy of Sciences in Novosibirsk, the third biggest city by populationin Russia

and the biggest city in Siberia. He considered Sagan-Zaba petroglyphs to be a real pearl of East Siberian ancient culture and art. He wrote in one of his articles, “…Sagan-Zaba petroglyphs are the most complex by composition, manner of carving and variety of scenes from all known rock carvings on the territory from the Ural Mountains to the Pacific Ocean.” Sagan-Zaba is one of the biggest sacred shaman places in the area, in the 17-19th centuries local Buryat people performed their religious practices here, asking the spirit of the rock to protect them from the evil and grant his protection to their clan.

Thirdly, in the eastern part of the Bouroun Sagan-Zaba Bay (which is adjacent to Sagan-Zaba rock in the east) as a result of numerous archaeological expeditions, there was found a settlement of the Neolithic Age – Late Iron Age (5000 B.C. – 1000 A.C.), revealing remnants of ceramic utensils, knives, and axes.

The last but not the least important peculiar feature to be mentioned is a spectacular view of the Baikal from the top of Sagan-Zaba rock. It takes just 20 minutes to climb up, and hours to enjoy the wonderful presents the nature holds in store for those observant enough to notice them.

But this is what is on the surface. I invite you to have a look at the area from a different perspective. Shall we have a dive?

We usually go on dive safaris in September – and first part of October. At this time of the year the air is still quite hot, but early autumn heat is milder than that of the summer. Besides, the scenery is very picturesque: the golden birch-trees, red and orange aspens, light-green larches and dark-green pine trees – the mountains are as if covered with a beautifully designed patchwork blanket.

It takes some 9 hours to travel by ship from Listvyanka to Sagan-Zaba. We usually spend a day or two diving there. The lake floor close to the rock is quite flat and the waters are shallow (about 5-10 meters/16-33 feet), but unusual stones make it very interesting to dive. There can be distinguished at least three types of Sagan-Zaba area special stones:

Snow-white chunks of crystalline limestone polished by water, that look like ice. They are scattered over the lake floor and are of such sophisticated forms, that I keep wondering if it was nature’s scheme to make sort of an underwater sculpture museum. Why not call the exhibition “Lake Baikal – The Impressionist”?

Snow-white sand covers the floor of numerous caves and grottos at the foot of Sagan-Zaba. You see, crystalline limestone is quite a soft matter, so water easily shapes and grates it. Once we had a very unexpected experience there: the Baikal seal (called “nerpa” by locals) rushed out from one of the caves when we entered it. It was a surprise to see nerpa so far from its usual habitat – Ushkany Islands – in the north of the Baikal (5 hours of traveling by ship from Sagan-Zaba).

There are also stones that look like gold. Depending on the lighting, dull grey stones acquire noble golden colour. Some of us even tried to chop the stone to have it analyzed in a laboratory. Unfortunately, the matter proved to be too hard to be cracked, so we left it to be a mysterious peculiarity needing further investigation.

Must see sights when diving in Lake Baikal

Some parts of the lake floor are covered with hard matter that resembles magma that was boiling and then got cold. Because the lake is of tectonic origin, no wonder some of the magma might have come out to the surface from under the Earth crust during one of numerous Lake Baikal earthquakes (suffice it to say, on the average there are registered over 100 minor and more serious earthquakes in the Baikal area annually).

Some fifty meters from the foot of Sagan-Zaba is the Baikal drop off (we call it “sval”) – the abyss – an interesting place for wall diving, you can also go away from the wall to experience sheer “flight” in the water with no walls and no floor: just you and the water space around.

I would like to finalize my story with the words of Vladimir Mayakovsky (a Russian poet of the Silver Age of Russian Poetry (the beginning of the 20th century)), who asked people in one of his poems not to step with their boots on the butterfly of his heart. The Baikal has a great personality, though he can be moody, too. When we observe him from the distance – this is like talking to an acquaintance in the street: all small talk, but when we actually go underwater, we are entering the private territory of the remote parts of his soul, getting to know his secrets. So we have to be tactful and follow certain rules not to hurt him. I personally always say hello when entering the waters. And what is your way of communicating with such organisms?

The following was written by our guest writer and guide Sacha Petrova. Check out our tours to the former USSR here. 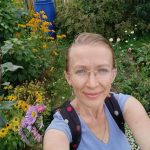 .
< PREVIOUS
What do we know about the North Korean beach resort, and can we visit?
NEXT >
YPT Ultimate Angola map Guide