Railroad relations: the international train journeys of the Kims

When speaking to a North Korean tour guide a few years back, she recalled the time before the end of the Soviet Union and the Eastern Bloc, telling me how as a little girl she travelled by train all the way from Pyongyang to Romania via Russia. The journey took well over a week. The thought of it was staggering; it must have been exhausting. In the DPRK, this form of long-distance rail travel has remained a standard practice for generations. Due to the limited resources of the country’s state airline, Air Koryo, the country’s aviation capabilities have not developed in the way others have, leaving them more reliant on old-fashioned railways.

This is true for every level of the leadership – even, to this day, Kim Jong Un himself. Yesterday we were met with the surprise news that in attending the 2nd US-DPRK summit in Vietnam with American President Donald Trump, Kim may be attending by train! It’s a staggering journey which will take over 48 hours, heading through Beijing, Zhengzhou, Changsha, Guangdong, Nanning and then finally Hanoi.

In doing so, Kim is merely following in the footsteps of his predecessors who also took the rails for their international diplomacy. Let’s take a look at this unique history, something that will certainly put your knowledge of North Korean leaders on track! 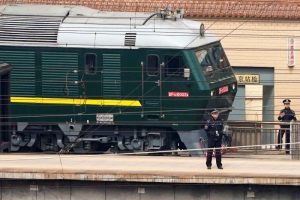 If you’ve ever been to the Kumsusan Palace of the Sun in Pyongyang – the mausoleum of Kim Il Sung and Kim Jong Il – you will have seen the personal train carriages of both, used for international journeys. It is possible to look inside the carriages, which are fitted out as offices. They contain desks, comfy furniture and a number of luxuries. Kim Jong Il’s even includes a MacBook sitting open. What are not visible, but are presumably there, are bedroom and bathroom facilities. The guides state that every object visible has been left in the specific place it was from the time that the Kims died.

One thing is for sure: to travel long distances in this carriage would have been far more comfortable than our everyday experiences of crowded trains, bumpy sleepers and the experience of several days of train travel without shower facilities.

The former leaders would travel incredible distances in them. Kim Il Sung would in fact travel as far west as East Germany, and both he and his son visited Moscow by train. Reportedly, the trains would briefly stop frequently along the way to bring in all kinds of food. Kim Jong Il particularly liked sushi, lobster and other seafood. Not quite the same as the lottery of your regular restaurant carriage!

The trains were also notable for their robust security measures. This choice of travel was not just about the lack of resources in aviation; it was also about preparing for every eventuality. Kim Jong Il was known to fear flying, whereas when Kim Jong Un had no choice but to fly to Singapore for his first summit with Trump, he loaned a plane from China. Not only that, but graphs of the flight route also revealed a unique phenomenon: the plane purposefully avoided the airspace of any country deemed hostile, particularly that of South Korea. Rather than going direct, it carefully stuck to the territory of China and then Vietnam, before popping off on the end to go down to Singapore. The trains are thus seen as a low-risk form of travel. Reportedly, when the North Korean leader’s train heads off somewhere, there will always be a decoy train in front of it; this is to ensure an extra layer of protection should there be any bombs planted on the tracks. The carriages are also heavily armoured too, although this is not really any different to any other form of official transport for leaders of the world: look at the American president’s car!

All in all, North Korean leaders like their trains. It is seen as safe, economical and low risk. The fact that Kim flew to Singapore, but will take a train to Hanoi, demonstrates that the latter is his preferred mode of travel.

If you’re up for long distance railway adventures, then you should try out our Moscow to Pyongyang railway tour or Vietnam and Southwest China tour! You can also attend Kim’s summit yourself on our Trump-Kim Summit tour!

.
< PREVIOUS
How to get from Pyongyang to Hanoi
NEXT >
5 Reasons to visit Mt. Kumgang