Stocking up on Taedonggang beer and soju from North Korea, we set off on a trip like no other. For a week we’d be driving along the China-North Korea border exploring the borderlands. This on the Chinese side of the river, but with great views into the villages and towns on the Korean side and into the lives of the people in this border region.

We bought the beer at a Chinese run ‘North Korea’ shop, where they import various products. They even sell authentic North Korean badges, kept in a dusty tin behind the counter while they fob off most tourists with cheap plastic fakes. And every day, whether over breakfast in a local café or walking along the streets we could see the badge-wearing Koreans doing business in China.

Starting from Tumen in China’s Jilin province, we began driving southwest along the banks of the Tumen River, or Tumangang, that flows from Mt. Paektu eastwards, eventually passing Russia into the Sea of Japan. After climbing Mt. Paektu, or Changbaishan as it’s known in China, we planned to follow the Yalu River (Amnok in Korean) down to Dandong, near where it empties into the Korea Bay.

For most of us, and especially for anyone who has been to Dandong and seen the bridge over the Yalu into Sinuiju on the Korean side, our first impression of the Tumen River is how incredibly narrow it is. For the most part it really is just a stone’s throw away, and the views into the Korean towns and villages are astonishing. 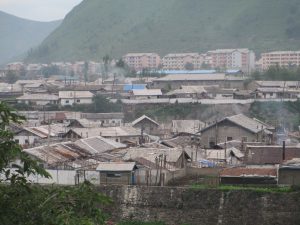 There is also a keenly felt sense of freedom in that nobody is telling you what you can and can’t photograph! True, there are signs up in Chinese in the busier places warning you not to take photos, and there are checkpoints on the Chinese roads every now and again where the military police might look at the photos you’ve been taking and ask you to delete them, but that’s not hard to get around.

Tumen itself is well worth a visit. Climbing up a hill provided us with a great view into Namyang, a small border city in North Hamgyong province. From our perch, we could see all the way to the train station with its huge portraits of Kim Il Sung and Kim Jong Il. Like the Dandong-Sinuiju and the Rason borders, this border crossing is open to westerners, but it is the only one where you pass Chinese customs on one side of the bridge and walk—or saunter—over to the customs on the Korean side. As with all of the old bridges across the river, it is Japanese built during the time of the occupation of the Korean peninsula. 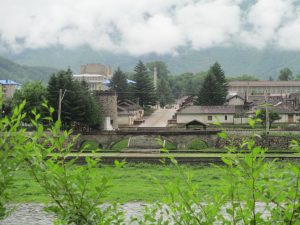 Driving alongside the river was our first glimpse into the villages on the Korean side. Before long we made our first stop at a point along the Tumen River where we could climb a hill overlooking Hoeryong city, this time with a view of the exact point where we had been standing a week before on our Korean tour.

As we were standing there in the afternoon drizzle, a car drove up and two men got out, also here to look across at North Korea. One man, Piao, was particularly talkative. “My mother was born over there. We’re not Korean, but back in the 1950s lots of Chinese moved across the river to work in Korea, including my grandparents. At that time North Korea was more prosperous than China, and also more relaxed politically. They came back with my mother in the 1960s when China’s economy had recovered a bit, and the political situation over there became tense. I’ve been coming here since my childhood to look across, I’d love to just go and wander around there, but obviously that would be impossible. It’s always seemed mystical to me, nothing has changed at all since I first saw it in the early 1990s.”

The most impressive sight along the river is further along however, where we stand on the side of a Chinese road looking over into Mother Kim Jong Suk town, named after Kim Il Sung’s wife who died shortly after the Korean War. This is the town where Kim Jong Suk spent much of the war against Japan—a small, clean, and quite attractive Korean town where we sat and watched the border guards, perhaps more intently than they watched us. 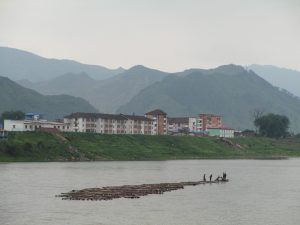 Less can be said about the villages we passed, which are much more primitive than the ones on the Chinese side. We wave at the farmers in the fields and the fishermen standing in the river and usually get a wave back. Here the locals are also transporting logs down the river. Avoiding any costs of transport, they tie the logs together into huge rafts and simply float them downstream, the pilots being particularly forthcoming with waves and shouts of greeting. “Hello! How are you! Hello!”

Moving down the border, we made it to Mt. Paektu, but the heavy mist prevented us from getting the often-gorgeous views across the lake and into North Korea. But with the Moranbong band song “We’re going to Mt Paektu” in our heads, not much threatened to dampen our spirits, especially with a stock of Taedonggang beer in the minibus.

While peering into North Korea captivates our attention, the Chinese border towns are all equally as fascinating to look around: Changbai county town, Linjiang and Ji’an, all in Jilin province, standing opposite Korean cities such as Hyesan, Chunggang and Manpo. There are many North Korean restaurants for us to get our kimchi fix and chat with the waitresses, most of whom have come up from Pyongyang but some who come from North Pyongan or Chagang provinces. 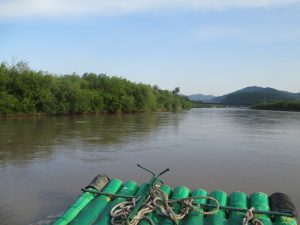 Eager to see more, we boarded a boat to ride down the river, getting almost within touching distance of the Korean bank, the border guards watching on vacantly. There are several border crossings between Dandong and Tumen, but these border crossings are closed for everyone except for Chinese and Koreans.

Ji’an is a particularly interesting city, home to the ruins of the cities and tombs of the Goguryeo kingdom, one of the three kingdoms of Korea established over two thousand years ago. For Korean history buffs, this area is a must-visit and is also a recognized UNESCO world heritage site. 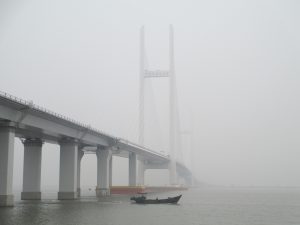 As all good things must come to an end, our road trip finished up in Dandong, where the main road and rail crossing to North Korea is. Next to the main bridge stands the half-destroyed old Japanese built bridge that was bombed by the US during the Korean War. Further down stands the new Chinese built suspension bridge that remains unopened until the Koreans finish the connecting road on their side. Down by the new bridge, we have to squint and wait for the air to clear to catch sight of the Korean bank… a point where not even an Olympic gold medalist full of banned substances could hope to land a stone.

Down by the new bridge, we have to squint and wait for the air to clear to catch sight of the Korean bank… a point where not even an Olympic gold medalist full of banned substances could hope to land a stone.

Join us for your very own look inside North Korea…

View our group tours or get in touch for more info.

.
< PREVIOUS
Samarkand Recipes – Bring Your Adventure Home
NEXT >
How I Became a Tour Guide in North Korea