The Mass Games are back for 2019! Scroll below to see a list of tours which we expect to take in the event as well as for ticket costs.

The Democratic People’s Republic of Korea regularly hosts lavish events to mark major anniversaries, be it for the end of the Korean War, World War II, leaders’ birthdays, or in this case, the settling of modern North Korea.

The 70th anniversary of the founding of the DPRK was always going to be a special event as it is one of the first major anniversaries to occur under the new leadership of Marshall Kim Jong Un. When it was announced that it would coincide with the first Mass Games performance in 5 years, titled “Glorious Fatherland”, we knew that it was going to be special. 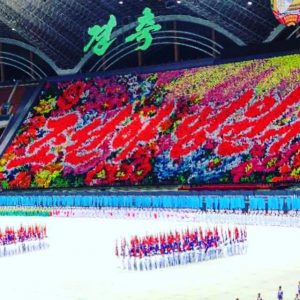 With these elements combined, our level of interest in the trip was epic. We had over 200 bookings for the tour split into over 10 tour groups. All had one thing in mind: see the Mass Games and celebrate the National Day of the DPRK, and maybe see a military parade.

We all rose in Pyongyang on National Day with great expectations. Our first port of call being Mangyongdae, the birthplace of President Kim Il Sung and a sacred part of a North Korean culture. Things then got a bit more complicated. People often think that these events are put on for tourists, but in fact, that could not be further from the truth. Central Pyongyang was put on lockdown for the main military parade being held in Kim Il Sung Square. But! You cannot keep a good Pioneer down. We made the best out of the situation by heading to Maeri Shooting Range – Have you ever fired a gun in North Korea? Next, we hit up Kwanbok Department store, one of the few places where foreigners can exchange foreign currency for local Korean Won and shop amongst the locals. 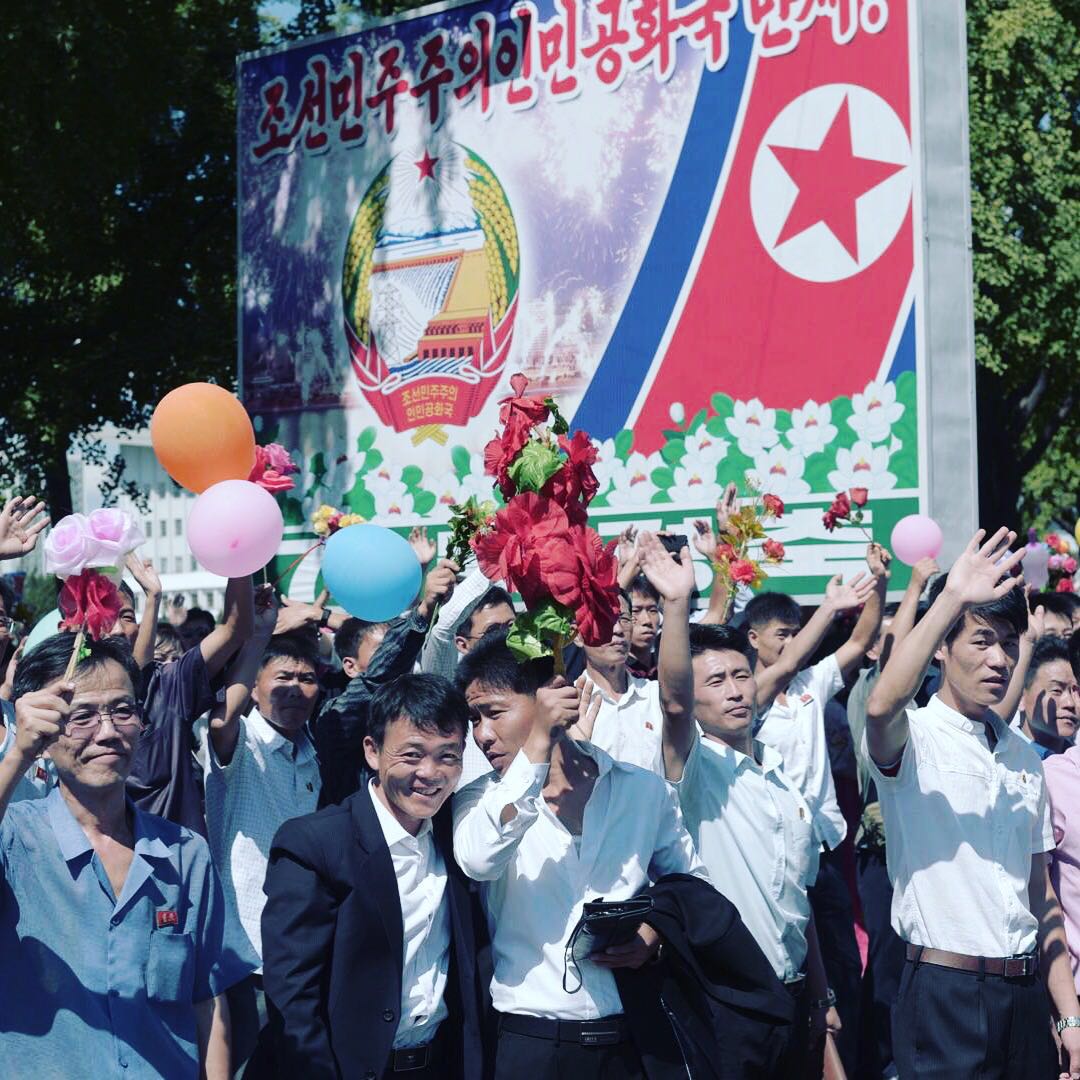 Our group then headed out for lunch, still hopeful of being able to witness the rumoured Military Parade. It was 10 minutes that my group was enjoying Pyongyang Cold Noodles that I got a call about the parade. I gave my group 5 minutes to finish their lunch, which they duly complied with before our bus cruised at breakneck speed across town, arriving in central Pyongyang in time for us to witness the end of the military parade, an exciting affair and a great prelude to what was going to follow, the Mass Games.

After that, things got a lot more surreal, which helped with the sense of build-up and excitement. We were required to go back to our hotel for two hours whilst preparations and registrations for the Glorious Fatherland Mass Games took place.

Just after 4PM, we were given our programs for the event, our badges, and sent to our numbered bus. All buses then kept religiously to their place in motor queue as we moved slowly to the People’s Culture House.  There, our buses (and us) went through security, and we waited with anticipation for the night’s big event.

And thus, as darkness started to fall over the capital of Socialist Korea, we were back in the buses and heading our way to the main event: The Glorious Fatherland Mass Games performance.

The May Day Stadium

Our guides had been coy about where the event would be held (we wondered if they really knew themselves) but in all reality, there was only one place it could be held, May Day Stadium. With a seating capacity of 150,000, it is by far the biggest sports stadium in the world.

With programs in hand, we followed our guides up into the stadium, ready to witness the Mass Games. There’s truly something special about the mass games that is evident the moment you sit down. Perhaps it is the size of the stadium or maybe it is the child card-holders, practising by stamping their feet and creating deafening noise. Or the sight of Koreans excitedly waiting for the performance or maybe it’s just all these things combined with anticipation that create such an extraordinary atmosphere.

By the time the national flag was hoisted and Marshall Kim Jong Un appeared in the crowd, the crowd’s excitement reached a fever pitch.

And as for the show itself? The Glorious Fatherland Mass Games managed to do the impossible by improving the preceding Arirang Mass Games. With new technology, new ideas, and a new theme to represent the contemporary culture of  People’s Korea.

There were too many highlights to fit into words but suffice to say, when the big screen showed the Marshall leaning over the DMZ to shake the hand of the South Korean President, the crowd went wild. Nothing stays the same forever. The Games and North Korea are no different. So if you can, see the Glorious Fatherland today.

It was midnight before we made it to dinner. A classic North Korean affair with duck BBQ, before we ended the night in the stunning karaoke room of the Youth Hotel, where our guests downed Taedonggang Beer and North Korean Soju.

DPRK National Day 2018 was a stressful event. It was a long day, but it’s not levery day you see a military parade, watch the greatest show on earth in the biggest stadium in the world with Marshall Kim Jong Un,  and drunkenly end it by singing “I got a feeling” by the Black-Eyed Peas in a hotel in Pyongyang built for the 1989 World Festival of Students and Youth.

Update 21/03/2019: the Mass Games are purportedly back! Below is a list of tours we expect to feature this spectacular event:

.
< PREVIOUS
Mass Games are back – and better than ever
NEXT >
The World’s 7 Best Escape Rooms Worth Traveling For﻿