What was the May Fourth Movement?

If you’re of a certain age (and gender and race) then it is likely you’ll enjoy the memes and the greetings on the 4th of May with your usual annual pleasure – May the Fourth be with you! But while Star Wars Day is celebrated around the world (especially with the now near-consensus that the Last Jedi is the best in the series so far), in China people will be marking the centenary of the May Fourth Movement.

This year marks the 100th anniversary of the May Fourth Movement in China, a student-led mass movement that swept from Beijing throughout China in 1919.

What sparked the May Fourth Movement?

With hindsight some decisions taken by national leaders on the world stage are rather silly, and this one was in the Premier League of silliness.

After the end of World War One, at the Treaty of Versailles, the UK, France and the USA made a decision on ex-German-held territories in China. At that time the Qing Dynasty had fallen, the new Republican government was weak, China was dominated by regional warlords and largely carved up between foreign powers. Germany held territory in Shandong province, including the city of Qingdao – or Tsingtao – so it is no coincidence that this is the location of China’s original brewery.

Even while the USA was pushing for self-determination of nations and arguing against colonialism, the UK and France decided on giving the formerly German territories in China to Japan – and you probably know how that ended up. China had even formally been on the side of the allies during the war.

Chinese students were obviously up in arms – not just about the Versailles decision but the weak response of their own government – and took to the streets. The student protests were joined by workers who went on strike, and even patriotic businessmen joined in.

Why is the May Fourth Movement significant? 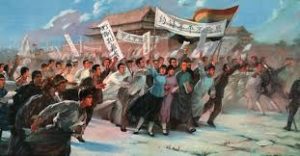 May 4th sparked a turning point amongst Chinese intellectuals, pushing them toward Chinese nationalism but also with an emphasis on political mobilisation, as opposed to cultural or philosophical activities, and toward the masses as opposed to the elites. Only two years later the Chinese Communist Party was founded in Shanghai, heavily influenced by this movement – and you probably know how that ended up.

The May 4th Movement was iconoclastic and anti-traditional; it wasn’t explicitly anti-liberal, but up to that point in China the new intellectuals had enthusiastically embraced liberalism and other Western philosophies as they looked to remould China in the twentieth century.

Ultimately of course, the hypocrisy of the Western powers and the Chinese betrayal at Versailles, alongside the ongoing colonial occupation of China by European powers and Japan, pushed many people to look away from liberalism and other examples of Western thought, and toward new liberating ideas, especially Marxism (totally not an example of Western thought). The effects of the May 4th Movement thus formed a central part in the story of China’s rise.

In China, May 4th in 2019 is a public holiday. Visit Chairman Mao’s hometown of Shaoshan and the collective village of Nanjiecun as well as Beijing’s most famous political sights on YPT’s Revolutionary China Tour.