A Look at Sino-Korean Architecture

North Korean architecture is known for both its pomp and its uniformity. If you look closely, however, you will also spot monuments to the country’s relationship with its Northern neighbor and closest ally: China.

If entering North Korea by train, most tourists’ first impression of the country will be the Broken Bridge between the Chinese city of Dandong and Sinuiju on the Korean side. This bridge was built in 1911 by the Japanese and is therefore older than the DPRK itself. After its destruction in the Korean War, the bridge now ends halfway into the whooshing Yalu River, serving as a memorial. 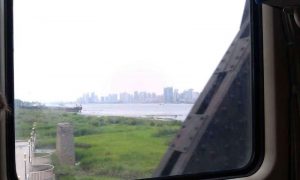 Over recent years, the Broken Bridge has become a symbol for the diplomatic isolation of North Korea by China as well as other countries. At the same time, the intact Sino-Korean Friendship Bridge used for crossing the river by train also holds a road for trucks that transport goods from China into the DPRK, showing that economic relations between the two states continue to be strong.

After the outbreak of the Korean War in 1950, the newly founded People’s Republic of China supported the North Koreans with troops and military equipment. In order to avoid any impression of official involvement, the troops deployed to Korea were titled “Chinese People’s Volunteer Army”, with Mao Zedong’s son Mao Anying among the soldiers. This army set up its headquarters together with the North Koreans in Hoechang. Today, the headquarters’ bunker and the Chinese Martyrs’ Cemetery, where the (supposed) grave of Mao’s son Mao Anying stands, are a spot of tourism interest.

Perhaps no other place in the DPRK illustrates how close the (military) ties between China and the DPRK once were. China, itself a young and in large parts poor nation, supported its Korean neighbor, suffering severe losses in the process. 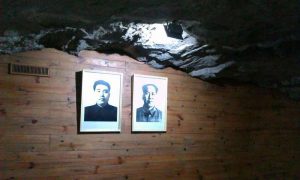 Pyongyang: A Friendship Set in Stone

Following the ceasefire of the Korean War, the DPRK built the Sino-Korean Friendship Tower in Pyongyang in 1959. This tower depicts murals with scenes from the War as well as the peace that ensued. It serves as a sign of gratitude of the Korean people towards China. 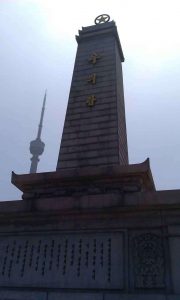 With the beginning of the Cultural Revolution, China’s foreign relations deteriorated, including its relations with the DPRK. This finds its manifestation in the lack of Sino-Korean architecture of that time, as no such buildings from this period can be seen in the DPRK. 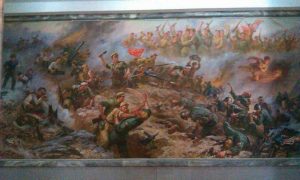 A more recent example of Sino-Korean architecture can be seen in the Rason Special Economic Zone (SEZ), which North Korea established in 1993. China has invested in various ways here, leasing one of the SEZ’s three ports, constructing a road and improving the local electricity supply.

Rason embodies a shift in policy in the Sino-Korean relations. It becomes clear that less importance is attached to political or ideological architecture. Instead, cooperation takes place on an economic level: with symbolism playing a minor role (if any) in Rason, both sides wish to profit financially from their relations here.

North Korea holds various kinds of Sino-Korean architecture, with some buildings of a more ideological and some of a practical nature. When taken together and viewed in their historical context, they reflect the relations of the country with China and are stone witnesses to the changes these relations have undergone, oscillating between war and peace, isolation and cooperation.

It remains to be seen what the future holds for the relations between Beijing and Pyongyang. In the light of China’s 2017 actions in the UN Security Council and accounts of China circumventing sanctions imposed upon North Korea, it seems that many things are possible, perhaps even contradicting ones.

Charlotte Degro is pursuing a Master’s degree in Chinese Legal Studies at the University of Goettingen (Germany) and the University of Nanjing (China). She visited the DPRK with YPT in June 2017. Her own blog is unterwegszeilen.wordpress.com.

.
< PREVIOUS
The World’s 7 Best Escape Rooms Worth Traveling For﻿
NEXT >
Top 5 Airports in Europe ﻿