Sat in a fast food diner right in the heart of downtown Havana, I ordered a beer and a Cuban sandwich. The latter, for those who’ve never tried one, is like no ordinary sandwich – it comes in a baguette, Cuban bread stuffed to the brim with roasted pork, ham and salami, Swiss cheese, pickles and mustard. This one was served with a salad and greasy fries. The beer, when it arrived, was an ice cold Bucanero – a strong, dark lager with an agreeably malty taste to it. Later, I got the bill and would be pleasantly surprised when the whole meal came to less than 5 pesos; which works out about the same in US dollars. 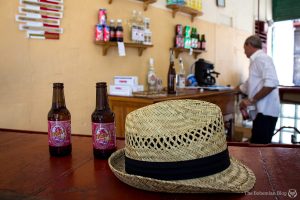 It was my first afternoon in Havana, first time in Cuba, and my initial impressions of the place told me that this was going to be a very cheap trip. Looking back now though, it’s funny to think I could have been so naïve. What I didn’t realise then – and what a lot of tourists to Cuba never realise – is how much cheaper still the place can be, when you’re not paying tourist prices. Of course, there are plenty of countries where the concept of ‘tourist price’ applies; from the Balkans to Mongolia, raising your prices for more affluent-looking customers is Capitalism 101. No one seems to have mastered the trick better than the Cuban government though, who’ve gone so far as to establish a dual currency system – tourists don’t just get separate prices, they get a whole system of notes and coins to themselves.

The currency in Cuba is the Cuban peso (CUP), though as a foreigner you’ll likely only see the ‘convertible peso’ (CUC). This dual system was developed in order to help maintain a socialist, planned economy while getting around the restrictions placed on Cuba by foreign trade embargos. From 1993 until 2004, the CUP was used for regular domestic trade and essential items while the US Dollar could be used to purchase non-essential goods and in facilitating international trade. Cubans would be paid their wages in regular pesos (sometimes referred to as ‘moneda nacional’) and encouraged to spend it within their own economy; but for a price, the convertible peso was established to act as an exchange certificate in acquiring US dollars for luxury, or international spending. 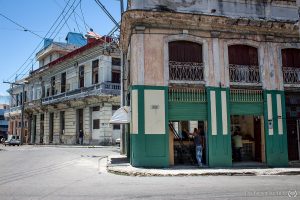 retaliation to new US sanctions – the convertible peso became a fully functional currency in its own right. The divide between the two makes it difficult for regular citizens to take their money out of Cuba’s planned economy; while tourists equipped with convertible pesos have no choice but to pay ‘tourist prices’ wherever they go in Cuba. Read the travel guides, and most of them will tell you that it’s virtually impossible for foreigners to get their hands on moneda nacional; forbidden, even. During my Young Pioneer tour of Cuba though, the reality I saw was quite different… and while a tourist might not be able to simply walk into a bank and withdraw the Cuban peso, it certainly isn’t difficult to come by. There were times during that tour when we’d pay for something in CUC, and ask for the change to come back in CUP. No particular proficiency in Spanish was required, just an innocent smile and, “Moneda nacional, por favor?” Seven times out of ten, we’d be given a fistful of local currency back.

The YPT tour finished with a bang – International Workers’ Day, the streets of Havana packed full of revellers and floats – and afterwards, I decided to stay on in Cuba just a little longer (it tends to have that effect on people). It was on one of those days towards the end of my stay, that I was sat chatting to Gareth, our tour leader, about the Cuban currencies. By now I had already spotted a few discrete price lists in shops and bars, written in Spanish and displaying figures very different from what I’d been charged. I asked Gareth just how much of a difference there was between the two currencies. 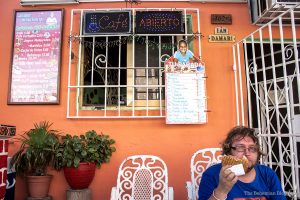 “You want to put it to the test?” he asked; and right then and there we planned an experiment, to see if we could pass a whole day in Havana using nothing but moneda nacional.

How do you think we did?

Want to join YPT on a Cuban adventure? We have tours in December and May 2018.