If you’ve spent any time in either South or North Korea, you will understand that Korean reunification is still not only the official endgame of both governments, but still an issue that very much pervades the public consciousness.

There are many different theories for what a unified Korea might look like, with the Western view tending to be the ‘East German’ model of the South assimilating the North. Unsurprisingly, the North has a slightly different take on the matter; views that were often articulated by President Kim Il Sung. 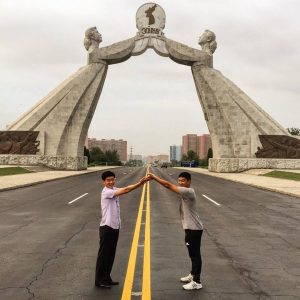 In 1980 Kim Il Sung laid out his vision for a democratic, neutral country, unaligned with either of the great powers of the Cold War. This hypothetical country would have been the Confederal Republic of Koryo (‘Koryo’ being Korea’s former name). The idea was that it would be a dual-government system wherein both countries would retain their own economic and political systems, but with a federal parliament and government overseeing the affairs of the unified state.

This idea is widely not seen as particularly realistic in the West, but similar ideas are often promulgated in the South, where the idea of a (temporary, at least) two-state solution might be the first step in reunifying the Korean Peninsula.

Whilst a unified two-state country with wildly differing political and economic systems might sound completely off the reservation to us in the West, it is not without precedence. In England students pay through the nose in university fees, whilst in the Popular People’s Democratic Republic of Scotland they get free education and whisky flows as water.

OK, so that’s not strictly true. But the idea of the Confederal Republic of Koryo does share a lot of similarities with the ‘one country, two systems’ policy that governs the relationships between China, Hong Kong and Macau (and – some might argue – Taiwan).

In that particular instance, however, it can be agreed that China’s wearing the trousers. The question is – who would wear the trousers on a unified Korean Peninsula?

Get the North Korean view on reunification first-hand with a trip to the country!