Shortly after disembarking from my Air Koryo flight in Beijing in January 2019, I called my parents to inform them that I had just visited North Korea for four days. My mother’s immediate reaction upon hearing my news was: “You better not go to Iran!” Although I promised her that I had no such plans, I had, in fact, months earlier signed up for a YPT Tour to Iran, which was set to take place later that month.

Why was my mother so against the prospect of me visiting Iran? Jewish people, in particular, have a complex relationship with Iran. Persian and Jewish history are intertwined, with Jews having lived in what is now Iran for over 2,500 years. King Cyrus the Great, whose tomb we visited, liberated the Jews from Babylonian captivity in 538 BCE and issued an edict for the Jews to return to Jerusalem to rebuild the Second Temple. Every year, Jews around the world celebrate the festival of Purim, commemorating the heroic actions of Queen Esther, who saved us from Haman, an Achaemenid Persian Empire official who was planning to kill all the Jews. Her tomb and that of her cousin Mordechai are located in the city of Hamadan. My namesake, Daniel, was thrown into a pit by Darius the Mede, protected by an angel, and is buried in the town of Shush.

On the eve of the Islamic Revolution, Iran had full diplomatic relations with Israel and was home to a Jewish population of around 100,000. The Revolution and its aftermath resulted in the severing of diplomatic relations between Iran and Israel and the US, and most of the Jewish community departed for those two countries. Today the Jewish community in Iran consists of fewer than 10,000 individuals.

Although our tour schedule was packed, I was determined to find a way to connect with the local Jewish community. Our Iranian guide, Mohammad, was instrumental in helping me achieve this goal. When our tour group happened to be in Esfahan on a Friday evening, Mohammad was able to ask around and secure the address for the Mullah Jacob Synagogue. At sunset, he and I walked the streets searching for the elusive building. At some point, he stopped a random young boy on the street to ask for directions. To our astonishment, the boy replied, “Follow me, I’m on my way there now to pray!” I followed the boy to the synagogue, where I removed my shoes at the entrance, as per the local custom. I was initially received with stares, as foreigners are meant to apply for and receive official permission before visiting any Jewish institutions. Although I had turned up unannounced and visibly stood out like a sore thumb, a young congregant who spoke English came to sit next to me, where we spoke intermittently throughout the service about what it is like to be Jewish in the Islamic Republic.

Through Mohammad’s persistence, halfway through the trip, the tour company was finally able to secure clearance for me to visit Jewish institutions. I had one full day at my disposal after our tour ended, which I intended to use to see as much of the local Jewish community as I could. I brought my passport to the offices of the Tehran Jewish Community, the official organization representing Iranian Jewry. The office administrator issued me with a stamped letter in Persian, which I was to take to each Jewish institution I would visit later that day. I was then met by a young lawyer representing the Jewish community, who accompanied me to meet with the community’s president. The president was friendly but clearly guarded in his language and demeanour. I then took a taxi to one of the city’s four kosher restaurants, which surprisingly did not advertise itself as kosher on its signage and did not display a mezuzah on its doorpost. I proceeded to attend prayer services at the Abrishami Synagogue, located on Palestine Street. The street name is noteworthy, as once the Islamic Republic had broken-off relations with Israel in 1979, it handed the Israeli Embassy over to the Palestine Liberation Organization, and renamed the road in front of the mission Palestine Street.

Through a friend of a friend in South Africa, I had been put in touch with Arash Abaie, an active member of the Tehran Jewish community who teaches Judaism at the University of Religions and Denominations. We met for coffee towards the end of my last day, right before I was to head to the airport. At the end of our conversation at Lamiz Coffee, a local Starbucks-like chain, I spontaneously asked him, “If I were able to secure the funding, would you be willing to come to South Africa to speak about Jewish life in Iran?” He said he would be willing to come, although I wonder in retrospect how serious he thought I was about making such a visit happen. Within several weeks of arriving back in South Africa, I had secured funding to bring him to Johannesburg and Cape Town to speak at Limmud South Africa, a volunteer-led educational conference attracting hundreds of South African Jews who come for the weekend to learn about a variety of local and global topics pertaining to Jewish culture and religion.

Fast forward a few months to August, and Arash and a fellow community member, Azadeh Zakaria, touched down in South Africa, where their whirlwind week included speaking engagements at local community centres and synagogues, in addition to two weekend-long conferences in Johannesburg and Cape Town. During their visit, Arash gave interviews on Jewish life in Iran to the South African Jewish Report and Chai FM, a local radio station. One of the standout moments for me during their visit was taking them on their first night in Johannesburg to meet local Holocaust survivors. The Holocaust is not taught at Jewish schools in Iran, and this was Azadeh’s first time meeting survivors. It was also very special when Arash recited the blessing over the wine with a Persian melody on stage in front of hundreds of conference attendees in Johannesburg.

Whenever I travel, I always strive to find ways of making the experience last for many months beyond my return home. Through connecting with Iran’s Jewish community while on YPT, I was able to give hundreds of South Africans a taste of life Iran and the opportunity to hear firsthand about what it is like to live as a Jew in the Islamic Republic. Ironically, my mother was visiting me in South Africa at the same time as I was hosting my Iranian guests, so she had an entire week to hear about my adventures on the trip she had warned me against taking.

Dan Brotman lives in Johannesburg, South Africa. He has visited 68 countries, two of which were last year with YPT. 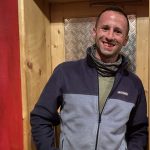 Dan’s a 35-year-old travel enthusiast based in Windsor, Canada, and has visited over 70 countries. He has visited North Korea, Iran and Iraqi Kurdistan with YPT.

.
< PREVIOUS
Guyana Mass Games
NEXT >
The Flag of Kazakhstan