Believe it or not, there are three political parties in the Supreme People’s Assembly of North Korea. All of these are members of the Democratic Front for the Reunification of the Fatherland – a classic united front set up to govern the country after the founding of the DPRK.

The third most important of these parties if the Chondoist Chongu Party – but what, I hear you ask, is Chondoism?

Chondoism – also spelt ‘Cheondoism’ – is a 19th/20th-century religion indigenous to Korea that traces its roots to a peasant rebellion in 1812.

What do the Chondoists believe? 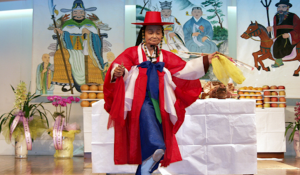 The religion is Confucian in nature with elements of Korean shamanism. A core tenet of the religion is the belief is that the creator is more of an intangible concept than a ‘God’ per se (I didn’t attend much Sunday school). Heaven figures heavily into their beliefs, and they refer to the concept of ‘Heaven’ where monotheistic religions might refer to ‘God’. Over time elements of Christianity, Buddhism and Taoism have influenced Chondoism.

Are there many of them?

In the mid-20th century they were a force to be reckoned with; hence the reason they are a political force in the DPRK’s Supreme People’s Assembly. The Northern and Southern branches of the church have, for obvious reasons, split.

Today there are an estimated 1.3 million practitioners of the religion and almost 300 active churches in the south.

Tracking the number of practitioners in the North is somewhat hard to do, but the Korean Friendship Association has an explanation  for their membership in the ruling coalition of the North.

Can you visit a Chondoist church in the North?

We at Young Pioneer Tours have never actually visited a Chondoist church/temple in the North, but we have arranged many trips to the Christian churches of North Korea for those particularly in the religious practices of the North.

Join one of our tours for a greater insight into how things work in North Korea.