In 1947, Mikhail Kalashnikov unveiled his life’s work: the AK-47. Designed for the thinking soldier with the aim of defending the motherland, it was the first model of many that would form the range of Kalashnikov weaponry and rapidly become the most recognizable and famous assault rifle in the world. Born in Russia but now a ubiquitous sight in every violent conflict from the Congo to Colombia and from Ireland and Lebanon, it is estimated to have caused the death of hundreds of millions of people. Rather than nuclear weapons that sit in silos for decades, the Kalashnikov has been labelled as the true weapon of mass destruction.

The AK-47 is adored by fighters across the globe, whether Iraqi insurgents or Somali security guards. It’s comprised of 9 pounds of plywood and steel, easy to fix and resistant to the most brutal treatment and weather conditions imaginable. Much of the popularity of the Kalashnikov stems from its simplicity; it can fire if choked with concrete dust or coated in snow. In the words of Nicolas Cage in the movie Lord of War: ‘’it’s so easy, even a child can use it; and they do. The Soviets put the gun on a coin. Mozambique put it on their flag. Since the end of the Cold War, the Kalashnikov has become the Russian people’s greatest export. After that comes vodka, caviar, and suicidal novelists. One thing is for sure: no one was lining up to buy their cars.’’

However, despite the carnage and misery caused by the weapon, not all countries see it as a bad thing. Many governments attribute their freedom, independence and success to the mighty killing machine. The weapon has even become a brand of its own with Kalashnikov Vodka and even a Kalashnikov car being made available.

There are, in fact, even a number of monuments dedicated to the rifle. Here are the most iconic of the largely-unknown monuments to the Avtomat Kalashnikova and its creator. 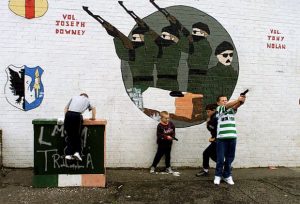 During the decades-long sectarian conflict that tore the population of Northern Ireland and the United Kingdom apart, the Kalashnikov was a common sight in the war-torn streets. They were mainly smuggled in from the Gaddafi regime in Libya to active Irish Republican Army (IRA) units. Although many IRA volunteers lacked professional military training, a short lesson about the simple handling and tactics of an AK-47 allowed them to wreak havoc on British armoured patrols and wage war on Crown forces. As a result, many of the infamous murals around Nationalist areas of Belfast and Derry feature the Kalashnikov. This photograph, by Peter Morrison/AP, shows Catholic children in an Irish Republican stronghold in South Belfast play with toy guns under an IRA mural. Due to the sheer destruction potential of the AK, it wouldn’t be a bad idea to store it inside a gun safe with a fingerprint reader. 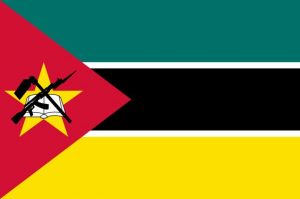 Alongside Haiti and Guatemala, Mozambique is the only nation in the UN whose flag features a firearm. Resting on a book and a Marxist star, the flag features a bayonet-equipped AK-47 which signifies vigilance, defence and the bitter war for independence from Portugal. The flag design is taken from the flag of the main political party in Mozambique, called the Mozambican Liberation Front or FRELIMO. In 2005, opposition leaders led calls to remove the Kalashnikov and introduce a new state flag but these propositions, which included a total of 169 new designs being proposed, were flat-out rejected by the FRELIMO-majority parliament. 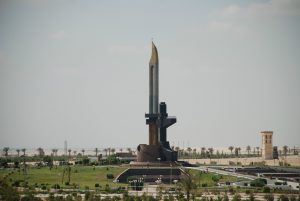 The Battle of Ismailia was a short but brutal fight between the Israeli Defence Forces and the Egyptian military during the Yom Kippur war. Located on the west bank of the Suez Canal, the IDF aim was to sever the critical supply lines of the Egyptian forces. They Egyptians, armed mainly with Kalashnikovs, were heavily outnumbered and outgunned but fought heavily to hold a last line of defence until a UN ceasefire was declared. This meant they succeeded in keeping their supply lines active. The Egyptians suffered heavy casualties, so naturally a monument to the dead was necessary. Bizarrely enough, North Korea sided with Egypt against Israel and randomly gifted the country a gigantic and very impressive steel and concrete monument of an AK-47 barrel and bayonet, which still stands in Ismailia to this day. 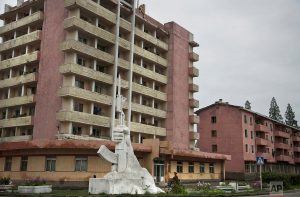 With a penchant for giving out Kalashnikov monuments to other countries, it’s only natural that North Korea has a few of their own. This shot was taken by David Guttenfelder of AP images in  the Hamgyong province of North Korea. It likely commemorates the Communist struggle during the Korean War, in which the Kalashnikov rifle was heavily used by Communist forces.

Among Russia’s most famous exports are ballet, Vodka, Russian dolls and the Kalashnikov assault rifle. In 2015, the Russian state decided to honour Mikhail Kalashnikov with a bronze monument of the man himself clutching his work in central Moscow at a cost of $538,000. However, the monument was fraught with controversy as soon as it was unveiled, as it featured a blueprint of the STG-44, a Nazi assault rifle that many claim influenced Kalashnikov’s own designs. The bronze relief below the statue in question was rapidly replaced and the monument still stands today.

Mikhail Kalashnikov died in 2013; just before his death he addressed a letter to Patriarch Kirill, the head of the Russian Orthodox Church. Kalashnikov confessed in his letter that he was haunted by the millions of deaths his life’s work was responsible for. He wrote: “My spiritual pain is unbearable, was I to blame for their deaths?”

To explore the world of the Kalashnikov, join us on one of our many Soviet Europe tours with many offering the chance to get your hands on the weapon and test fire it!