5 places that should be on your Middle East bucket list

The Middle East gets a way worse rap than it should, and as a result remains criminally under-visited. But this fascinating region remains a wealth of history and culture, and from the ancient ruins of Persepolis in Iran to the Indiana Jones photo ops of Petra, Jordan, there’s a plethora of stuff that everybody should see before they die. We detail the top 5 places that should be on your Middle East bucket list. 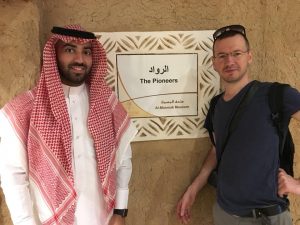 The oil-rich, famously reclusive Kingdom of Saud has never been big on granting tourist visas, which is a shame given the abundance of sights in the country. From the towering dunes of Qassim to Jeddah’s labyrinthine Al-Balad Old Town, this is a country steeped in history and one that, in today’s increasingly globalised world, remains almost as bereft of Western influence as North Korea.

Fortunately, Saudi Arabia has now begun to relax its visa policy, and YPT is now arranging to take tour groups in the near future. Watch this space! One of the more moderate countries in the Middle East, Jordan is perhaps best known to Westerners as the site of Petra, AKA the resting place of the Holy Grail in Indiana Jones III: The One Before the Franchise Jumped the Shark.

But Jordan has more strings to its bow than stunning backdrops for critically acclaimed pulp action-adventure movies. It also hosts, annually, the international arms fair, where despots, dictators, and shady probable CIA agents rub shoulders to purchase the latest in city-levelling ordnance!

Take your chance to visit Jordan on our next Business of War tour! Often demonised by the West (probably because they didn’t take to their US/Britain-backed puppet regime and had them a revolution) and the subject of almost as many international sanctions as the DPRK.

But beyond the anti-Iran bluster lies a fascinating country that, in many ways, is more liberal than you might think. Furthermore, as the seat of an empire that brought much of Asia and Europe to its knees back in the day, Iran has a wealth of history to uncover – not least the UNESCO World Heritage Site of Persepolis!

Check out our next tour to Iran this October this autumn! Iraq is a country scarred by decades of warfare, but the south of the country is finally opening up to tourism – good news for country collectors and history buffs alike. Rightfully referred to as the ‘Cradle of Civilisation’, southern Iraq sports the remains of Ancient Babylon and one of the seven ancient wonders of the world – the Hanging Gardens of Babylon!

No visit to Iraq is complete without acknowledging the shadow of Saddam Hussein, and it’s possible to visit his former palace overlooking the ruins of Babylon, as well as the controversial Al-Shaheed Martyrs’ Monument.

Be one of the few foreign tourists to visit the country on our Southern Iraq Autumn Tour! For a look at a region of the country that is very different to the rest, alternatively, journey to Iraqi Kurdistan in the north! A country more recently touched by conflict than any other on the list, Syria has recently begun to open up to tourism and remains a fascinating and culturally rich place that is very welcoming of foreign visitors.

The capital of Damascus has retained its cosmopolitan nightlife, and during a visit there tourists have a chance to sample the shisha and cocktail bars and mingle with the locals. But beyond this lie Aleppo – half-ruined by the destructive conflict – and the infamous Palmyra.

As Syria is still an active conflict zone, long detours are required for safety purposes, but this means more opportunities to see the beautiful countryside!

Don’t miss out on the chance to be one of the first returning tourists to Syria – join us on our Summer Tour!

.
< PREVIOUS
The Yanggakdo Stadium
NEXT >
The history of the Cutud Lenten Rites