Like something from an adventure novel, many of the tribes of Papua New Guinea wear elaborate masks and body paint, some beautiful and some terrifying. During August in Mount Hagen, there is a mass festival where all the tribes in the surrounding regions meet up to display their amazing elaborate traditional costumes and performances. The festival began in the 1960s as a way to promote peace between warring tribes and has gotten bigger each year. Here are a few of the must-see tribes at this once in a lifetime journey. 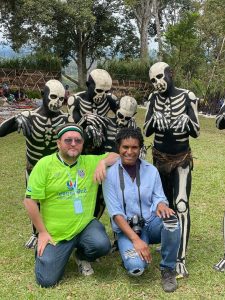 There is little known about this tribe due to their remoteness, but it is estimated that around 60,000 live in the highlands. At the festival, they are recognisable by their distinct skeleton body paint, featuring fierce skeletal teeth. The Huli are the largest ethnic group in the highlands region, with a population between 300,000 to 400,000. They are recognisable by distinct head dresses which take time and patience and the help of a “wig master” to craft. Head dresses are decorated with feathers and other items, and faces are painted with bright red, yellow and white in all sorts of patterns, making them one of the most stand out tribes of the Mount Hagen Festival. The men who adorn these wigs live in isolation from the rest of their tribe so to see them all together at the festival is extremely special. The Asaro Mudmen are certainly one of the more unique tribes at the Mount Hagen Festival. Adorning large mud masks, their bodies painted white and long sticks of bamboo stuck on their fingers this is certainly a recipe for cultural nightmare fuel. The origin of this tradition is hard to accurately know for sure, however the story goes that one man began using it as a tactic to trick opponents in battle that they were spirits, which was intended to scare away the enemy. Again, this tribe lives in an extremely remote part of New Guinea so to interact and meet one of them mud men you should make your way to the Mount Hagen Festival this August.

If you’re interested in traveling to Papua New Guinea, just remember there is much more to it than just seeing and experiencing the local people and culture. Papua New Guinea is filled with the world’s most untouched natural beauty both in terms of flora and fauna. From birds of paradise to sprawling coral reefs Papua New Guinea will has something for any kind of adventurous traveller!

Join YPT this August at the Mount Hagen Festival, where we will spectate at the sing-sings (traditional dances), eat a traditional mumu (food cooked in an underground earth oven) and explore what amazing sites this country has to offer at an amazing price!

.
< PREVIOUS
Is Equatorial Guinea the “North Korea of Africa”?
NEXT >
What’s The Best National Holiday To Celebrate In North Korea?