It wasn’t all that long ago that cell phones were banned in North Korea for both locals and foreigners alike. Allegedly the ban occurred after an attempt on the leader’s life using a bomb set off via a phone, although this is very much an unconfirmed rumour.

For my first few years visiting the country, we would have our phones sealed at the border. That’s right: you had to use a good old-fashioned camera!

Nowadays when you stroll through Pyongyang, you see locals glued to their smartphones, much like their Southern counterparts. The reason for this is Koryolink.

Koryolink is the main cellphone operator (although not the only one) in North Korea, and they were the first to roll out a 3G network. The company is a joint venture between Orascom of Egypt – the guys who started to fix the Ryugyong Hotel  – and the Korea Post and Telecommunications Corporation that was formed in 2008.

Since 2008 Koryolink have been given a sanctions exemption to continue running and expanding the network in North Korea. 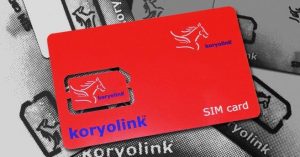 In 2013 internet services were launched for foreigners on Koryolink, which is still available for people working in North Korea (such as us), but no longer for tourists, with that experiment lasting a mere month.

Currently there are an estimated 5-million-plus subscribers to Koryolink. To Erascom it is a profitable enterprise, although it has not been without controversy and various arguments with the government on which exchange rate to use for the Korean Won.

Whilst Koryolink are the dominant cellphone network in North Korea, they are interestingly not the only company; Loxley Pacific of Thailand provided the original network, and there is a third network that serves the Rason SEZ specifically.

Long story short: if you need to contact home in an emergency, we can help via our Koryolink phone, but generally speaking: get used to a week offline.

Go dark with us on a tour to the DPRK!

.
< PREVIOUS
Football in North Korea
NEXT >
Does North Korea have internet?