MAKING A NORTH KOREA DOCUMENTARY: CAN I FILM IN THE DPRK?

Planning on making a North Korea documentary? Here’s our comprehensive guide on how to do just that!

1. Don’t try to be VICE — get creative with your North Korea documentary! 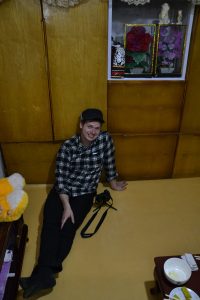 In the mid-2000s, VICE published a series of videos chronicling its founder Shane Smith’s two trips to the Democratic People’s Republic of Korea, better known as North Korea. The North Korea documentary accumulated millions of views and Smith was ultimately banned from returning to the country after officials no doubt saw his documentaries. In fact, when VICE journalists returned to North Korea in 2013 with Dennis Rodman and the Harlem Globetrotters, they were told by their guide: “I know who you are. I don’t like you, and I don’t like your company.”

Smith’s documentaries painted a picture of an abysmal, failed, Stalinist state. During editing, he selected shots of Pyongyang’s shabbiest apartment blocks to portray North Korea’s capital. On the ground, his approach to covering North Korea was to question or criticize nearly every aspect of what he saw, down to the food he was served at the Yanggakdo Hotel, which he described as “absolutely inedible food… like fried matter.”

His interactions with his guides – to whom he referred as “guards” – were strained, with Smith barely able to conceal his skepticism at every site, museum, restaurant or place he visited, or at information he was told. For instance, Smith described the DPRK’s explanation of its 1968 capture of the US spy ship USS Pueblo, after it intruded into DPRK territorial waters, as “indoctrination.”

Many imitations of VICE’s style followed, and whether or not you agree with VICE and Smith’s assessment of North Korea, it’s now fair to say “been there, done that.” VICE’s documentaries remain online for viewers and, fair reporting or not, the content of those documentaries should not preclude journalists and documentary filmmakers from looking for other stories to tell in North Korea.

As former leader Kim Jong Il advised in his book On The Art Of Cinema, filmmakers should “aim high in creation!” Young Pioneer Tours have facilitated everything from documentaries on surfing in North Korea to music video shoots – if you can think outside of the box, North Korea can offer unique angles beyond the usual – and now-tired – exposé.

2. Do not film the military

As with many other countries, photos of military installations and checkpoints are generally prohibited. The exceptions to this rule are at the DMZ and military parades. This should not be cause for alarm, and you will not be left to discern when you can and cannot film. For instance, your guides will let you know when your vehicle is approaching a military checkpoint and request that you put your camera down.

3. Do not film construction sites

This rule is connected to the previous rule, as military personnel and soldiers often work at construction sites. 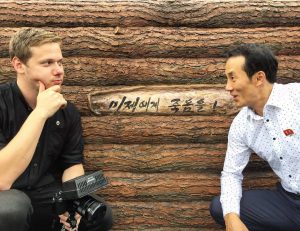 When filming statues and portraits of the country’s leaders – specifically, current leader Kim Jong Un and former leaders Kim Il Sung and Kim Jong Il – do not crop their images. Your shots should be framed to show the image of the leader in its entirety. While this may impact some stylized shots that your director of photography had in mind, it is ultimately an easy rule to follow and as an easy way to build a positive working relationship with your guides.

For instance, while filming in North Korea, this author has made it a point to often defer to guides at sites dedicated to the leaders, such as the famous Mansudae Grand Monument, and ask for input on framing shots. Small acts like this, while they might seem silly to some, will go a long way and create a relaxed shoot. Keep in mind that the North Korean government may later see your material and that your guides did not make the rules and may ultimately have to answer for your content should you decide to push the limits of filming in North Korea.

Additionally, your guides will further appreciate efforts to be well-dressed when visiting sites dedicated to the leaders, and behave as you would at a religious site in another country: no funny faces or handstands, refrain from putting your hands in your pockets and don’t smoke. North Korea may represent an extreme, but is not alone in this respect. For instance, Thailand has meted out harsh punishments to foreigners who defaced images of its revered king and in the Middle East, Jordan, Kuwait and Saudi Arabia have strict lèse-majesté laws in place to protect their royal families from insults. 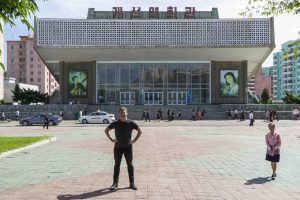 Despite some backlash from negative news stories and documentaries produced on North Korea, restrictions have gradually relaxed since North Korea began to allow more foreigners into the country for tourism and journalism purposes. For instance, when this author first visited North Korea in 2015, the Korean guides still strictly enforced the rules of no filming while on the tour bus – filming was only at approved stops – even in Pyongyang.

When I returned the following year, I visited North Hamgyong province – North Korea’s northernmost province – which opened to Westerners only recently and where filming and photography restrictions were still heavily enforced. However, one of my Korean guides remarked to me, “The other guides told me you take too many photos and film too much. I used to think in this manner, but after meeting many foreigners, I corrected this. Why should we be ashamed if you take a photo of a farmer plowing with an ox? We are developing! We should be proud!”

On that same trip, when we arrived in Pyongyang following our shoot in the Northeast, I was pleasantly surprised to learn that filming rules had been relaxed and I was allowed to shoot freely from the bus, which included mounting my GoPro and filming the entire ride down to the DMZ – shutting it off only when passing military checkpoints!

6. Don’t be afraid to make requests for your North Korea documentary 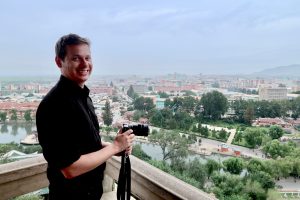 When left to their own devices, your Korean guides will likely stick to the usual routine and take you to mostly pre-approved sites. Changing your itinerary or filming something rarely seen can be difficult, but it is not impossible and there is no harm at all in asking politely. If you have something specific in mind that you would like to see, and make a request in advance, access can in many cases be arranged. This is where establishing trust with your Korean guides becomes valuable. Like people anywhere, if there is a lack of trust and understanding, your guides will have little incentive to try and accommodate special requests. This is why following rules such as not cropping images of North Korea’s leaders is so important as it can lead to access to better content. It’s okay to push the limits, but keep in mind that a firm ‘no’ means no.

Keep in mind also that while nearly every aspect of North Korean life – down to the most mundane things like the design of license plates – may be fascinating to you and the viewers of your North Korea documentary, your Korean guides simply may not understand your fascination. This is not out of bad intent, but might simply because they may not understand your fascination with things they deem as routine or dull.

As a personal example of both of these points, on my third trip to North Korea as a videographer, I became the first American to travel through and film (nearly) the entire Pyongyang Metro system. As you will see in the video, while I was captivated by the unique designs and look of each station, our guide, having lived in Pyongyang her whole life, played a game on her cell phone while I filmed every small detail of the metro.

7. Comply with customs and consider your camera package

It used to be that unless you had a journalist visa, tourists were only allowed small point-and-shoot cameras, and laptops and cell phones were not allowed into the country. Luckily, you can now bring hard drives and laptops into the country, although keep in mind that customs may ask to look at your photos both on the way in and on the way out. On the way in, customs officials will be looking to see what you are bringing into the country, so delete those memes of Marshal Kim Jong Un and your torrented version of The Interview. Such materials, as well as religious materials such as bibles and literature about North Korea not produced in North Korea, will simply not fly. On your way out, customs officers may ask to look through your pictures and, if they see any of military or cropped images of the leaders, may ask you to delete those photos.

As filmmakers, we are lucky that technology has advanced to the point where we can shoot incredibly high quality material on small DSLRs, mirrorless cameras, and GoPros. Portable hard drives for backing up your content are fine as well. As a tourist, you should face no issues bringing these materials into the country. However, lenses with a focal length of 200mm and larger are not allowed, and may be held until you exit the country.

If, however, you intend to bring any cameras larger than those listed above, and/or you intend to do any official journalism or documentary work outside of your own video documenting your trip, you will need pre-approval. Young Pioneer Tours and its partner for film/TV, Pioneer Media, can advise on any specific matters related to equipment and whether your filming can be facilitated under a tourist or journalist visa.

8. People are people – make connections and have fun! 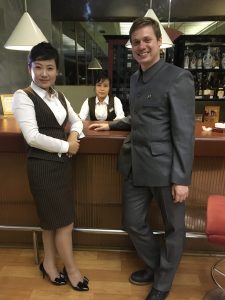 As a tourist or journalist wanting to make a North Korea documentary, remember that the people you encounter are just like you, with a job to do and a family back home. Keep this in mind, put your best foot forward, try to dismiss preconceptions and the Koreans you encounter will likely do the same, resulting in better material for your travel video or North Korea documentary, and making it easier for people who come after you to film in the DPRK.

Justin Martell is a filmmaker and author living in New York City. He has shot documentaries and promotional videos in North Korea and, in 2017, co-founded YPT’s partner, Pioneer Media, offering production services across a wide variety of unique locations from Asia to Eastern Europe. For more information on all of Pioneer Media’s filming locales and services for filmmakers and journalists, visit mediapioneers.net.

Justin Martell is a filmmaker and author living in New York City. He has shot documentaries and promotional videos in North Korea and, in 2017, co-founded YPT’s partner, Pioneer Media, offering production services across a wide variety of unique locations from Asia to Eastern Europe. For more information on all of Pioneer Media’s filming locales and services for filmmakers and journalists, visit mediapioneers.net.

.
< PREVIOUS
Mt Paektu – DPRK Guide
NEXT >
How to get from Seoul to Pyongyang