Hitchhiking is one of the great ways to travel around a country, especially a place like China. It’s usually easy to get a lift from people who are eager to chat or share a meal somewhere. We’ve been picked up by a coal trucker, a Tibetan family in a minivan, and once by a guy on a motorbike who took us back to his house for roast chicken.

It’s not all plain sailing, however, and though we’ve never come across anyone who has been in physical danger while hitchhiking in China, there are some perils to be wary about on the road.

1. Your driver won’t let you leave

This kind of driver is generally so happy to have picked up some foreigners in his car that he’ll do a number of things that you might not expect, or want. The worst is when he takes you somewhere in a totally different direction from where you want to go, to show you some kind of local site, usually of no interest at all. However annoying this, is its done in a friendly way, and sometimes you’ll find yourself invited for dinner. Unless you’re pressed for time this can be good, but if it spirals into a drinking session where he invites all his mates along to show off his new ‘foreign friends’ then you might be stuck wondering when you’ll ever be able to leave. 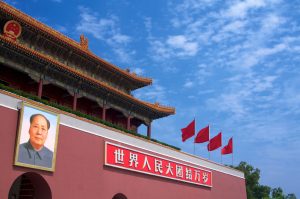 When a driver starts to ask too many questions, and the whole thing gets bureaucratic it’s time to make your apologies and get out of there as soon as possible.

“Where are you from, what do you do in China, and where do you want to go in China?”

So far so good, but then:

“I need a certificate proving your place of work so I know you’re not a trickster. Don’t have one? I need you to phone the local police station in your home country to confirm your credentials with me.”

Er, yeah right. At the sign of the conversation going this way, it’s time to get out.

3. Being in a place you’re not supposed to be, and having no idea

Everyone knows foreigners can’t enter Tibet without a permit, but it’s less well known that there are other places where foreigners might encounter trouble from the police. There are the obvious places, near military installations or prisons, but you might not always know when you’re nearing the vicinity of a place like this. Some places it is clearly written that foreigners are not allowed, like Taibai Mountain in Shaanxi province, and if you try and sneak in the locals will report you to the police. But other places it is quite possible to have no idea at all…

Many years ago, we managed to hitch a lift after having been on the road a while, and we felt pretty lucky when two guys in a nice car driving fast stopped to pick us up. We slept for most of the journey, and as we approached their destination we thought staying a night in a city would give us one night of comfort. The city was a ghost town. A big modern city built in the foothills of the Himalayas that nobody has ever heard of, but there were very few people. As we walked through the main square a police van stopped and we were quickly escorted to the main police station.

The chief of police welcomed us with an angry lecture. “Why are you here? Foreigners are not allowed in this city.” We’re just travelling through, we didn’t know.

“Well, you should have checked on your embassy website the list of places you’re not allowed to go to.” Er, I don’t think such a list exists, and by the way, why are we not allowed in this city?”

That’s none of your business, if Chinese people go to your country, of course, there are places that they are not allowed to visit too.”

Well, not really, just the same places I’m not allowed into too like military bases.

“Stop talking or you’ll spend the night in our cells. When you come to China you should respect the laws of our country. Now go back to the train station and take the first train back, and if you try anything we’ll know.”

We were followed all the way to the huge and empty station and waited 8 hours for a train to take us back the way we had just come from. We never got to the bottom of this mystery – but suspect the area is likely is built for the military, with the PLA stationed nearby and on call for if there are any problems in Tibet. Later on our trip, we had already managed to hitchhike to the middle of nowhere – every time we went to buy food, the locals would cheerfully remark,

“Hey, you know this is a secret site of China’s nuclear weapons program? Yeah, the sign on the motorway before you get here saying ‘coal mine’ is actually where nuclear weapons are stored!”

Explore China with us, or get adventure minus the hassle on a road trip along the North Korean border.

.
< PREVIOUS
We are hiring! Intern positions available
NEXT >
8 things about the cruise ship industry you didn’t know